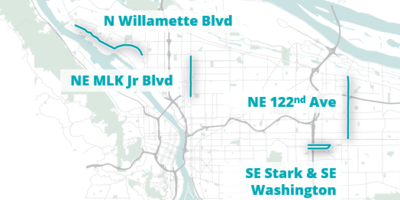 The funding, which is matched by PBOT, is being distributed through Metro’s Regional Flexible Funding Allocation program
Published
March 16, 2022 10:42 am

The four PBOT projects were drawn from projects already identified in PBOT's long-range planning documents and reflect community priorities for active transportation, meaning projects that improve safety for people walking, biking, and accessing public transit. With the funding approved, each project will begin being developed by a team of planners, project managers, and engineers, before starting construction in late 2025 at the earliest.

“All of these projects will bring crucial safety and accessibility improvements to our city, but I am particularly pleased to see over half of the total funds received by PBOT in this RFFA cycle, almost $18 million, invested in East Portland,” said Transportation Commissioner Jo Ann Hardesty.

A high crash corridor, NE 122nd Avenue currently has long distances between safe pedestrian crossings. The funded improvements on NE 122nd Avenue include new signalized street crossings at or near NE Beech Street, NE Sacramento and Brazee streets, near NE Broadway and Hancock, and between NE Wasco and Multnomah. PBOT is currently completing a comprehensive corridor plan for 122nd Avenue, and these locations were selected based on public feedback as well as staff analysis. The total project budget is $6.4 million.

Like many cities, most of the funding for capital improvements available to PBOT come from other agencies, mostly Metro and ODOT, often using state or federal revenue sources. Much of transportation funding is tied to particular projects or types of projects, but the regional flexible funds are a rare example federal funds that allow metropolitan planning agencies broad discretion in the kinds of projects they finance. PBOT and regional partners have long prioritized using this funding to build improvements that will make our community safer for people to walk, bike or access public transportation.