PBOT urges the public to travel with care, as COVID-19 pandemic continues to contribute to unsafe travel behavior across the U.S., Portland

In 2021, there were 61 people killed on streets and highways in Portland, significantly higher than the 54 in 2020, and more than any year since the early 1990s.

Typically, most pedestrian fatalities occur in neighborhoods and commercial districts along Portland's high-crash corridors -- the busy, multi-lane arterial streets that are less than 10 percent of city streets but account for most of the traffic deaths in Portland. However, during the Covid-19 pandemic, there has been a rising number of pedestrian traffic deaths in areas zoned for industrial land or open space. In 2021, there were 12 pedestrian deaths in these areas, compared with fewer than four on average from the prior four years.

“2021 was a tragic year for traffic related violence here in Portland. First and foremost I want to send my deepest condolences to all the families and friends who lost a loved one on the streets of Portland this year," Transportation Commissioner Jo Ann Hardesty said. "Transportation in Portland has a multi-billion-dollar backlog of safety and maintenance needs that I am determined to address. We have made significant progress in making our streets safer during this last year, including the urgent safety interventions I funded through a budget amendment last Summer and with the upcoming transfer of 82nd Avenue from state to city control. While we move forward these important safety investments, everyone in Portland can take action today to make our streets safer: Slow down, look out for people walking and biking, and never drive while impaired."

Multnomah County is a partner in the city's Vision Zero effort to end traffic deaths and plays a key role in providing services for houseless community members.

“Too often, crashes and deaths are viewed as the result of individual acts or random circumstances, but we know that we cannot improve safety without understanding the patterns, trends and disparities behind the numbers,’’ Multnomah County Chair Deborah Kafoury said.

Figures for 2021 are preliminary, and it takes years for trends to emerge, but the data available appear to point to several patterns:

During the Covid-19 pandemic, there has been an increase in pedestrian traffic deaths in areas zoned for industrial land or open space. In 2021, there were 12 pedestrian deaths in these areas, compared with fewer than four on average from the prior four years. 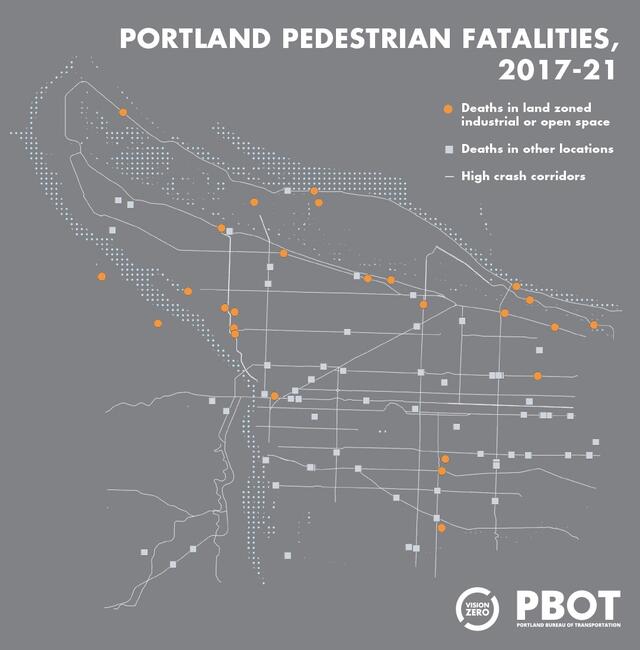 Traffic deaths on city-controlled streets held even during the pandemic

Traffic deaths on streets controlled by the City of Portland have held roughly constant during the pandemic, and they even dropped in 2021 compared with recent history. There were 29 traffic deaths in 2021 on city-controlled streets, compared with 34 in 2020 and 33 in 2019.

"Even amid the sad news of higher traffic deaths in 2021, we see some signs that our Vision Zero effort to end traffic deaths is saving lives," Transportation Director Chris Warner said. "Where we have made investments that transform our streets into places designed with safety first, we are seeing less of the dangerous speeding that contributes to traffic deaths. We will continue to use the best data and best practices from across the nation, so we can emerge from this pandemic with streets that are safer for everyone."

Despite a historically high number of fatalities in 2021, there are signs that the City of Portland’s adoption of Vision Zero as its traffic safety goal in 2015 is already making streets safer:

PBOT and Portland Police often report different figures for traffic fatalities. PBOT uses federal and state guidance that provide a uniform definition of traffic fatalities across the nation. This excludes people who died intentionally, in an act of homicide, more than 30 days following a crash, in a crash not involving a person driving, or due to a medical event.

Fatal crash figures are preliminary for 2021. Final figures for fatalities and data for traffic injuries are expected from the state of Oregon in 2023.