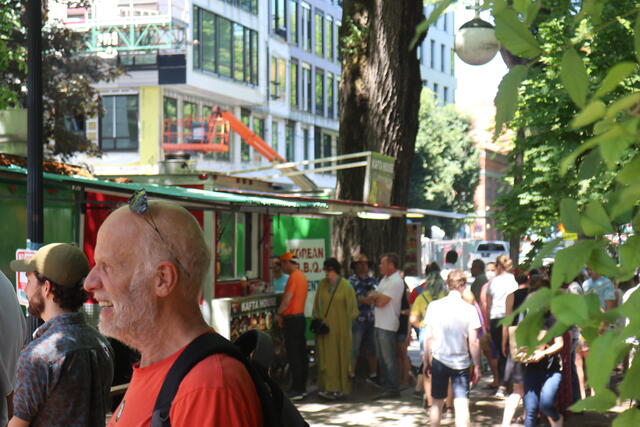 Portlanders enjoyed food and downtown outdoor gathering space at The Cart Blocks on opening day on July 24. The relocation to a new site downtown wasn't easy - for the food cart owners or the city officials who helped create the new site. Photo by Benjy Ross / Portland Bureau of Transportation.

(Sept. 7, 2021) In 2019, a collection of 55 food carts in a parking lot at SW 10th and Alder Street was considered the largest and one of the most popular cart pods in the state of Oregon. Then they received horrible news: the parking lot where they were operating would be redeveloped, and they would need to leave. Two years later, they finally reopened at a brand new location: The Cart Blocks, at West Burnside and Park Avenue.

But it wasn’t easy.

Fernando Rodriguez, owner and cook at Fernando’s Alegria at The Cart Blocks, had owned his cart at the previous location for over five years. He feels grateful for the ability to reopen, but two whole years was a long time not to operate, especially under the additional pressure of the COVID-19 pandemic. 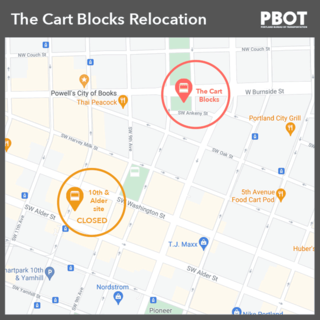 The story of The Cart Blocks relocation reflects the challenge of moving many small businesses from a single block with a single owner to a patch of publicly owned parcels, including a tiny park and narrow asphalt streets not designed for buildings.

It wasn't easy for the city, or the food cart owners.

Jane Kim, owner of #1 Bento, also one of the food cart owners at the previous location now operating at The Cart Blocks, told her story to the whole crowd at the grand opening ceremony. Kim had previously owned a brick-and-mortar restaurant in Lake Oswego, but after high rents of over $10,000 a month forced her business out, she decided to pack up and serve her food out of a cart. Not long after she opened her cart, she was told she had to leave. 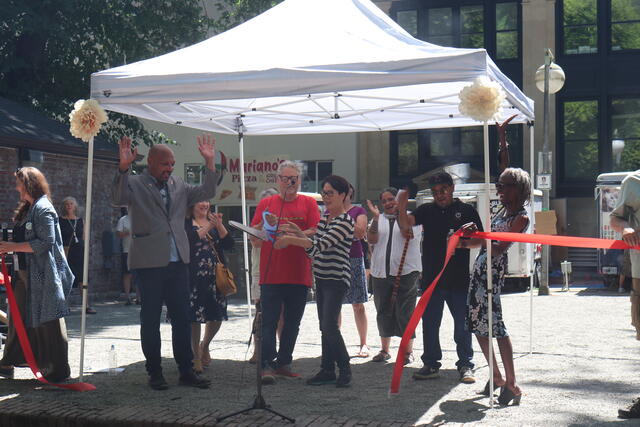 City Commissioners Jo Ann Hardesty, Carmen Rubio, and Mingus Mapps all attended the grand opening of The Cart Blocks. All spoke of the cultural and economic benefits of food carts in Portland. All spoke of the cooperation needed to pull this relocation off.

In the parking lot, the cart owners answered to one landlord on a privately owned parcel ready for buildings such as restaurants. This relocation was a large project for the city, requiring the cooperation of multiple bureaus including the Portland Bureau of Transportation (PBOT) and the Portland Parks & Recreation. A budget proposal by Mayor Ted Wheeler gave the project momentum, and support from virtually every city council office cleared the way.

When the relocation of the food carts first came up, then-PBOT Commissioner Chloe Eudaly advocated for using public street and park space as their new home. The idea found ready champions in the Friends of the Green Loop, which helped focus on a small park known as known as Ankeny Square at the North Park Blocks, a patch of the Park Blocks bounded by West Burnside Street, SW Park Avenue, SW Ankeny Street and SW Eighth Avenue.

The organization advocates for the development of the Green Loop, a plan to develop a ring of lush green urban pedestrian corridors and plazas through downtown, the Lloyd District and Central Eastside. The North and South Park Blocks are the main corridor for the downtown portion of the future Green Loop.

Friends of Green Loop and other organizations had been advocating for the revitalization of the south end of the North Park Blocks and the Ankeny alleyway for a long time. 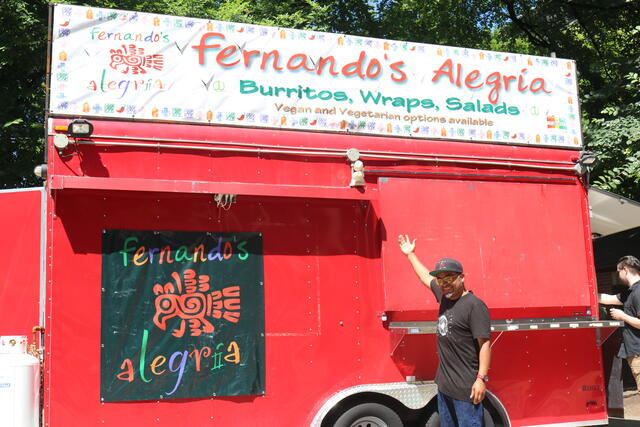 Fernando Rodriguez, owner of Fernando’s Alegria in front of his food truck at Cart Blocks during the grand opening. Photo by Benjy Ross / Portland Bureau of Transportation

Friends of Green Loop came up with the Culinary Corridor idea. This notion was to transform the portion of the Green loop corridor stretching from Burnside and Ankeny West all the way down to the farmers market at Portland State University by creating a nexus of local and international cuisine. The idea is to line that portion of the green loop with food carts and pedestrian-friendly spaces to create an internationally coveted culinary experience, bringing in droves of visitors and locals.

When Friends of Green Loop got word of the displaced food carts, they knew this was their chance to act. They wanted to get these food carts back up and running as soon as possible, but quickly ran into a huge roadblock. This area simply didn’t have the infrastructure to house food carts. Food carts need flowing water, electricity, and even a natural gas line -- none of which the park or streets had the capacity to supply. Not to mention that the park itself sits on a tiny half-sized city block and couldn’t hold many food carts unless an out-of-the-box idea was put into play.

People had doubts that the project could even be done. Designers finally came up with a plan to transform the narrow streets surrounding the park into a place where the carts could operate, saving space and allowing for more carts. But this still left the problem with utilities.

“PBOT had a great team of people from a variety of disciplines working on this project," said David McEldowney, Interim Right of Way Management and Permitting Manager. “Streets needed to be closed to vehicles, access to adjacent businesses needed to be maintained, and traffic control was needed. In addition to the coordination taking place above the surface of the streets, PBOT had an immense number of utilities beneath the ground which required a lot of coordination to ensure that the food cart pod didn’t conflict with access to such things as air vents, valve covers and access lids, and without a ready source of power available, a creative solution would be needed to service the food carts.”

This was going to be hard and expensive. Decisive support from the City Council and cooperation among bureaus and utilities were needed. When Mayor Ted Wheeler's proposed budget allocated $269,000 to the project April 29, and with City Council approval two weeks later, all the financial barriers finally went away. To speed up the process even more and make it cheaper for the businesses, the city waved all permit fees the food cart owners would have to pay for the construction and use of the site.

Now the project just needed to get done.

“There are rules and codes in place, standardizing how utilities should be placed, designed, and constructed,” McEldowney said. Downtown Portland is in what is called an underground wiring district. This means that all wires -- power, phone, or Internet -- are all placed underground, rather than overhead, as is common in residential areas. “This underground wiring district had depth requirements for how deep the utilities needed to be buried, but this just wasn’t feasible for a food cart pod. This was seriously getting in the way of the project’s completion.”

With the recommendation from PBOT, city hall waved these regulations for this special case. Finally, they could continue the project.

“The easiest, cheapest and most convenient way for the food carts to get power was to run the conduit from the park to the street, and then along the curb face,” McEldowney said. “Extra efforts had to be made to keep the sidewalks ADA accessible due to the above ground utilities.”

But with funding, the construction swiftly came to completion. 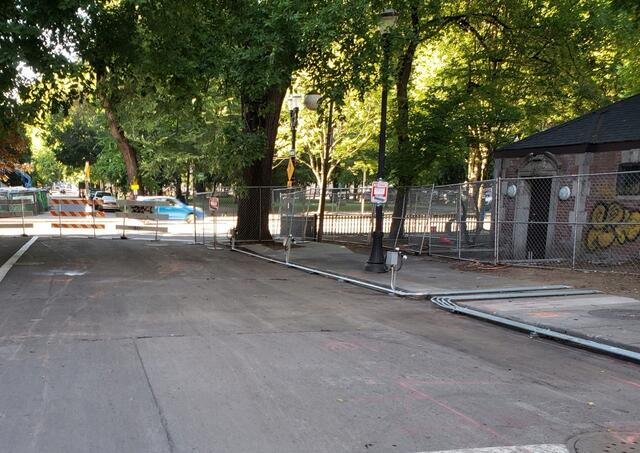 Utilities are visible on SW Park Avenue in this photo taken during the development of the site for The Cart Blocks. PBOT staff worked to provide utilities, which were covered up by the carts and ramps to make the area comfortable for customers accessing the carts. Photo by David McEldowney / Portland Bureau of Transportation.

The small businesses, owned by mostly immigrant and BIPOC Portlanders, now have a new home and other carts have joined them at the new location.

“I have a good feeling we’ll be here for a long time,” Fernando said. “With the city behind our back and their public word supporting us, it will be hard to uproot this community again.”

Portland Public Street Plazas
About the Green Loop
What is the Safe Streets Initiative?