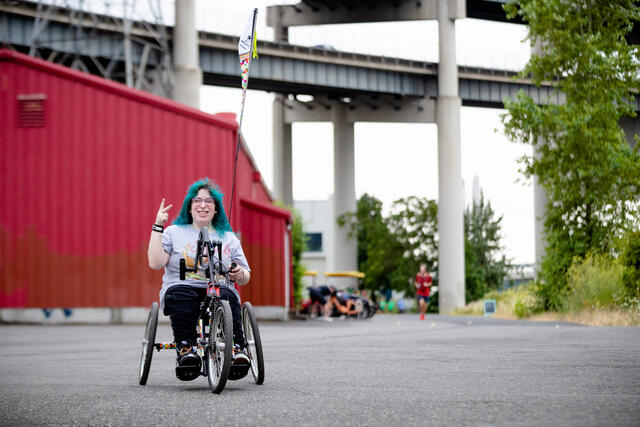 (Sept. 28, 2021) Ashley Crawford came all the way from Sandy, Oregon to try out Adaptive BIKETOWN. She only recently found out about the service that offers short-term rentals of bicycles that provide extra stability.

“For me, it means independence and...being able to ride a bike and go out and do fun things that maybe people in wheelchairs don’t get to do," Crawford said. "And it’s freedom and fun!” 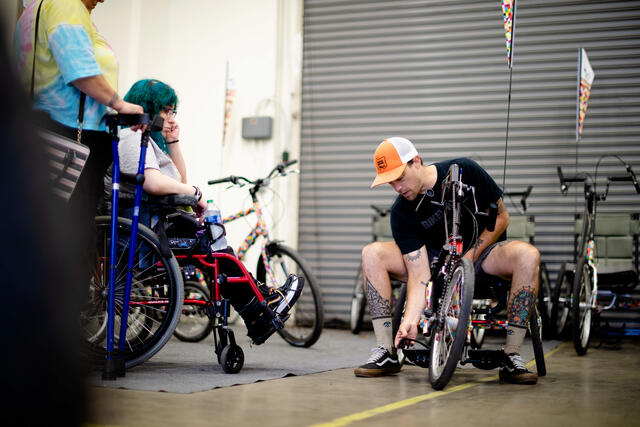 Ashley Crawford gets fitted to an adaptive bike by a Kerr Bikes staff member. Photo by Jordan Beckett Photo.

The event expanded the reach of the Adaptive BIKETOWN program by partnering with a community organization directly involved with people experiencing Parkinson's and family members. Adaptive cycling can be a great way for people with movement disorders like Parkinson’s to exercise and have fun.

She said that this event was a great opportunity for people to learn about the types of adaptive equipment and try it out without having to make a big financial investment.

She hopes that people come away from the resources fair with a hopeful, potentially life changing experience.

"Even while you have some physical limitations you can still do so many things and this equipment, these bikes allow you to continue on...if you are at a point where you don’t feel comfortable on a two-wheeled bike, or wherever you are in your cycling and in your progression.”

She also added that while Parkinson’s Resources is focused on Parkinson’s, there were lots of attendees of the fair with other movement disorders who also greatly benefit from adaptive cycling options.

Adaptive BIKETOWN is PBOT’s program that aims to increase biking access for people with disabilities and movement disorders. Launched in 2017, the program recently expanded its fleet from 20 to 27 bikes, and offers personalized fittings to help each person find the bike that’s right for them. Bikes are rented from Kerr Bikes, which is right on the east waterfront near OMSI, so people are able to bike in a car-free environment along the waterfront bike path. Adaptive BIKETOWN offered free rides throughout the month of July, and at the fair, dozens of people got to try out the adaptive bikes. 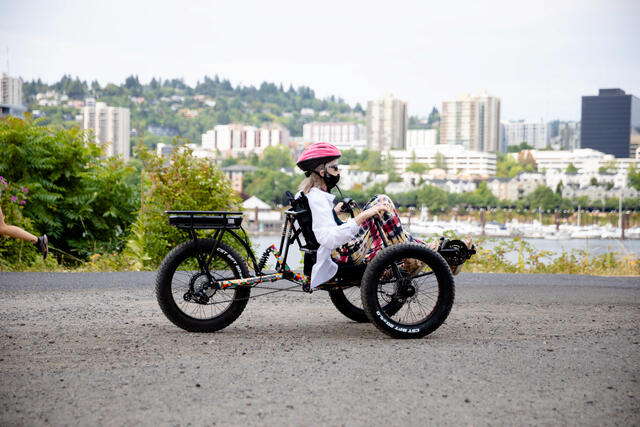 Phyllis Frus, who has Parkinson’s, said that she’s biked all her life, and stopped when she was diagnosed with Parkinson's.

“I missed it so much, so I thought I’d try a three-wheeler.” She loved her test ride and says she wants to explore more cycling options.