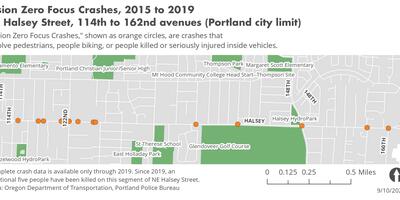 (Sept. 10, 2021) The Portland Bureau of Transportation (PBOT) will implement an emergency speed limit reduction on a 2-mile section of NE Halsey Street, a high crash corridor in East Portland. It is the first of many urgent street safety interventions authorized by a budget amendment crafted by Commissioner Jo Ann Hardesty to respond to a dramatic rise in traffic deaths.

The new speed limit will be effective when PBOT crews change signs on the corridor on Monday morning, Sept. 13.

The emergency speed limit reduction is a rare, dramatic step in the city's effort to achieve Vision Zero, the goal of eliminating all traffic deaths.

As with all cities in Oregon, the City of Portland generally does not control the speed limit on city streets, even streets that the city owns and maintains. PBOT makes requests for speed limit reductions to the Oregon Department of Transportation (ODOT), which controls speed limits statewide. PBOT has made dozens of requests to lower speed limits on busy streets, which often takes a year or longer for state officials to consider. These requests are not always approved.

State law allows the city to establish an emergency speed limit, and PBOT Director Chris Warner approved the change under that provision. NE Halsey has had a sharp uptick in serious crashes, especially involving pedestrians. No pedestrians were killed from 2015 through 2018, but four have been killed in traffic crashes since 2019.

In addition to the speed change, the bureau will break ground on the Outer Halsey Safety Project later this month to construct two new pedestrian crossings, add street lighting, upgrade curb ramps to meet ADA guidelines, and complete sidewalk infill on NE Halsey Street between 114th and 162nd avenues. The new crossings will be constructed at NE 119th and 128th avenues and will include two concrete pedestrian islands equipped with rapid flashing beacons. Almost a mile of new sidewalk will be constructed, filling in gaps between pre-existing segments, along the length of the corridor. The new 30 mph speed limit will support both a safer work zone in the near term and, if made permanent, safer use of these new facilities once they are complete. Outer NE Halsey Street serves Portland neighborhoods with a disproportionately high number of lower-income people and people or color or Latinx (of any race), making it a high priority for safety improvements for PBOT.

"The vehicular violence on our streets is unacceptable, and it is taking the lives of our neighbors who are too often exposed to high crash corridors, especially in East Portland," said Commissioner Hardesty, who oversees PBOT. "I directed PBOT to identify and plan out actions that could be taken to provide safety improvements that can prevent traffic deaths as quickly as possible. I am so glad that Director Warner is taking this decisive action. I look forward to the other steps the bureau has identified with the funding the City Council provided this year."

In a letter to ODOT announcing the decision, Warner noted the rise in pedestrian deaths on Halsey and wrote: "We do not take this step lightly."

"Speed is a critical factor in the severe crashes that are taking the lives of Portlanders and causing life-altering injuries," Warner said. "This emergency speed limit reduction is just one of many safety efforts we have in the works that are enabled by Commissioner Hardesty's leadership. I encourage everyone to take a moment to slow down and consider your fellow Portlanders when you get behind the wheel. With swift action to reduce speeds and a burst of small safety projects approved by council this year, we are better positioned to reduce traffic fatalities."

High-risk speeding dropped significantly after safety projects went in on corridors like SW Capitol Highway, and along NE Glisan Street and NE 102nd Avenue in East Portland. People driving 10 mph or more above the speed limit declined by 73-87% after safety improvements were installed.