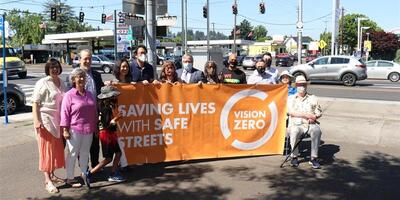 The legislature's allocation follows an earlier agreement between PBOT and ODOT that it will cost $185 million to bring 82nd Avenue to a state of good repair and basic safety. The agreement, which the two agencies sent in a letter to the legislature on May 28, also included a plan to achieve the long-sought community goal of transferring the jurisdiction over 82nd Avenue, which is officially a state highway, OR 213, from the state to the City of Portland. Now that the state has committed the funding, PBOT and ODOT will begin work on an agreement to execute a transfer of the roadway.

In addition to state funding, ODOT has pledged $70 million and PBOT has committed $35 million. Together the $185 million will deliver upgraded signals, lighting, ADA ramps, pavement, and stormwater facilities. The funding will also allow PBOT and ODOT to accomplish the most urgent sidewalk and pedestrian crossing improvements in the next four years.

“I’m thrilled that leaders like Representative Pham and Commissioner Hardesty, with the support of local advocates like Oregon Walks, the Street Trust, and APANO, were able to secure this funding to bring 82nd Avenue into local ownership. I’m excited to be a partner with PBOT on the future of this new Main Street,” said Congressman Earl Blumenauer, who advocated for transferring ownership of 82nd Avenue when he was a state legislator as well as a Portland City Commissioner. “There are 82nd Avenues all over the country that, instead of building neighborhoods up, are dragging them down. I look forward to supporting this investment with funding we are working to secure as part of the federal infrastructure package.”

"The state's $80 million investment in 82nd Avenue is a matter of equity. Improving safety on this state highway will build a safer future for the diverse communities of East Portland," said House Speaker Tina Kotek. "I'm please we could seize an opportunity this session to make this critical investment, and I have tremendous appreciation for the local advocates who helped make this happen."

"This long-awaited investment will transform 82nd Avenue from a dividing line in the city to a roadway that brings communities together," said State Representative Khanh Pham. "Our work begins to bring to life a vision for East Portland that is safe, easy, and convenient for residents to live and go where they need to go. Along 82nd Avenue, there are many families, schools, and businesses, as well as the bus line with the biggest ridership in the tri-county region. This road has the potential to be a connecting force in the geographic heart of Portland."

“82nd Avenue isn't just a state highway or a city street. It’s the spine of the community. It’s a vital thoroughfare that residents rely on,” said House Majority Leader Barbara Smith Warner. “And East Portlanders deserve a street that is safe, well maintained and that they can be proud of. It was past time to fund these changes, and so I’m very happy that my colleagues and I have finally been able to deliver for our constituents.”

"This historic state investment will make it possible for the state and PBOT to begin making the transformational changes the community has been calling for on 82nd Avenue for decades," Transportation Commissioner Jo Ann Hardesty said. We are committed to working with ODOT and other partners to find the additional resources needed to make a corridor that will help us achieve our Vision Zero goal of eliminating traffic fatalities from Portland streets. I’m grateful to all the community advocates and elected officials that made this happen through a process that highlights the importance of diversity in representation for East Portland.”

"82nd Avenue is both one of our most important and one of our most dangerous streets. Every day, Portlanders use this roadway to get to work, school, and play,” said PBOT Director Chris Warner. “Thanks to the leadership of our elected representatives and the dedication of our community advocates, we have taken a giant step toward a better, safer 82nd Avenue. We’re going to get to work immediately to deliver on our promise to East Portland."

“These improvements are long overdue,” said Rian Windsheimer, ODOT’s manager for the Portland area. “We owe a big thanks to the Oregon Legislature for making this happen and setting it in motion quickly so we can get these improvements started. It won’t be long before the community sees these upgrades.”

"Our community has been voicing concern over 82nd Avenue for many years and now we are heading in the right direction," said Ashton Simpson, Executive Director of Oregon Walks. "We have seen so many lives lost or permanently damaged on this road and this is our opportunity to reimagine a better 82nd Avenue. I want to thank Representative Pham for her leadership in the jurisdictional transfer of 82nd; she has played a pivotal role in bringing attention and awareness to 82nd. I would also like to thank Director Warner and the outstanding staff at PBOT for their work in negotiating a deal with ODOT and the state legislature. This is a huge win for our community and I look forward to working together to bring equitable development to residents of East Portland!"

"Thanks to the hard work and persistence of many community-based organizations calling for safe, accessible, and affordable transportation on 82nd Avenue, the community can finally look forward to seeing improvements on this deadly street," said the co-leader of the Getting There Together Coalition, Kari Schlosshauer. "The Getting There Together Coalition is delighted to see the Oregon Legislature provide critical transportation investments that will allow the transfer to local control of 82nd Avenue, where a history of exclusionary transportation planning and neglect of non-vehicle travel has resulted in an immense need for transit access, sidewalks, and safety improvements."

While many of the changes will take place over the next four years, PBOT shared that Portlanders will begin to see safety upgrades in the near future. Thanks to prior efforts to secure funding made by ODOT and PBOT, numerous pedestrian crossings will all be improved in the next 12-24 months, including where 82nd Avenue crosses NE Alberta, Beech, Pacific, and Davis streets and SE Ash, Mitchell, Ogden, and Knapp streets. With funding now in place, the bureau will also begin project development on additional crossing locations. The bureau will also improve street lighting along the corridor, at crosswalks and where lighting is missing along 82nd Avenue, specifically stretches north of Sandy Boulevard and south of Division Street.