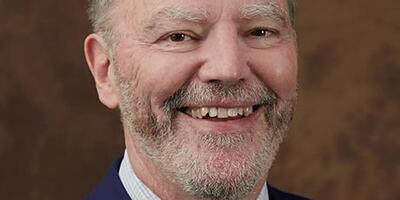 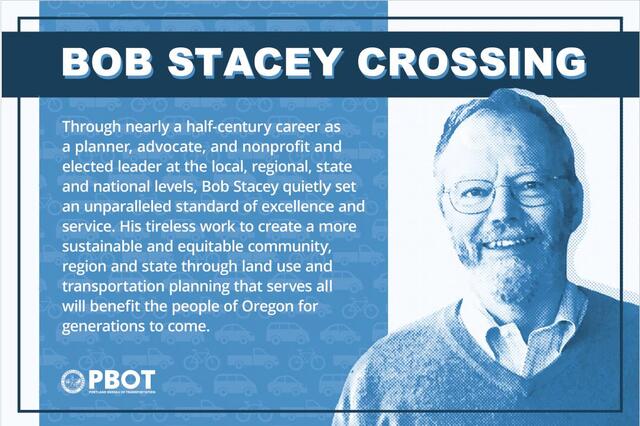 This image shows the plaque that was mounted to the Bob Stacey Crossing today, naming Portland's newest bike and pedestrian bridge after a longtime local leader in sustainability and transportation planning.

The bridge was built by TriMet just east of the Clinton St. / SE 12th Ave MAX Station, crossing above the MAX Orange Line and the Union Pacific Railroad tracks. It was opened in November, initially called the Gideon Overcrossing, referring to a nearby street, and is owned and maintained by PBOT.

PBOT Director Chris Warner made the surprise announcement at a Metro Council meeting that Stacey attended this afternoon, and unveiled a copy of the plaque that was installed on the bridge today.

“It’s an honor to name Portland’s newest bike and pedestrian bridge for Councilor Bob Stacey,” Warner said. “Bob has always understood that how we get from place to place is critical to building a more sustainable, safer and more equitable community. Thanks to his commitment to public service and his belief that there is always a better, fairer way to do things, Bob has achieved what I think all of us in public life strive for: to create a lasting legacy of helping our neighbors and improving our community.”

"No one has been more deeply involved in shaping our quest for livability than Bob Stacey. For over 40 years, he has been involved with nonprofit advocacy and in the city, state, regional government and TriMet," said U.S. Rep. Earl Blumenauer. "More recently, as an elected official at Metro, he continues to be a powerful voice of reason, inclusion and principle. The ideal role model for citizens who want to protect our future while managing the present."

“Bob has been a champion for the Oregon we know and love today,” said Metro Council President Lynn Peterson. “From fighting the Rajneeshees’ abuse of Oregon’s land use system in Wasco County, to protecting our environment through modern development rules in the Metro area, Bob has been a huge part of Oregon’s history. This bridge, connecting a neighborhood he loves to a pioneering mass transit system he helped develop, is a fitting recognition of his decades of service to our region.”

“It’s been a privilege to have known Bob Stacey going back 3 decades," said Portland Transportation Commissioner Jo Ann Hardesty. "Since we first got to know each other, it’s been clear just how committed he is to good land use and transportation planning. I can’t think of a more appropriate name for this pedestrian bridge than calling it Bob Stacey Crossing to honor his legacy.”

“Bob has always been a visionary, linking land use and transit,” said TriMet interim General Manager Sam Desue, Jr. “Both during his tenure at TriMet and elsewhere, he has been a strong advocate of TriMet and the work we do to provide safe and reliable transit service throughout our community. He wholeheartedly supported and advocated for the Portland-Milwaukie Light Rail Project.As TriMet built the new pedestrian bridge using remaining project funds, we couldn’t envision a more fitting way to honor Bob’s contribution to transit than to have his name on it.”

A Portland native, Stacey was a partner at Ball Janik LLP and has served as a senior policy advisor to Gov. Barbara Roberts, a chief of staff to Congressman Blumenauer, and executive director for policy and planning at TriMet. He has also served as Portland’s planning director and as the executive director of 1000 Friends of Oregon, the nonprofit founded in 1974 by Henry Richmond and Governor Tom McCall to support their vision of Senate Bill 100 and our state’s iconic land use planning system. In this same McCall spirit, on behalf of 1000 Friends, Stacey sued Metro to tighten restrictions on the region’s urban growth boundary.

At Metro, he remains passionate about building affordable housing in the region, the efficient use of land and the protection of farms and forests, and investing in a robust bicycle, pedestrian, and transit network throughout the region. He serves on the Metro Policy Advisory Committee (MPAC), the region’s roundtable on land use and regional issues, and liaises to Metro’s Transit Oriented Development steering committee and on the HB 2017 Transit Advisory Committee. Stacey worked directly with staff, community partners, and local leaders to plan the region’s latest high-capacity transit lines—the Division Transit Project and Southwest Corridor light rail.

Stacey has been a staunch advocate for more housing density and prioritizing affordable housing near MAX stations. His most recent work is to help push the Portland metro region to adopt congestion pricing, speaking the truth about induced demand on city highways, lessons he has learned from watching cities like Atlanta, Houston, and Los Angeles make poor choices.

Stacey graduated from Parkrose High School in East Portland, earned a bachelor's in political science from Reed College in Southeast Portland and a law degree from the University of Oregon. His senior thesis at Reed, titled "Governmental structure v. environmental planning: Bonneville Power's hydro-thermal program," shows his early interest in the role of government in making a more sustainable world.

He and his wife Adrienne share their Southeast Portland home with a daughter, son-in-law, and two grandsons.

About the Bob Stacey Crossing

The Bob Stacey Crossing, which opened Nov. 10, 2020, takes travelers from SE 14th Avenue north of the tracks to SE 13th Place at Gideon Street, near the Clinton St / SE 12th Ave MAX Station, on the south side. The bridge provides a north-south connection above busy MAX and Union Pacific freight rail lines.

The $15 million bridge was deferred during the development of the Portland-Milwaukie Light Rail Project (which built the MAX Orange Line) in 2010. But with the strong support of Stacey, PBOT, federal partners, and community members, TriMet successfully secured approval from the Federal Transit Administration (FTA) to construct the bridge using some of the remaining funds from the MAX project.

The bridge includes a variety of new features intended to make it convenient and comfortable for people using bicycles or mobility devices. The elevators are large enough to accommodate bicycles with a trailer or child’s tag-along attachment. The pass-through elevators allow people to enter on one side and exit on the other side, avoiding the need to go backwards or turn around, with a mobility device or a large bicycle. More details are available in a PBOT news release from opening day.

The Bob Stacey Crossing is owned, operated and maintained by PBOT.