PBOT to lower speed limit on 5.5 miles of 122nd Avenue to improve safety on a high crash corridor

122nd Avenue is one of the most dangerous streets in Portland a difficult and stressful environment to walk, bike, cross the street, and access transit. PBOT has installed crossing beacons such as this one, and more safety investments are planned. PBOT will lower the speed limit on Wednesday. Photo by Portland Bureau of Transportation.

(April 20, 2021) The Portland Bureau of Transportation will reduce the speed limit from 35 mph to 30 mph on 122nd Avenue between NE Sandy Boulevard and SE Foster Road on Wednesday morning, April 21. The new speed limit takes effect when the signs are changed along this 5.5-mile section of 122nd Avenue.

One of the most dangerous streets in Portland, 122nd Avenue had 12 traffic fatalities from 2016 to 2020, an average of more than two per year. From 2012 to 2016, five of the intersections with the highest crash rates in all of Portland were on 122nd Avenue. High crash corridors make up only 8% of the streets citywide, but they account for most of the traffic deaths from year to year.

Together, high crash streets and intersections make up the High Crash Network, where the city's Vision Zero program focuses safety improvements. The program prioritizes safety investments in areas, such as the 122nd Avenue corridor, where there are higher concentrations of communities of color and people living on low-incomes. Black Portlanders and other people of color suffer disproportionately from traffic deaths and serious injuries.

122nd Avenue is especially dangerous for pedestrians during nighttime hours. Pedestrian crashes on 122nd Avenue are 50% higher than the citywide average. Nearly half of pedestrian crashes on 122nd Avenue occur at night, compared with only 28% of crashes involving people in vehicles or riding bikes. Slower speeds are especially important at night because they help people driving see other travelers and give drivers more time to react.

The speed safety cameras on 122nd Avenue will begin issuing warnings on April 21 and the system will resume issuing citations on May 5 under the new speed limit of 30 mph. Orange flags will highlight the new 30 mph speed limit signs for about 30 days after installation. The speed safety cameras on 122nd Avenue are located near SE Steele Street (southbound) and SE Reedway Street (northbound). Penalties from a speed safety camera are the same as a speeding violation initiated by any other means. Speeding citations in Oregon include a presumptive fine that ranges from $120 to $440, depending on the speed over the limit.

PBOT speed safety cameras are designed to remind the public to slow down, not to issue the most citations possible. Before they reach a fixed speed safety camera, drivers pass by warning signs with the posted speed limit and an electronic sign showing the vehicle's actual speed. Photo by Portland Bureau of Transportation.

Portland operates cameras for speed enforcement on four corridors. Unlike cameras that police use — in vans that move around the city — these "fixed" speed-safety cameras are stationary, usually mounted to a pole.

You can learn more about the speed safety program and other camera locations on our Vision Zero Dashboard.

Speed limits on major streets in Portland and across the US have historically been based primarily on how fast people drive. The faster people drive, the higher a speed limit is set.

For the most part, PBOT does not have the authority to change speed limits on city streets. PBOT makes requests for speed limit reductions to the Oregon Department of Transportation (ODOT), which controls speed limits statewide. 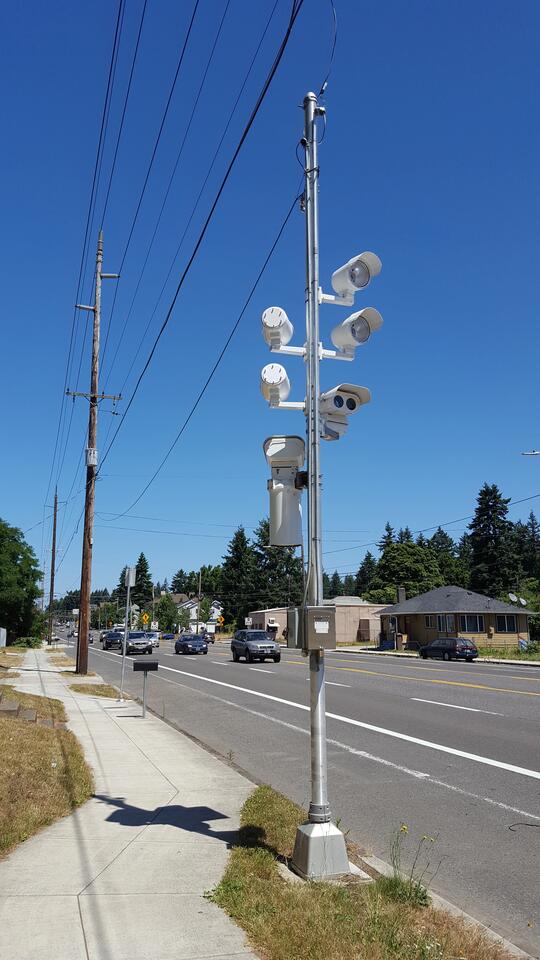 The new speed limit on 122nd Avenue is among the first speed limits in Portland set with a new statewide method that considers street design, pedestrian and bike activity, and other factors related to safety. ODOT adopted the new method in 2020 in collaboration with PBOT and other jurisdictions.

A segment of West Burnside Street was the first street in Portland to get a new speed limit under the rule. PBOT updated the speed limit last month after first requesting a lower speed limit in 2016 and unsuccessfully appealing the rejection in 2018, before resubmitting the request under the new method last year.

Since 2018, PBOT has been developing the 122nd Avenue Plan, a comprehensive plan for how to improve safety, access, and public transit along 122nd Avenue between SE Foster Road to the south and NE Marine Drive to the north. Currently, the corridor is a difficult and stressful environment to walk, bike, cross the street, and access transit. The street — typically a five-lane road with on-street parking — has narrow bike lanes that become turn lanes at major signalized intersections, narrow and substandard sidewalks, crosswalks that do not meet the City's crosswalk spacing guidelines, buses that experience delay, and gaps in streetlighting that contribute to personal safety concerns.

The goal for the 122nd Avenue Plan is to increase safety for everyone, improve pedestrian and bicycle access, and support better transit while balancing the needs of freight and other modes. To address these goals, the plan will make recommendations on needed changes to the street cross-section, additional enhanced crossings, intersection and/or signal modifications, ADA upgrades, additional lighting, enhanced bike facilities, transit improvements, and more.

In the winter of 2018/2019, we engaged with community members and organizations to hear feedback about potential changes to the corridor, as well as help prioritize crossing locations and near-term improvements. The project team has used this feedback to further analyze cross-section alternatives, refine and prioritize the list of proposed crossing locations, and develop a multi-modal investment plan for the corridor. These recommendations will be shared with the public in June 2021 for review and comment before being incorporated into a final plan later this year.

The Rose Lane Project has identified two potential near-term projects on 122nd Avenue to improve public transit reliability, one at NE Halsey and the other at SE Holgate. Feedback on these Rose Lane projects as well as other elements of the plan will be solicited this summer as part of the 122nd Avenue Plan public engagement process. Sign up for email updates about the plan.

Learn more about safety projects that are in the works, safety education programs and safety camera operations at the Vision Zero Dashboard