Press Release
Nine new projects will begin construction in 2022. The projects, which emerge from the City Council-approved Central City in Motion and Rose Lane Project plans, are designed to improve the speed and reliability of transit, provide dedicated space for people who bike, and to make streets safer regard
Published
December 7, 2021 10:22 am

(Dec. 7, 2021) The Portland Bureau of Transportation (PBOT) is gearing up for a busy construction season in the Central City in 2022.

Nine new projects will begin construction in 2022. The projects, which emerge from the City Council-approved Central City in Motion and Rose Lane Project plans, are designed to improve the speed and reliability of transit, provide dedicated space for people who bike, and to make streets safer regardless of how you travel. 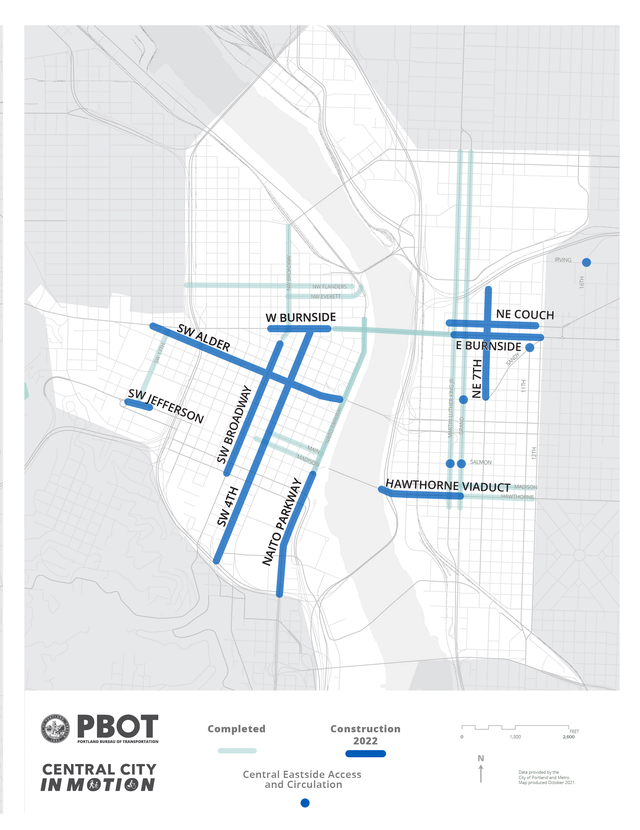 Central City in Motion is PBOT's effort to prioritize transit, walking and cycling improvements in the city’s core. Eighteen projects were prioritized through this planning effort adopted by City Council in 2018. They include new pedestrian crossings, bikeways, and bus lanes. A “Rose Lane” is a transit route where buses and streetcars have priority on the road in congested areas. Through the Rose Lane Project, PBOT is giving buses and streetcars priority on the road, helping more Portlanders get where they need to go more reliably and quickly.

“While these projects may be physically located in the Central City, their impact will be felt citywide,” said Transportation Commissioner Jo Ann Hardesty. “By making improvements to how buses travel through the city core, we can make transit faster and more reliable for everyone along the route.”

“The construction of these projects comes at a crucial time for Portlanders, with many people beginning to return to offices downtown and resume their commutes. We are grateful to our partner organizations for supporting these improvements that help make everyone’s commute better, no matter how you travel,” said Transportation Director Chris Warner. “Thank you to TriMet, ODOT, Multnomah County, Metro and Prosper Portland for their financial support in helping us to reach this milestone.”

This highly anticipated Fixing Our Streets-funded project will repave twenty-two blocks of SW 4th Avenue from SW Lincoln Street near Portland State University to West Burnside. A left-running protected bikeway and safer pedestrian crossings will be installed. A new concrete bus and turn lane will decrease delays for riders on TriMet lines 9, 12, 17, 19, 43, and 44 and an accompanying floating transit island will allow buses to stop in the transit lane. Corner ramps will be made ADA-compliant and street lighting will be improved. The new northbound protected bike facility will pair with the SW Broadway Bike Improvements to create continuous north / south cycling connections through the heart of Portland’s downtown. The project will result in on-street parking and loading zone changes. Construction on SW 4th Avenue is scheduled to begin in the summer of 2022 and last approximately 12 months. Watch a fly-through explainer video about the project at https://youtu.be/t6ezSnPTQCI.

This project supports TriMet's line 15 route change, which will move the eastbound bus from SW Salmon Street to SW Alder Street to reduce travel time and simplify the route. Improvements on SW Alder Street will feature in-lane bus stops and transit priority improvements. The project will result in on-street parking and loading zone changes. This project is scheduled to begin construction this spring and be complete by May 2022.

This project will improve transit and upgrade bike lanes on SW Jefferson Street between SW 14th and 18th avenues (Collins Circle), decreasing delays for riders on TriMet lines 6, 45, 55, 58, and 68.  The project will result in on-street parking and loading zone changes. Construction on SW Jefferson is scheduled to begin in spring 2022 and will last approximately two months.

This project will improve bicycling along this important north-south corridor. Improvements include protected bike lanes between SW Oak and Clay streets, signal improvements, and parking changes to better serve passenger and food pick-up and drop-off.  Construction on SW Broadway is scheduled to begin in summer 2022 and will last approximately four months.

This project will improve speed and reliability for eastbound transit riders along W Burnside from 8th to 3rd avenues. The new bus lane will benefit the thousands of Portlanders who travel on TriMet lines 12, 19, and 20. As part of the changes to West Burnside, two eastbound general-purpose lanes will be maintained, while left turns from Burnside to 4th Avenue will be prohibited.  Construction on W Burnside is scheduled to begin in summer 2022 and will last approximately one month.

This project will improve speed and reliability for westbound bus riders on TriMet lines 12, 19, and 20 by creating a new Bus and Turn lane along NE Couch Street from NE 12th Avenue to NE 7th Avenue. The project will upgrade traffic signal timing to better manage traffic flow westbound and will also provide a bike connection along NE 7th Avenue between SE Washington Street and the Blumenauer Bridge.  Construction on NE Couch is scheduled to begin in summer 2022 and will last approximately two months.

This project will improve speed and reliability for eastbound transit riders along E Burnside from MLK to 12th Avenue through the conversion of one of E Burnside’s general-purpose lanes to a bus and turn lane. The new bus lane will benefit the thousands of Portlanders who travel on TriMet lines 12, 19, and 20. A new traffic signal will also be installed at E Burnside and MLK to improve safety. Construction is scheduled to begin in the summer of 2022 and last approximately 12 months.

This project will improve freight access and circulation and reduce multimodal conflicts in the Central Eastside through the installation of a series of new traffic signals (see map). Benefits of the new signals range from improving freight access to I-84 via a new traffic signal at NE Irving and 16th to creating a safer connections for pedestrians and cyclists through the Central Eastside to the Esplanade via new crossings of Martin Luther King Jr. Blvd. and Grand Avenue at Salmon Street. At each location, ADA accessible curb ramps will be installed alongside high visibility pedestrian crossings and bicycle connections to existing bike routes. Construction is scheduled to begin in the summer of 2022 and last approximately 12 months.

This project will improve transit speed and reliability on the Hawthorne Viaduct on the east end of the Hawthorne Bridge, extending the eastbound bus-only lane along the viaduct in partnership with Multnomah County. This work is part of a larger effort to improve transit speed and reliability along SE Hawthorne, with the section of SE Hawthorne between Grand and 12th avenues completed this past summer and a new BAT lane added at SE Hawthorne Boulevard and Cesar Chavez this past fall. Construction is scheduled to begin in spring 2022 and will last approximately one month.

Construction is almost complete on Better Naito Forever, Portland’s a premier bikeway and new accessible sidewalk along Waterfront Park. The project is upgrading traffic signals to help traffic flow for people driving while creating a safe, accessible space for people to visit Waterfront Park events such as Cinco de Mayo and the Portland Rose Festival’s CityFair. Weather-permitting, the project will be substantially complete by the end of the month. Crews will return in the spring to plant additional trees, install planters, and install permanent striping.

How to get involved

Interested in learning more about Central City in Motion project design and engagement? These projects have been informed by our Central City in Motion Working Group, a volunteer public advisory group. Anyone can join our public meetings or consider applying to become a member. Recruitments for open seats will begin later this month, sign up to our mailing list to learn more.

What to expect during construction

If you live or work near one of these projects or regularly travel on these corridors, sign up to receive the construction updates on the project pages above. PBOT greatly appreciates the patience and understanding of nearby residents and businesses during construction. Learn what you can expect in our work zones and how you can help everyone stay safe by watching this video: https://youtu.be/lx3RkJjkjSE

Learn more about Central City in Motion at https://www.portland.gov/transportation/pbot-projects/ccim.

Learn more about the Rose Lane Project at https://www.portland.gov/transportation/rose-lanes.