"Struck" safety campaign returns to the airwaves on Monday

(July 3, 2019) – As the Fourth of July holiday weekend approaches, the Portland Bureau of Transportation (PBOT) reminds the public to prioritize safety and minimize risk-taking behavior to prevent traffic deaths.

There are a variety of factors which contribute to deadly collisions on Portland streets. Most deadly crashes occur as a result of speeding, driving impaired, or other dangerous behaviors on wide, fast streets.

Driving under the influence: In Portland, 56 percent of traffic deaths involve impairment. In the United States, there were 10,874 deaths tied to alcohol-impaired driving, comprising roughly 30 percent of total traffic fatalities in 2017.

Distracted driving: The use of phones while driving takes eyes and attention off the road, which increases the likelihood of injuring others. Oregon has strict laws against using an electronic device while driving and strict enforcement along with it. In Oregon in 2018 alone, 13,086 drivers were cited for mobile phone use.

Seatbelt use: At least five people who died in Portland crashes this year were not wearing seatbelts. Nationwide, 47 percent of vehicle occupants killed in 2017 were not using seatbelts.

Each of these risk factors are easily eliminated by being aware and making the conscious decision to travel safe. Make plans ahead of time for how you are going to get home this holiday weekend, especially if you plan on drinking alcohol.

PBOT is also committed to building safety improvements that can reduce the instances of traffic crashes and reduce the severity of crashes when they do occur. View a map of safety improvements planned to be built in 2019. Read more about lessons learned during Portland's first two years as a Vision Zero city, or download our two-year report presented in June to City Council. 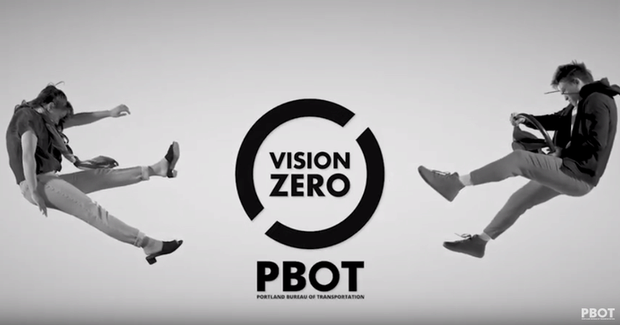 Look for 'Struck' in Spanish on Univision, KUNP TV in the Portland area

The importance of slowing down while driving is highlighted in the Struck public service announcement, which PBOT unveiled last year. The 30-second video puts the emphasis on how high-speed traffic collisions affect the lives of both the victim and the driver, whose lives are irreparably changed by a deadly crash. The video depicts a car crash without the car, illustrating the direct impact on the two people involved.

It will air on four television stations: KGW, KOIN, KPTV, and Univision. This is the first year that the Struck ad campaign will be running in Spanish on Univision TV. Struck will also appear on dozens of billboards, starting the week of July 22, concentrated in East Portland, where 28 of Portland’s 30 high crash intersections are located.

Portland is committed to ending traffic violence in our communities. Through the Vision Zero program, the City of Portland and our partners are working to eliminate deaths and serious injuries on our streets.