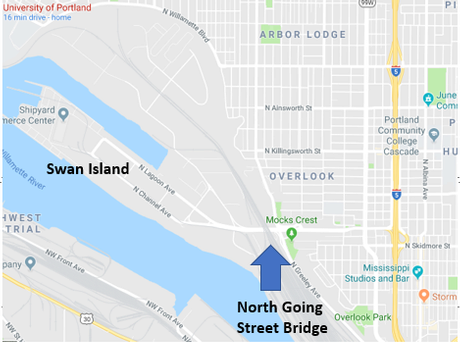 (Oct. 14, 2019) The Portland Bureau of Transportation (PBOT) continues to work on short-term and long-term fixes to restore access for travel on the North Going Street Bridge, which provides access to the Swan Island industrial area.

The Portland City Council gave emergency approval on Sept. 25 for a contract of up to $1 million with Cascade Bridge LLC to provide bridge stabilization and repair work, including permanent repairs.

City Council members and the public have been asking about who would pay to repair the City's bridge, from the damage caused by the Union Pacific Railroad derailment Sept. 7.

The City’s Risk Management team will seek to recover from Union Pacific all reasonable and necessary costs associated with the damage to the City’s transportation infrastructure, as well as other costs related to the incident and the resulting disruptions.

PBOT engineers and contractors are planning on how they can open a fourth lane on the bridge, which would allow two lanes on and off the island in each direction at all times. PBOT is working with Union Pacific to schedule times when the railroad can be shut down to allow access for bridge repairs.

PBOT has submitted a variety of work plans and schedules that could complete the work. PBOT's contractor has agreed to work at night to expedite opening a fourth lane, and while we are hoping to have the lane open as soon as possible, it could take several months because of limited access to the work zone beneath the bridge.

PBOT has also submitted a work plan that could open a fourth lane in a matter of weeks. Union Pacific is reviewing that plan.

People who work on Swan Island say that traffic congestion leaving the island continues to be a significant disruption. In the days after the Sept. 7 derailment, crews adjusted traffic signals. Last week, PBOT traffic engineers also adjusted the traffic signal at the intersection of N Going Street and N Port Center Way, the last signal travelers reach before they enter the bridge. The adjustments increased the "green time" for eastbound traffic by more than 30 percent, giving more time for eastbound travelers.

After the adjustment, PBOT staff measured the time it takes to travel from where the N Anchor Street ramp enters N Channel Avenue, to the point where N Channel Avenue passes under the N Greeley Avenue Bridge. At 11 a.m., without traffic congestion, the average travel time was 1 minute and 7 seconds.

PBOT engineers will continue to look for ways to reduce traffic delays during the lane closures.

Permanent repairs, which would open six total lanes, could potentially be completed this spring.

Initial repairs by PBOT crews made the bridge safe enough that the bureau was able to open a third travel lane on Sunday Sept. 15, allowing two lanes for westbound travel to Swan Island, with one lane available for eastbound travel. People who work on Swan Island say that traffic congestion leaving the island continues to be a significant disruption.

PBOT traffic engineers studied the feasibility of reversing the direction of one of the two westbound travel lanes, to offer two lanes eastbound direction, coming off the island, in the afternoon and evening. That option was determined to be unsafe. To use a concrete barrier to separate traffic would require obtaining specialized machinery that is not available in the region. Using cones and other plastic materials would pose safety risks as those materials could be displaced or blown over by traffic, blocking travel lanes. Moving plastic materials twice a day also exposes city crews or contractors to safety risks during the most hazardous time of a road closure: the time when they make adjustments to the equipment at the scene.

We will continue to provide updates as more information becomes available.