Information
Whether it’s paving our streets, filling potholes, improving street lighting, building sidewalks or helping our youngest Portlanders safely walk, bike and roll to school, the Fixing Our Streets program helps Portland move forward while improving our transportation system for all.
On this page 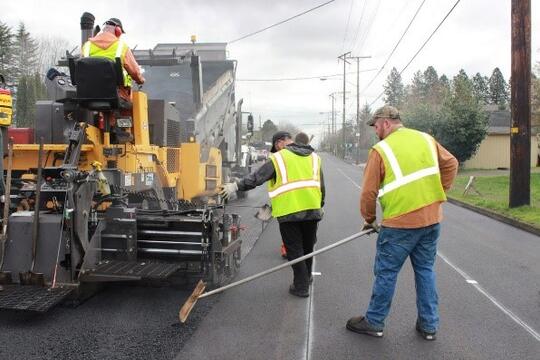 What is it? Depending on the state of the road, paving treatments can range from surface seal coats, to a grind and repave, to a base layer repair, or to a complete rebuild. Fixing Our Streets (2020-2024) paving dollars are focused on preventive maintenance, including repaving streets and applying protective street coating.

How does it make a difference? 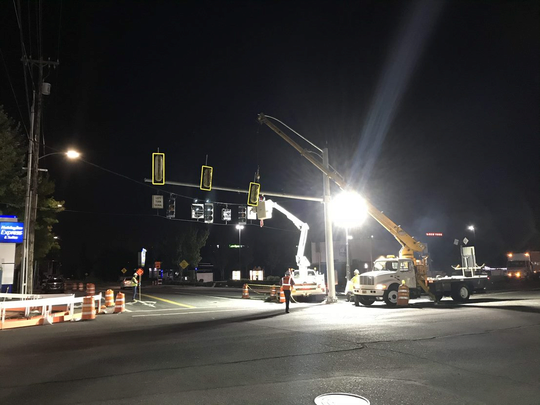 Traffic signals and crossing beacons are a vital way of increasing safety and preventing crashes. PBOT evaluates intersections to decide what engineering can make street crossings safer for everyone.

What is it? Traffic signals and crossing beacons are a vital way of increasing safety and preventing crashes. PBOT evaluates intersections to decide what engineering can make street crossings safer for everyone.

How does it make a difference? On our widest and busiest streets, people need a signal to safely cross the road. Rapid flashing beacons and traffic signals reduce pedestrian crashes by about 45%.

Safer Streets: Sidewalks and Other Walkways 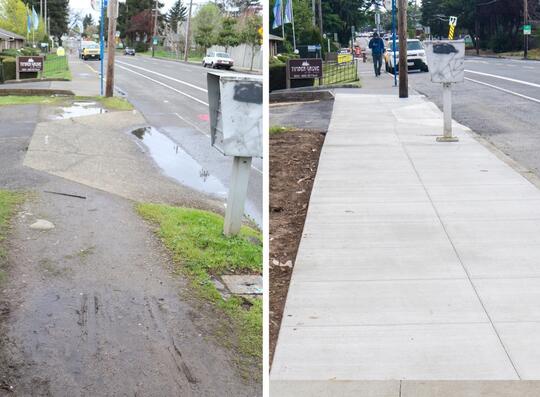 Sidewalks and other walkways separate people from traffic lanes, providing safety, mobility, and access to active travel options. They allow people of all abilities to reach businesses, transit, schools, and other daily destinations.

What is it? Sidewalks and other walkways separate people from traffic lanes, providing safety, mobility, and access to active travel options. They allow people of all abilities to reach businesses, transit, schools, and other daily destinations.

How does it make a difference? Creating a separated space for people of all ages to safely walk or use their mobility device to travel is critical for a safe and accessible transportation system.

Sidewalks and Other Walkways

TOTAL Sidewalks and Other Walkways: $4.5 million

What is it? Safe Routes to School is a partnership between the city, schools, neighborhoods, community organizations, and agencies that makes walking, biking, and rolling fun, easy, and safe for all students and families. PBOT's Safe Routes to School program connects with every elementary, K-8, and middle school in Portland to offer education on safe, active ways of getting to school, and to identify and implement needed safety improvements around schools.

How does it make a difference?

Through a comprehensive approach, PBOT’s Safe Routes to School program has increased the percentage of students walking and biking to school by 35% since it began in 2006. Improvements in this category of funding will include school crossing improvements, paths and missing connections to school grounds, infilling sidewalk gaps on priority residential streets, and tying in our existing network of bike routes to schools. Our goal: By 2035, 75% of all elementary school students in Portland will travel to school by foot or bike.

Projects will be drawn from the Safe Routes to School plan developed in 2017 with funding from the original Fixing Our Streets program. 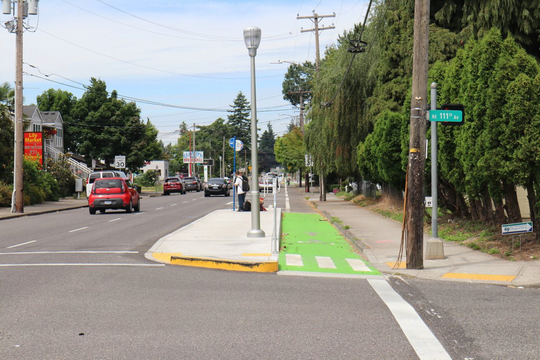 What is it? Portland’s High Crash Network makes up 8% of Portland’s streets and is where 57% of serious injuries crashes and fatalities occur. Using a data-driven Vision Zero approach, PBOT has identified street lighting as a critical improvement to make these streets safer. Recent analysis indicates a number of our High Crash Network streets in some of our most diverse neighborhoods lack adequate street lighting. In addition, public engagement work by PBOT has found that people of color feel less safe walking on poorly lit streets.

How does it make a difference?  No matter how you travel, better lighting improves visibility for everyone and can significantly reduce fatalities and injuries. Neighborhood Greenways use existing residential streets and make them places where people of all ages and abilities feel safe traveling without a car. They often run parallel to busier streets, proving a quiet place for people to bike, walk, roll and stroll.

What is it? Neighborhood Greenways are a network of residential streets that connect schools and parks, while providing access to business and transit. They feature 20 mph speed limits, painted bike markings, traffic calming features, and safer crossings of busy streets.

How does it make a difference? Neighborhood Greenways use existing residential streets and make them places where people of all ages and abilities feel safe traveling without a car. They form the backbone of the city’s Safe Routes to School network and often run parallel to busier streets, proving a quiet place for families to bike, walk, roll and stroll.

What is it? As part of PBOT’s outreach and engagement for their “In Motion” plans, neighbors and businesses told us about the safety projects they consider most important. Many of these are small-scale, simple fixes, or alternate designs focused on pedestrians and people biking.

How does it make a difference?  PBOT’s “In Motion” plans create new ways for people to travel safely in their neighborhoods by making new connections where none existed before. These improvements make it safer for pedestrians and people biking to access local schools, parks, main streets, and other community destinations without a car.

What is it?  PBOT has heard again and again from neighborhoods and businesses who want us to be more responsive to routine maintenance requests like fixing potholes, repairing sections of failing road (base repair), or maintaining gravel streets.

How does it make a difference? A quicker response to potholes and failing roads makes everyone safer. By establishing a dedicated citywide program for this routine maintenance, PBOT can deliver these services more efficiently.

What is it? As our population grows and our streets become busier, we need to be more responsive to basic safety concerns citywide. Meeting our goal of eliminating fatalities and reducing serious injuries requires projects big and small. This includes creating safer intersections, reducing vehicle speeds on cut-through routes, retrofitting our existing Neighborhood Greenways, and making additional safety enhancements to existing projects.

How does it make a difference? A pedestrian hit by a person driving at 30 mph is 75% more likely to suffer serious injuries or death relative to a pedestrian hit at 20 mph. PBOT has several proven tools to significantly improve street safety. Establishing a citywide program for basic street safety services allows PBOT to deliver these services more efficiently. To make intersections safer, for example, PBOT can remove parking as well as improve everything from signage to striping to signal timing. Strategic placement of speed bumps is also a low-cost and effective treatment for reducing speed.