Community Event
You're invited to a community celebration of Portland's newest car-free bridge! Join us for pop-up block parties on nearby streets, design tours, pedestrian and bike parades, and meet local vendors and community organizations all gathering to celebrate the bridge's opening day. 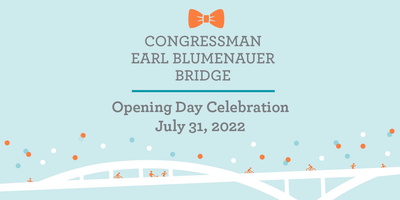 The Portland Bureau of Transportation’s (PBOT) Congressman Earl Blumenauer Bicycle and Pedestrian Bridge will provide a critical car-free connection between two of the Rose City’s fastest growing neighborhoods, the Lloyd and the Central Eastside.

In the spirit of how this bridge will bring us together, PBOT will host a family-friendly community gathering to celebrate the formal opening of the new crossing.

Due to forecast extreme heat, the Community Celebration in the north and south plazas has been re-scheduled to start and end one hour earlier. Vendors and tabling will be 10 a.m. to 2 p.m., rather than 11 a.m. to 3 p.m. Times for the musical performance at 11:30 a.m. and Opening Ceremony at noon have not changed.

10 a.m. - 3 p.m. Milagro Theater and The Street Trust welcome you to Milagro Plaza

Arrive to the ceremony in style! Join Milagro Theatre and The Street Trust for a south-side biking/walking/rolling parade. Join us beginning at 10 a.m. for bike decorating, bow-tie crafting, refreshments, and music before the half-mile parade to the Opening Ceremony! After the festivities on and around the new Blumenauer Bridge, return to Milagro anytime between 1 p.m. to 3 p.m. for more music, snacks, and to see artists at work. Milagro is the premier Latino arts and culture center of the Pacific Northwest and has provided extraordinary Latino theatre, culture, and arts education for the enrichment of all communities since 1985.

Join us for a celebration of the Lloyd neighborhood in Hassalo Plaza, a car-free public space. Arrive at 10:30 a.m. to participate in the bike and pedestrian parade to the Opening Ceremony at the Blumenauer Bridge. Prior to the parade, we will decorate our helmets and make flags while enjoying coffee and snacks. After the parade, we will keep the community celebration going. Enjoy music from a live jazz band, a chalk drawing contest, or get a free bike tune-up or repair. All are welcome!

11:30 a.m. Get excited with a musical performance by Karma Rivera

With her clever, edgy lyricism and riotous stage persona, Karma Rivera has risen to star status in the Portland music scene. The emerging rapper and Hype queen explores the strength and value behind words with meaning and she does this with an unrivaled individualist style.

Starts at 1 p.m. in the North Plaza, ends at the South Plaza

During this tour of the bridge, members of the design team will be on hand to answer questions and explain why the bridge takes its particular form: how it was shaped by specific engineering requirements, how it was constructed within its tight urban setting, and how the plazas are designed to knit the bridge elegantly into the neighborhoods on both ends.

Join us for an 8-mile bike ride highlighting the bikeway system in the central city, following parts of the future Green Loop. We’ll cross bike-only bridges, use bike-friendly streets, lanes, and paths, and see some of the ways we make bike routes more comfortable in a dense urban environment.

After the bridge opening, come celebrate with Depave a few blocks away as we reimagine our urban landscape through re-greening and community placemaking. This block party will demonstrate the potential of a "green street" project in the Central Eastside, one that amplifies greenspace by depaving and rethinking intersection safety. In coordination with Friends of the Green Loop, the project site offers the opportunity to create a "green node" along that future bike route. We'll have food trucks, lawn games, artisan vendors, skate features, a live planting event with Friends of Trees, and an opportunity for public input about the Depave project. We'll have live music with sound provided by Friends of Noise and eight different bands playing throughout the day!