Information
When installed as part of a toolkit of street design elements, medians can improve safety and support nearby businesses.

When installed as part of a toolkit of street design elements, medians can improve safety and support nearby businesses. Portland crash data indicate that multilane streets with medians experience crash rates that are 40 percent lower relative to similar streets lacking medians.* National data mirror these local safety benefits, and also indicate that businesses do as well or better following median installation.

A median is a barrier between opposing lanes of auto traffic (see illustration above). Gaps in the median allow people to drive onto and off of a street and to make U-turns. Street designers refer to medians as "access management," which also includes driveway design and placement. 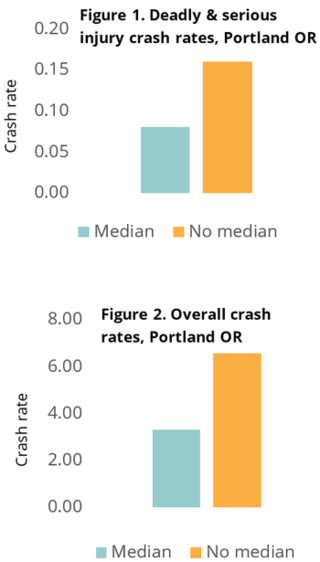 Portland’s experience with medians is backed by national findings. The Federal Highway Administration notes that medians may reduce crashes involving people walking by 46 percent and those involving people driving by 39 percent.

The FHWA explains the crash reduction effect of medians by pointing to the following impacts:

In addition to enhancing safety, medians can make streets more attractive by providing a place to plant trees or other vegetation. While visibility can be a concern when adding vegetation, a Washington Department of Transportation study of 13 major urban arterials found that the presence of small trees in medians had no significant effect on crash rates.

Studies have found that medians generally have neutral to positive economic effects on local businesses (see Table 1). Based on before-and-after studies of medians from across the country, the Federal Highway Administration has found the following effects:

An Oregon Department of Transportation report summarized a number of studies examining the economic impact of medians. Among the findings:

Research indicates that the economic effects of medians vary but are largely positive. For example, one study found that gas stations and auto-repair shops experienced slight declines in gross sales, but concluded that “in almost all cases, employment increased in businesses surveyed” following installation of a raised median (Frawley, W.E. and W.L. Eisele (2000).