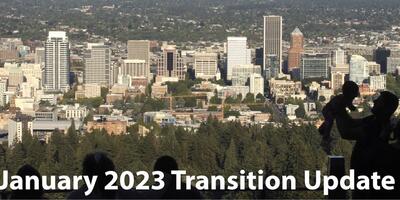 The transition to a new election system and form of government is underway. Keep reading for updates about the changes approved by voters last November!

Apply by Jan 31 to serve on the Salary Commission

If you’re a Portland resident who is a human resources professional with compensation experience, please apply to serve on the City’s first-ever salary commission. The commission has the authority to determine the compensation of all City elected officials, which directly impacts who can run and serve in elected office.

The initial salary commission will be nominated by the mayor and confirmed by City Council by March 15. The group is required to complete their work by Aug. 1, 2023, with salaries taking effect Jan. 1,  2025.

Please note that this is the same body that was previously referred to as the Charter Transition Advisory Committee. Although the name has changed, the scope of work remains the same.

The Government Transition Advisory Committee will be comprised of 15 community members appointed by Mayor Wheeler and approved by the Portland City Council. Community members who live, work, play, go to school and/or worship in Portland are eligible to serve. After being appointed to two-year terms in March 2023, members are expected to spend about 12-15 hours per month on Advisory Committee work.

On Jan. 25, the Portland City Council is expected to appoint 13 community members to the Independent District Commission – the group that will establish four geographic districts to elect future city councilors.

People nominated to serve on the commission bring deep expertise in election systems, local government, community involvement and equity. They were selected by Mayor Wheeler from 279 applications.

Independent District Commission members will begin meeting in February. One of their first tasks will be to establish district plan criteria. The district map must be approved by Sept. 1.

Apply by Jan. 23 to serve as a coordinator supporting the City Transition Team.

Get the latest updates at Portland.gov/Transition or contact the team at Transition@PortlandOregon.gov.

Every title of Portland city code will need to be reviewed and updated to match the new city charter. A project team has begun prioritizing the code titles. Highest priority has been given to Title 2: Legislation and Elections, Chapter 3.02: Council Organization and Procedures, and Title 15: Emergency Code to ensure that the project meets timelines for the November 2024 election.

In Portland’s current form of government, the mayor and city commissioners directly oversee the two dozen bureaus and offices that provide city services – from Police to Transportation to Development Services. Mayor Wheeler redistributed those responsibilities this month, grouping bureaus by service areas to support the transition to a mayor-council form of government with a city administrator.