Pride Month should last all year

June 2020 has come to an end. While Pride is usually celebrated throughout the whole month,  our Lesbian, Gay, Bisexual, Transgender and Queer (LGBTQ+) communities are too fabulous to only be honored just thirty days of the year. Keep learning and be inspired year-round with information and resources organized by this acrostic poem. 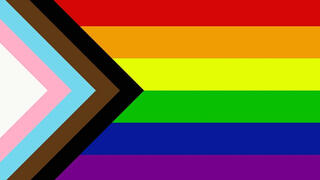 The original gay pride flag, designed by Gilbert Baker, first flew at the San Francisco Gay Freedom Day Parade celebration in 1978. See how the pride flag has changed over time, and what designs and colors represent different parts of the queer community in this guide written by Ariel Sobel.

Last year marked the 50th anniversary of the Stonewall uprising in New York. And earlier this month marked the 50th anniversary of the first organized Pride march, the Christopher Street Liberation Day Parade, to honor what happened at Stonewall and what the LGBTQ+ movement was–and still is–fighting for: equal rights, justice, and freedom to live openly and free from harm.

Portland Pride turned 40 in 2015. A June 2015 issue of Portland Monthly looked back on four decades of local courage, progress, and good times.

The Gay & Lesbian Archives of the Pacific Northwest (GLAPN) curates a list of regional heroes every June as part of their Pride month celebrations. Each year since 2012, members of the queer community and their straight allies are recognized for contributions to the LGBTQ+ community. Find out who from our local communities is taking a stand for transgender issues, civil rights protections, or founded one of the oldest LGBTQ+ -identified theaters in the United States.

The LGBTQ+ community is beautifully diverse, and expands far beyond any acronyms. LGBTQ+, while often used as an umbrella term, can be under-representative of people identifying outside of those labels.

In an effort to become more inclusive, what started with the four letters LGBT has expanded to LGBTQ2IA+ (also 2S LQBTQIA+ to lead with two spirit), and continues to transform and grow along with their communities.

Here are the ABCs of what each letter has come to represent (note that these may not be all-encompassing!):

A: Asexual (an additional A can also be included for Allies)

+: Intended to be representative of the larger community; Agender, Genderqueer, Pansexual, fluid, and beyond

We would also be remiss not to mention that the LGBTQ+ rights movement ignited at the 1969 Stonewall Riots with the help of two self-identified drag queens of color, Marsha P. Johnson and Sylvia Rivera. Pride celebrations wouldn’t be what they are today without their activism.

Learn more about Pride and its history with some of these opportunities for reading and watching:

Crisis Text Line. Text LGBTQ or HOME to 741741 to connect with a Crisis Counselor

Local organizations for volunteering or support:

https://en.wikipedia.org/wiki/Rainbow_flag_(LGBT)
And thanks to Stacy Brewster for excerpts from our PBOT employee newsletter!