Where - Safe Rest Villages and other ARPA-funded Alternative Shelters 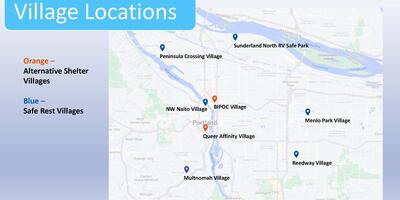 This page was created Wednesday, 11.10.21 from information formerly on the project homepage. It has been updated several times, most recently on 9.1.22.

Thanks to a federal grant to the City of Portland from the American Rescue Plan Act (ARPA), the City's Safe Rest Village team is adding to the mix of alternative shelters throughout Portland.  These are just some of the many shelters, each with different models, funding sources, and services, that collectively provide for those in need.  This County Joint Office of Homeless Services map shares the location and some information on the broader system of alternative shelters.

Safe Rest Villages are intentionally geographically spread around the city, to bring the services and stability they offer to people, where they are. Meeting people where they are - both geographically as well as emotionally - is a critical element for the success of the villages. There are many models for providing shelters - the Villages take the approach that low barriers to entry (18 or older and houseless), with on-site services, support, and amenities are a model that will help address the first step from streets to stability.

Below is a map of the locations for Safe Rest Villages.  For more information on each site, click on the headline above each map below. 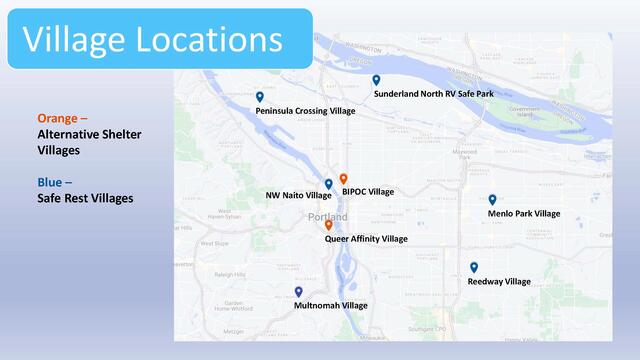 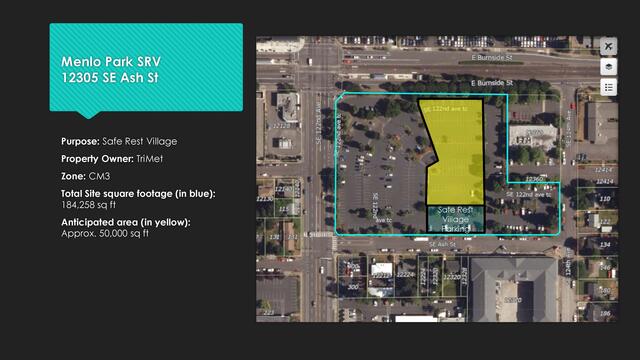 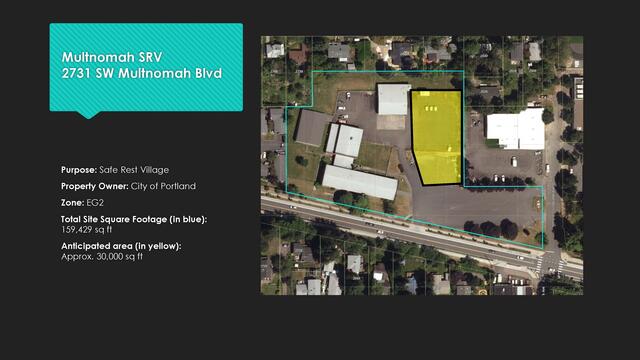 This site will be Portland's first RV Safe Park Village. 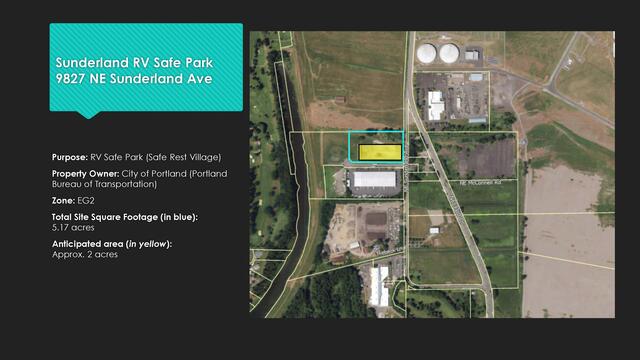 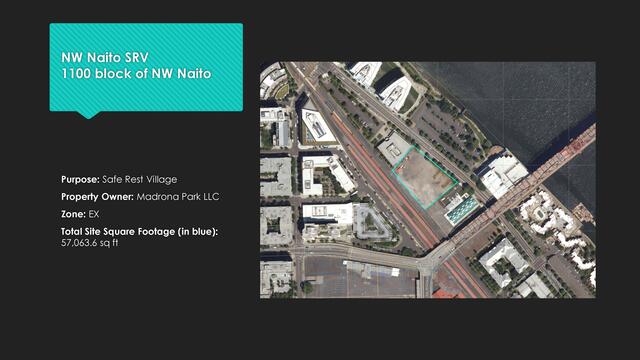 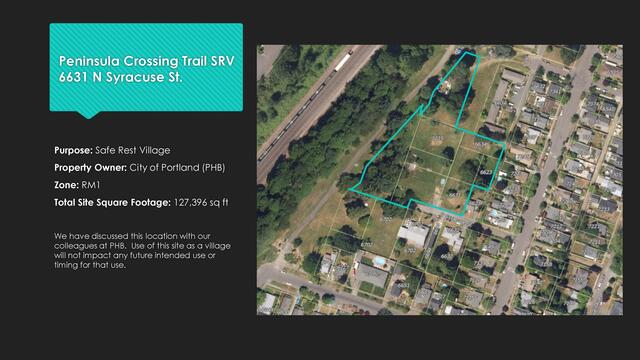 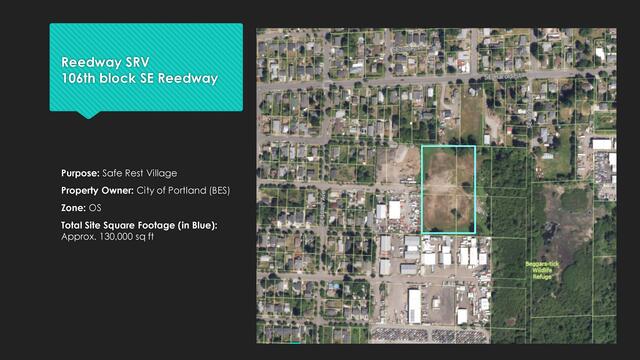 In the early days of the pandemic the City, in collaboration with community organizations and the Joint Office of Homeless Services, set up three emergency outdoor physical distancing shelters. Two of the three shelters provided space and support for culturally specific groups. One, the Queer Affinity Village was created to build a welcoming atmosphere for LGBTQIA+ self-identified neighbors.  Another, the BIPOC Village (Black, Indigenous, and People of Color) was founded to create an atmosphere meeting the needs of People of Color.  The third was Old Town Village, which was not culturally specific and has since closed.

As of July 2022 (the start of the City's fiscal year), BIPOC Village and Queer Affinity Village are funded by the City of Portland’s American Rescue Plan Act (ARPA) allocation. These two alternative shelters have a slightly different program model than the Safe Rest Villages but share the same goal of providing services and stability to people experiencing unsheltered houselessness to help them move to their next step – housing.

As with the other ARPA-funded sites, the physical infrastructure is managed by the City of Portland (through the SRV team) and the programming is managed by the County's Joint Office of Homeless Services. The JOHS contracts with All Good Northwest to manage BIPOC Village and Queer Affinity Village.

This alternative shelter welcomes those who identify with the Black, Indigenous, and People of Color (BIPOC) community. The village moved to this Lloyd District location in the summer of 2021. 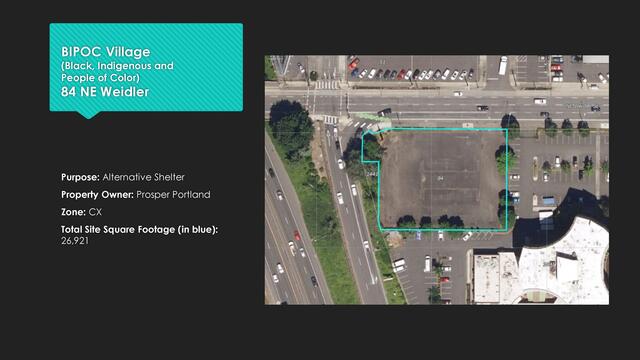 This alternative shelter set up specifically to support those identifying with the LGBTQIA+ community moved from its past location to SW Naito in May 2022.  Knows as QA Village, this site features shade and tree cover, and a much less visible location than its previous site under the Hawthorne Bridge. 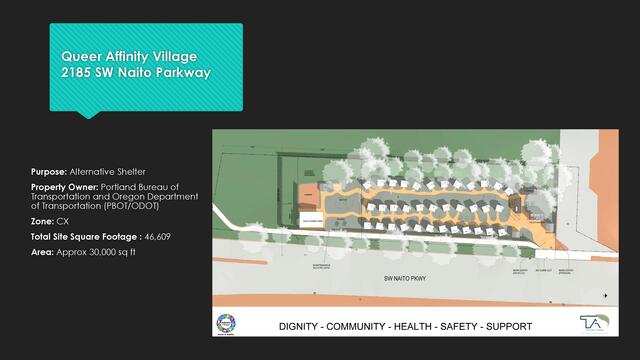 How do Safe Rest Villages fit into the shelter system around town?

Multnomah County manages a range of shelter options for those experiencing houselessness. They will be responsible for managing the Safe Rest Villages (through a contracted non-profit partner) once the sites are finalized. The City’s role – as it relates to these efforts, is identifying locations, developing the sites, and then ongoing management of the physical assets.

In 2015, before the Houselessness Emergency was declared, there were many fewer shelters than today, and all but one were focused in the downtown area. As the emergency has continued – worsened – the County has opened and/or supported a number of shelters of many varieties (for families, for singles, indoor, outdoor, etc.)  more broadly across the city.  These are now more geographically spread to support people where they are, and vary in the services they offer, program models, and who they serve.

Where are other outdoor shelters?

The Joint Office of Homeless Services funds a variety of alternative shelters, and keeps an interactive live map of shelters that they support in some way.  There are others as well.

Also, see the SRV Program Background page for a list and links to some existing outdoor shelters in the Portland area.