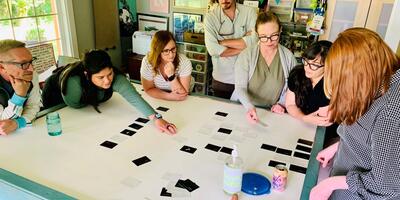 Kellie serves as Chief of Staff. She supports Commissioner Ryan’s leadership vision and sets the stage for strategic and productive work in his office. She has more than twelve years of experience as a development professional—raising millions of dollars for city government and non-profits while managing complex relationships and expectations. Kellie is an Indigenous Mexican woman focused on representation and equity in practice. She served as the Development Manager for Portland Parks & Recreation for over ten years, working closely with Commissioner Nick Fish. She also worked five years as Vice President of Strategic Planning for the education non-profit, All Hands Raised—led by Dan Ryan.  Kellie received a Bachelor’s degree in Liberal Arts from Portland State University.

Kellie is a self-proclaimed introvert and homebody—but will jump at any chance to adventure on Mexican beaches and desert landscapes.

Darion is driven by a passion and dedication to social justice. A commitment to leveling the field of opportunity so that all Oregonians can reach their full potential is what fuels him.

A tenured Oregonian, Darion believes having a strong network and support system to be essential to thrive in society today. Through his work, he feels empowered to give back to the communities that have supported him along the way.

Prior to joining Commissioner Ryan’s team, Darion served for nearly six years on the communications team at Meyer Memorial Trust—one of the largest private philanthropies in Oregon that commits its position, resources, and energies to dismantling barriers to equity and improving community conditions. Before Meyer, Darion worked on the communications team at Basic Rights Oregon. Following his passions for advocacy, social and racial justice, he has built community and fostered lasting change throughout Oregon and the Pacific Northwest.

A former board chair for Q Center Portland and Sankofa Collective Northwest (formerly PFLAG Portland Black Chapter), Darion currently serves as a board member of the University of Oregon’s Pride board, President of City Club of Portland’s Board of Directors, and host and creator of QTPOCTalk, a podcast focusing on the intersections of race, identity, and gender. Darion is also a senior fellow of the American Leadership Forum of Oregon Class of XL.

Karen Guillén-Chapman serves as Senior Policy Advisor to Commissioner Ryan and is the liaison to the Bureau of Development Services and the Portland Housing Bureau. She has worked for the City of Portland since 2014. Most recently she held the position of Coordination Section Chief with the City’s Emergency Coordination Center during the City’s COVID-19 emergency response and was also a member of the Equity & Policy Development team at the Bureau of Development Services. Karen is passionate about community development, urban design & livability, placemaking, and the built environment.

Karen is a native Tica, hailing from the pura vida lands of Costa Rica. She has been a resident of N/NE Portland since 2005 and is also an alumna of PSU where she received both her bachelor’s and master’s degrees in business administration and urban and regional planning respectively. Some of her favorite places locally are public plazas and libraries around town.

T.J. has extensive knowledge of communications, strategic planning, marketing, and brand building. With more than 20 years of experience as a global director, T.J. has worked internationally while living across North America, The Netherlands, and Russia, for large brands, including Nike, Target, Macy’s, and Sportmaster. Since returning home to Portland from abroad, he shifted his focus toward making a change in the community.