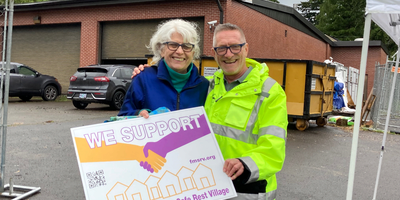 Referrals: Referrals are made directly by specific outreach workers only. We cannot accept self-referral or third-party referral requests at this time.

The ADA was followed where required, yet we understand that different disabilities have different needs. Not all amenities will meet all people’s needs.  This list is intended to define what features are accessible (and how much so) so that people can understand if this site will suit their needs.

Friends Group: A new group, the Friends of Multnomah SRV, has formed to channel support, volunteer efforts, and donations to the new village.

In the Multnomah neighborhood of SW Portland, a portion of the parking lot at the former Sears Army Reserve Center will be one of the Safe Rest Village locations.

The Safe Rest Village team has been working with community members - representatives from the Multnomah Neighborhood Association (MNA), and the West Hills Christian School, among other stakeholders, to address questions and concerns and to develop a Good Neighbor Agreement (GNA). The GNA will serve to define roles, contact information for representatives of various partners, and establish a process for addressing concerns when they arise.

With the opening of the village, there is now contact information available for community members to reach out directly to the shelter operators.  As listed above, the 24/7 phone line for the Multnomah SRV is: (971) 716-3203.  The Shelter Manager, Brian Linné, can be reached at his email: blinne@allgoodnw.org.

"This houselessness crisis has a powerful impact in every corner of the city. Multnomah Village cannot expect to be exempt. We want to see our neighborhood choose to be part of the solution."

Commissioner Amanda Fritz, Robin Schauffler, and Sermin Yesilada from Op-Ed in The Oregonian.

SRV Team and Commissioner meeting with Multnomah neighbors: On January 27, 2022 Commissioner Ryan and the entire Safe Rest Village team attended the Multnomah Neighborhood Association's (MNA) workgroup to answer and address community questions and concerns.  The two-hour meeting was recorded and can be seen here. (Link above provided courtesy of MNA.

In 2015, shortly after the initial Housing Emergency Declaration an emergency shelter was set up at this same location.  At the time, it was new to set up such a site on short notice (it was opened just as significant winter weather was arriving).  Neighbors who lived in Multnomah at the time remember that site, so questions about how this site would be different were raised. Below is as slide use during the presentation to the neighborhood, highlighting the differences.

What about the Land Use rules?

"The Safe Rest Village team does thorough vetting of each site before we announce one publicly. Our Team always considers and discusses the applicable zoning code and other standards for each potential site with the pertinent bureaus. At this time, we are still in the process of determining which improvements will be made on the site. Depending on the proposed improvements this may include considering the development as a temporary activity under Chapter 33.296 in the zoning code. We are still finalizing the site plan and determining the process for applying for permits for development."

FAQ for this site:

A printable FAQ sheet for this site is available. It will be updated as things evolve.

Additionally, the Multnomah Neighborhood Association asked a number of questions of the SRV team shortly after the site was announced.  Below are links to the responses - dated early March 2022.  These were the best information we had at the time, but some things may have changed since that time (for example, we now have a shelter operator).

This site will be updated as things evolve.  There is much more information on linked pages, but if you find that you have questions not addressed here, please reach out to our team at saferestvillages@portlandoregon…