On Tuesday May 24, 2016, at 7:28 p.m., North Precinct officers responded to the Fox Run Mobile Home Park, located at 9000 Northeast Martin Luther King Jr. Boulevard, on the report of a disturbance, possibly involving a male and female.

Detectives later learned that the suspect, 63-year-old Timothy James Bucher (pronounced "BOO-Shay"), was in an argument with his 62-year-old wife then called 9-1-1. Bucher went outside of his residence and confronted a pregnant female neighbor with a knife then her husband with a handgun. When North Precinct officers arrived, Bucher pointed the handgun at officers then went back inside his residence. The Special Emergency Reaction Team (SERT) and Crisis Negotiation Team (CNT) were activated.

Crisis Negotiators were able to make contact inside the suspect's home and his mother came out safely, (Bucher’s wife was already out of the residence). Bucher fired dozens of rounds from an AK-47 style rifle at police and striking neighboring residences.

Bucher came outside the residence to surrender, but was not cooperative. A SERT K-9 was deployed to assist in taking Bucher into custody. Bucher assaulted the dog and continued to struggle until another SERT officer deployed a Taser, allowing Bucher to be taken into custody. He was transported to the hospital by ambulance with a non-life-threatening injury consistent with a dog bite.

Bucher is a Registered Sex Offender on an original charge of Sodomy in the First Degree, and a convicted felon. He was indicted on June 13, 2016, and charged with 35 counts, including 10 counts of attempted aggravated murder. In February 2017, he pleaded guilty on two counts of Attempt Aggravated Murder with a Firearm and two counts of Intimidation in the Second Degree (bias crimes) and sentenced to 15 years in prison. 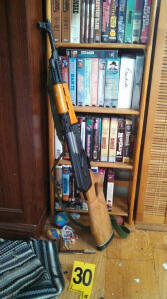