On February 9, 2017, at 7:24 a.m., East Precinct officers responded to the report of an armed robbery at the Portland Value Inn hotel, located at 1707 Northeast 82nd Avenue. As officers were responding, they learned that the victim was sitting in his car across the street from the hotel when the suspect robbed him at gunpoint. The victim told police that the suspect, later determined to be 17-year-old Quanice Derrick Hayes, put a gun to his head and held him hostage for approximately 30 minutes in the car then stole his Oregon Trail EBT card and an item of clothing. The victim described Hayes to police as a black male in his 20s, wearing a dark-colored hooded sweatshirt and jeans, armed with a handgun. The victim described the handgun to police as a large caliber handgun, desert camouflage in color. The victim told police that Hayes walked away toward 82nd Avenue after the robbery.

At 7:26 a.m., officers responded to a 9-1-1 call of a car prowler at the Banfield Pet Hospital, located at 1816 Northeast 82nd Avenue, where the victim provided a description of the suspect consistent with the first 9-1-1 call of the robbery. An article of clothing found in the victim's car was linked to the robbery victim at the Portland Value Inn.

At 7:36 a.m., officers responded to a 9-1-1 call of an unwanted person in the yard of a home in the 8300 block of Northeast Tillamook Street. The caller provided a description of the suspect consistent with the previous two 9-1-1 calls.

At 7:48 a.m., officers checking the neighborhood contacted the suspect in the unwanted call, later determined to be Hayes, in the side-yard of the residence and he told officers he lived in the home. As officers checked with the resident, Hayes ran from officers southbound behind the home so officers established a neighborhood perimeter and began to search for Hayes, assisted by a Canine Unit. Officers noticed that Hayes was holding his waistband as he ran from police.

Based on information gathered at the crime scenes, the officers believed that Hayes was the same person involved in all three incidents, including the armed robbery. Near the Tillamook address, Hayes left behind a small bag and items scattered about the ground, some of which were determined to have come from the car prowl at the Banfield Pet Hospital.

During the neighborhood search, the Canine Unit led officers to a residence in the 8300 block of Northeast Hancock Street, where they located a broken window in a door, large enough for a person to enter the home. Officers began to focus on the residence as a possible burglary location and were developing a plan to possibly search the home when they discovered an open window at the opening to an alcove between the garage and the home. At 9:21 a.m,, the officers encountered Hayes crouching deep in the alcove. Officers believed he was armed with a handgun, as reported by the robbery victim, and was involved in the car prowl and burglary.

Officers ordered Hayes to crawl out of the alcove, which he started to do, but then stopped and got upright on his knees. Hayes was ordered multiple times by officers to keep his hands up, but made repeated and deliberate motions with his hands to the area of his waistband and pockets. During this encounter, Officer Andrew Hearst, a seven-year-veteran of the Portland Police Bureau, fired three shots from his patrol rifle at Hayes, striking and killing him. After the shooting, officers approached Hayes to take him into custody and render immediate medical aid. Medical personnel arrived and determined that Hayes was deceased.

A desert tan-colored handgun was found next to Hayes on the ground. It was later determined that the handgun was a realistic-looking replica firearm.

At the time of the shooting, Hayes had in his possession the robbery victim's EBT card as well as property stolen from the home on Hancock Street.

The Oregon State Medical Examiner conducted an autopsy and determined that Hayes was shot three times -- twice in the torso and once in the head. Toxicology results on Hayes' blood showed numerous drugs including cocaine, benzodiazepine and hydrocodone. An examination of the replica firearm by the Oregon State Police Crime Lab showed Hayes' DNA on the gun.

Once the investigation was complete, it was forwarded to the Multnomah County District Attorney's Office for presentation to the grand jury. On March 21, 2017, a Multnomah County Grand Jury determined that the officer was justified in his use of deadly force shooting death of Quanice Hayes.

As part of the use of force review process, the Bureau conducted an internal review of the entire incident and the case went before the Police Review Board (PRB), which is comprised of community members, Bureau members and representatives from the Independent Police Review Division. 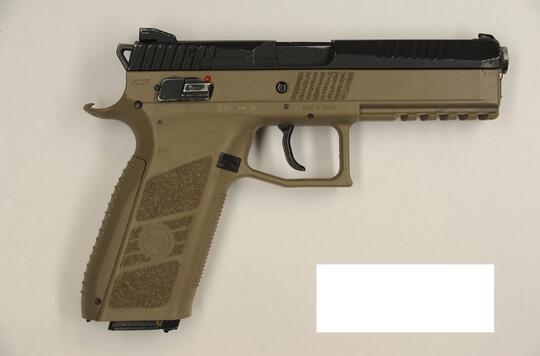