On Sunday, May 28, 2017, at approximately 6:28 a.m., East Precinct officers responded to the area of East Burnside Street and Cesar E. Chavez Boulevard on a report that a man was walking in the area and holding a handgun.  Shortly after officers arrived in the area, they encountered the man, 51-year-old Michael Ervin Grubbe.  During this encounter, shots were fired by the police and the suspect ran into the neighborhood. Officers encountered him again near NE Laurelhust Place and Couch Street, where additional shots were fired.  The suspect again ran off into the neighborhood.

After an exhaustive search of the neighborhood, the suspect was arrested near NE 3th Avenue and Sandy Blvd.  Police seized a Umarex 40 XP CO2 BB gun, with a metal slide and a 19-round magazine from Grubbe and arrested him on three outstanding misdemeanor trespassing warrants.  He was uninjured in the shooting.

In the afternoon hours of Wednesday May 31, 2017, the suspect was again taken into custody again in the area of Northeast 118th Avenue and Sandy Boulevard after a report that he was trying to force entry into his mother's home nearby. Grubbe was armed with a metal pipe and scissors, but dropped them and was taken into custody. Grubbe was placed on a Police Officer Hold and transported to a Portland hospital for a mental health evaluation.

The Portland Police Bureau's directive outlining the procedures followed after an officer-involved shooting may be found in Directive 1010.10 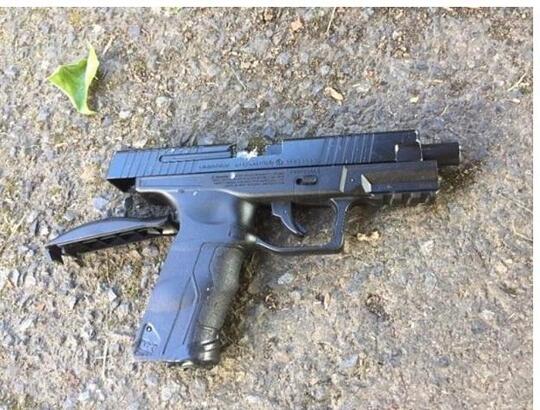