On Monday, March 26, 2012, at 7:30 a.m., Portland Police officers assigned to East Precinct located a vehicle parked on Southeast 37th Avenue, between Stark and Oak Street. The vehicle was suspected of being involved in an armed robbery the prior day.

When officers located the vehicle, they noticed an adult male apparently sleeping in the car. Officers backed away from the vehicle and maintained visual surveillance of it and asked for additional resources to respond. A sergeant called for a limited deployment of the Special Emergency Reaction Team (SERT) to respond with an armored vehicle and a custody team, which would be used to make a safe approach to the vehicle and make the arrest. Officers developed a contingency plan of conducting a high-risk vehicle stop and set up spike strips to the north of the vehicle in the event the suspect tried to speed away. The primary goal was to contain the suspect in the street and not let him out into the community creating a greater risk to the public.

As officers were awaiting the arrival of SERT, the suspect began to wake up and move around in the car. Concerned that the suspect might escape into the neighborhood, officers conducted a high-risk vehicle stop and gave commands to him.

The suspect began to get out of the vehicle armed with a handgun. Four officers fired their weapons striking the suspect. The officers then approached the suspect, secured him and the handgun, and then rendered first aid. They also called for medical personnel to respond. No officers were injured.

The suspect was identified as 31-year-old Jonah Aaron Potter. He was transported to an area hospital with multiple gunshot wounds. He was treated and lodged into the Multnomah County Detention Center.

After securing the handgun, officers determined that it was a realistic-looking replica firearm that was determined to be a pellet gun.

On April 9, 2012, a Multnomah Grand Jury found that the officers involved were justified in this shooting. 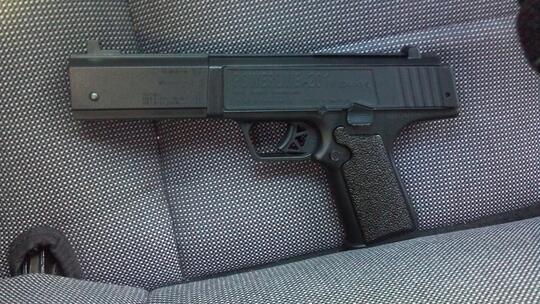