On February 9, 2017, at 6:31 p.m., Central Precinct Officers Roger Walsh and Bradley Clark, both 11-year veterans, responded to a 9-1-1 call regarding a 56-year-old man (later identified as Don Perkins) who was threatening to commit suicide. Information gathered by the Bureau of Emergency Communications (BOEC) suggested that Perkins was near the 2100 block of Southeast Lafayette Street.

Officers arrived in the area and began to search for Perkins. At approximately 7:15 p.m., BOEC obtained information of a more specific location for Perkins. Officers used the information to locate Perkins in a van in the 3300 block of Southeast 22nd Avenue.

Officers, including an Enhanced Crisis Intervention Team (ECIT) officer, contacted Perkins and began to communicate with him. During the contact with Perkins, the officers developed information that he possessed a handgun. As officers were attempting to continue communication, Perkins dropped something out of the van that officers believed was a handgun. Perkins exited the van then reached for the item which resulted in an officer firing a single shot at him. Perkins told the officers they were going to have to shoot him and he moved back toward the item, resulting in officers firing additional shots that struck Perkins. Officers made a plan to safely approach Perkins and get him medical attention. Perkins was transported by ambulance to a Portland hospital for treatment to his injuries. The item Perkins dropped was later determined to be a realistic-looking replica firearm. A second replica handgun was seized as evidence from Perkins' van.

Through the investigation, detectives learned that Perkins was under the influence of prescription narcotics and when police arrived, he attempted to force the officers to shoot and kill him as a method of suicide commonly known as "suicide by cop."

On March 15, 2017, a Multnomah County Grand Jury determined that the two officers were justified in their use of deadly force in the shooting. Perkins recovered from his injuries and received treatment at a local medical facility and was released. 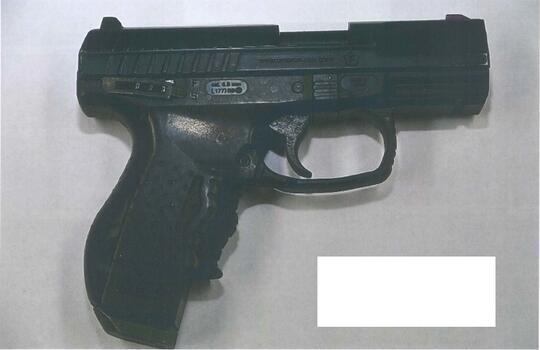