On Monday, September 1, 2014, at 9:56 a.m., North Precinct officers responded to the 122nd Avenue off-ramp from I-84 eastbound on the report of man walking along the ramp, armed with a handgun, pointing at passing cars. Additional callers reported that it appeared the man was trying to carjack drivers on the ramp.

Officer Michael Honl, a 17-year-veteran of the Portland Police Bureau assigned to East Precinct, deployed his shotgun and struck the suspect. The suspect ran off the north side of the freeway and collapsed in the 11200 block of Northeast Fremont Street. Officers began talking with the man who refused to comply with commands and indicated he wanted officers to shoot him.

The Special Emergency Reaction Team (SERT) and Crisis Negotiation Team (CNT) responded. SERT was able to safely approach the man and take him into custody and render medical aid. The suspect was transported to a Portland hospital with non-life-threatening injuries.

Detectives identified the suspect as 27-year-old Denorris Laron McClendon.  Detectives seized a black, replica semi-automatic air pistol from the crime scene that McClendon was carrying and pointing at people during this incident.

During the investigation, Detectives learned that McClendon had contact with Portland Police officers on Sunday, August 31, 2014, at approximately 8:00 p.m., the night before the incident on I-84. The police contact was the result of a call from McClendon's grandmother, who told police that McClendon was suffering from a paranoid delusions. Additionally, she told officers that McClendon had broken both arms approximately 4 days earlier and had removed both casts himself.

Officers spoke with McClendon and noted the apparent injuries to his arms and he agreed to go a Portland hospital by ambulance, where he was placed on a police hold for a mental health evaluation and medical treatment.  McClendon was released from the hospital, and Detectives learned he then ingested a quantity of methamphetamine prior to the 9-1-1 calls on I-84.

In September 2014, a Multnomah County Grand Jury returned a 21-count indictment against McClendon. McClendon pled guilty to 8 counts of Menacing, 2 counts of Reckless Endangering Another and 1 count of Disorderly Conduct in the Second Degree.

A Multnomah County Grand Jury found that the officer-involved shooting of McClendon was justified. 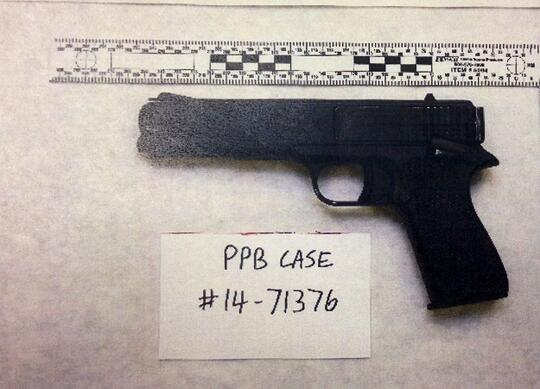