Officer Jimenez exited the patrol car and walked behind the suspect, later identified as 55-year-old David James Ellis, who was walking away westbound on Sandy Boulevard. Officer Jimenez tried to verbally engage Ellis multiple times, but Ellis did not respond. Officer Konczal drove alongside Ellis and positioned the patrol car on 110th Avenue to prevent Ellis from walking away further. At the corner of 110th and Sandy, Ellis turned toward Officer Jimenez, reached into his back pocket and retrieved a folding knife.

Officer Konczal fired a shot, striking Ellis, who then fell onto the ground and Officers Jimenez and Konczal moved away to their patrol car and held Ellis at gunpoint until cover officers arrived and were able to take him into custody and begin providing medical aid.

Officer Jimenez was transported to a Portland hospital by ambulance where he was treated and released.

Ellis was transported by ambulance to a Portland hospital for treatment to a single gunshot wound to his upper right arm. He was released on July 6, 2015, and booked into the Multnomah County Jail.

On Monday July 13, 2015, a Multnomah County Grand Jury indicted Ellis on charges of Attempted Aggravated Murder, Assault in the Second Degree and Unlawful Use of a Weapon. 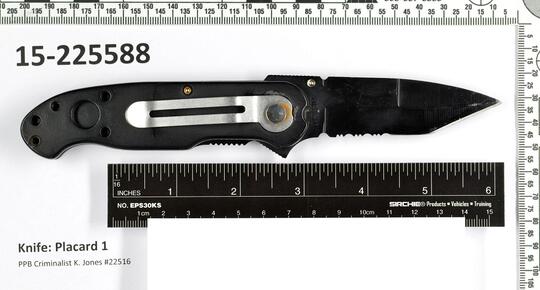