On Wednesday, January 25, 2012, at 3:17 a.m., Portland Police officers assigned to Central Precinct responded to a 9-1-1 call from a man saying he committed a robbery at knife point in Downtown Portland.  The man also said he was on top of a multi-story building and was going to jump. The man told dispatch that he could see Pioneer Square from his location.  The Bureau of Emergency Communications (BOEC) was able to determine that the man was located on top of a parking structure.

Officers responded to check parking structures at Southwest 10th and Morrison and Southwest 4th and Morrison as BOEC continued talking with the man, who mentioned shooting someone.  When asked if he had a gun, he answered “possibly.” The man told BOEC that he could see an officer circling around the building. BOEC dispatched that the man was making “suicide by cop” statements.

At 3:35 a.m., the man told BOEC that officers had found him, but he was not going to go with them. Officers were able to locate the man on the top floor of the parking structure, located at Southwest 4th and Morrison.  After waiting for cover officers to arrive, Officer David Scott, a 9-year veteran began talking with the man.

At 3:47 a.m., officers called for Project Respond and at 3:51 a.m. they called for the Crisis Negotiation Team (CNT) to respond to the location to assist in talking with the man.

At approximately 4:01 a.m., witness officers observed the man reach into a pocket and pull out what they described as a handgun and point it at Officer David Scott and Sergeant John Holbrook, a 15-year veteran, who were talking with him. Both the sergeant and the officer fired shots at the man, which caused him to drop out of sight. The man was on top of an elevated roof on the southwest corner of the parking structure. This area is surrounded by a low wall preventing a full view of the rooftop.

Because the man was located on an elevated platform that officers could not see over, officers called for the Special Emergency Reaction Team (SERT) to respond. SERT officers began arriving within 20 minutes and worked to develop a safe plan to approach the area the man went down.

SERT was able to safely approach the man using ladders and specialized equipment. At approximately 5:30 a.m., a Portland Fire & Rescue Medic assigned to SERT determined that he was deceased.  A replica of a handgun with its orange tip spray-painted black was found in Morgan’s right hand.

On February 15, 2012, a Multnomah County Grand Jury ruled that the officers were justified in the use of deadly physical force. 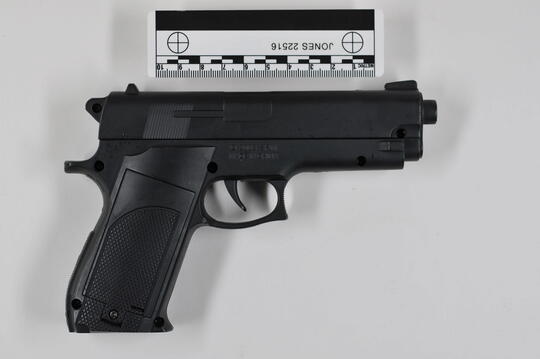