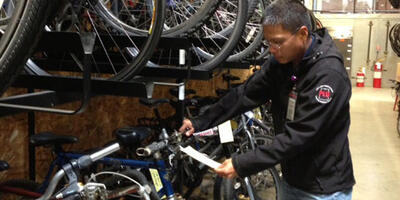 The Property Evidence Division stores the property of all persons arrested by the Portland Police Bureau; evidence seized by officers; and illegal items or miscellaneous property that comes into the possession of members of the Police Bureau.

The Property Evidence Division of the Portland Police Bureau is charged with maintaining the integrity and the chain of custody of all property and evidence submitted by Portland Police Officers, Portland State University Officers, and Oregon Health Sciences University Officers and in some cases federal agents.  This requires the safeguarding of large quantities, and often very valuable items including narcotics, currency and firearms as well as other property and evidence to include motor vehicles, hazardous materials, DNA evidence, and other sensitive items.  This division manages an average inventory of more than 300,000 individual items and receives an additional 3,400, each month.  Each item must be maintained in a secure environment, consistent with nationwide best practices, while maintaining accurate chain of custody records and the ability to be retrieved on short notice.

The Bureau of Police maintains a property and evidence division which keeps the following:

A. Property of all persons arrested by Portland Police and incarcerated in a Multnomah County Jail, except any personal items kept at the jailer’s discretion for the prisoners;

B. Evidence seized by officers or other persons in the process of making an arrest;

C. Contraband, illegal items, or miscellaneous property which comes into possession of members of the Bureau of Police.

Portland police officers frequently come into possession of medical marijuana in a variety of circumstances. Most typically, this marijuana has been taken from arrested persons who are booked into jail and their property is placed in our Property Evidence Division for safekeeping.

However, recently the Oregon Attorney General's Office issued an opinion that the Police Bureau is in violation of the federal Controlled Substances Act by returning or "delivering" the medical marijuana to its rightful owner.

We have consulted with the Portland City Attorney's Office who have reviewed this opinion and are advising us to discontinue returning medical marijuana regardless of the reason the marijuana was seized, even if the person possesses a medical marijuana card.  Therefore, effective March 20, 2012, the Property Evidence Division will no longer release medical marijuana for any reason.

2619 NW Industrial St
Suite B-4
Portland, OR
Monday through Friday 9 a.m. to noon and 1 p.m. to 4 p.m.
Get Directions
More about this location