Information
The Liaison is the primary interface between the Police Bureau and the homeless advocacy community, including social service, governmental or law enforcement agencies.
On this page

The Portland Police Bureau's Homeless Community Liaison is the primary interface between the Police Bureau and the homeless advocacy community, including social service, governmental or law enforcement agencies. The Liaison is charged with developing an action plan for police response to the homeless community and collaborates with the Bureau's Training Division to develop ongoing training for officers regarding contemporary best practices for communicating, policing, and providing services to the unsheltered community. 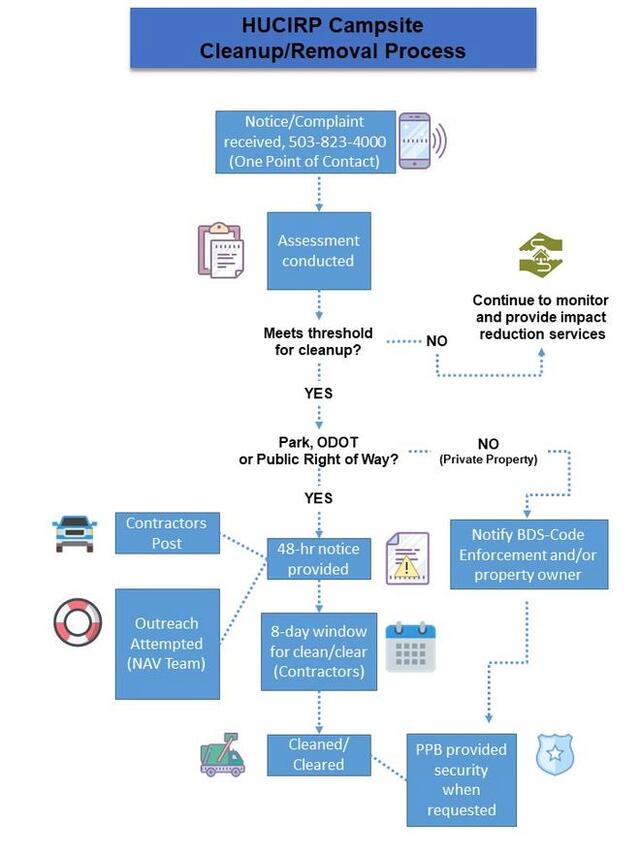 I HAVE A HOMELESS CAMP IN FRONT OF MY BUSINESS/HOME. WHY CAN’T THE POLICE DO ANYTHING ABOUT IT RIGHT NOW?

When an illegal campsite is identified and movement is necessary, the City follows a process designed to be as transparent as possible in order to reduce trauma for everyone involved. That process, mandated in the settlement of the Anderson v. Portland lawsuit, requires the City to post notification at the camp in question stating that they will have to leave. As soon as the City decides to remove the camp, service providers are notified to conduct outreach to the affected campers.

WHY WON’T THE CITY INSTITUTE A “SIT-LIE” ORDINANCE?

A "sit-lie" policy is one designed to prevent people from sitting or lying on public sidewalks. In 2009 the United States District Court ruled that the City’s “sit-lie” ordinance was unconstitutional. Since then, the City has improved public space management in numerous ways.

By creating more walking beat routes with the Portland Police Bureau, police now have greater awareness of who lives on the street and have worked to earn trust, making it much easier for people to respect public space.

Certain high-use areas are designated “high pedestrian zones”, which mandates passable sidewalk; there are many blocks in the Central City that have been given this status by the Portland Bureau of Transportation and Portland Police Bureau.

I AM WITNESSING UNLAWFUL ACTIVITY, SUCH AS DRUGS, SEX IN PUBLIC, AGGRESSIVE BEHAVIOR, AND PEOPLE USING THE PUBLIC RIGHT-OF-WAY AS A TOILET. WHAT ARE THE BOUNDARIES OF LEGAL AND ILLEGAL BEHAVIOR? WHO SHOULD I CALL WHEN I WITNESS UNLAWFUL BEHAVIORS?

The City has created a “One Point of Contact” system to allow for a more efficient, streamlined way for the public to alert the City on misuse of public space. This system allows the public to easily report concerns regarding urban camping (i.e., aggressive behavior, open drug use) without having to be shuffled from bureau to bureau in order to get an issue resolved.

Not all complaints will result in immediate action by the City. There are low-level behaviors that will continue, as the City must marshal its resources strategically. But knowing where bad behavior exists allows the City to better coordinate resources with the Joint Office of Homeless Services and A Home For Everyone.

Community members who want to report drug activity should submit a report to Police. You can send a report online using their Online Drug and Vice Complaint form.

Please continue to report instances of urban camping at www.pdxreporter.org or at www.portlandoregon.gov/campsites. If there is an emergency, dial 9-1-1.

Being homeless is not against the law. The Department of Justice has recently made it clear that not allowing people to sleep on the street may be illegal. Criminal behaviors that happen in homeless camps are addressed by Portland Police Bureau in the same manner as any other crime. If you witness criminal behavior that warrants immediate response, please call 9-1-1.

WHAT ARE THE CITY’S POLICIES ON CAMPING?

When camps are cleaned up, campers are provided at least 48 hours and as many as 10 days advance written notification. This is per HB 4054 and an intergovernmental agreement (IGA) with the Oregon Department of Transportation (ODOT). Previously, campers were provided at least 24 hours and as much as 7 days advance written notice per the Anderson Settlement Agreement, but with the IGA with ODOT the 48 hour to 10 day timeline now extends to all City and ODOT properties and rights-of-way within the City limits. The City will store any items retrieved that are determined to be of reasonable value and/or utility for up to 30 days so that people can retrieve their belongings.

City enforcement will prioritize areas that pose the greatest risk to public health and safety. The City will continue to work with social service providers and the Portland Police Bureau to actively clean up campsites and help to get individuals the services they need. Police will continue to use compassion in enforcement, recognizing that the City doesn’t have enough shelter beds for everyone, and that some people have to sleep outside.

Should higher-impact camping exist, the City will remove camps, with an emphasis on explaining how they can camp in a low-impact way and where they can go to have an indoor bed space.

HOW MANY RESOURCES DOES THE PORTLAND POLICE BUREAU SPEND ON HOMELESSNESS AND HOMELESS ISSUES?

It requires a lot of resources, particularly time, money, and people. In an effort to alleviate that, PPB has assigned an officer to the dispatch center to assist with triaging calls. This officer helps ensure an officer will be sent to calls that actually require a police response. As it is, our officers are required to spend more time on calls related to homelessness, which affects our ability to respond to radio calls in an efficient manner, during a time when our staffing levels are already low. We have an increase in demand for police response as we are experiencing a shortage in our staffing numbers, and the complexity of these calls can often require an officer to be on scene for up to an hour, particularly if there is not a criminal element to the situation.

WHAT ARE SOME MISCONCEPTIONS ABOUT WHAT POLICE CAN DO IN RESPONSE TO HOMELESSNESS?

WHY IS IT THAT WHEN SOMEONE IS ARRESTED, THEY ARE RELEASED SO QUICKLY?

There is an issue with capacity in the jail, a lack of jail beds, which can leads to an inability to accept arrestees into the jail beyond the booking process. Multnomah County Sheriff Mike Reese is addressing this issue.

DO WE NEED TOUGHER LAWS TO ALLOW POLICE TO DO SOMETHING ABOUT THE HOMELESS ISSUE?

Portland Police Officers enforce the law, and it is not their role to determine the toughness of laws. Rather, the Police Bureau recognizes a need to find the delicate balance between law enforcement and getting people the services they need in a humane and compassionate way. Often, the Police Bureau is accused of criminalizing homelessness, while simultaneously being accused of not doing enough. This is where the balance becomes necessary in cooperation with our community partners. Our police officers are in a tough position, because overall, they just want to help but don’t necessarily have the tools to do so.

HOW IS THE PORTLAND POLICE BUREAU HELPING INDIVIDUALS WHO ARE IN CRISIS?

We have a Service Coordination Team that helps identify and assist individuals who are interested in getting off the streets. We also have a Behavioral Health Unit comprised of officers who are paired with clinicians. The Behavioral Health Unit provides follow-up and resources to individuals who were in crisis and had contact with the Police Bureau. With these programs, the Police Bureau is shifting its response to be in line with the needs of the community in a way that was not historically true for law enforcement agencies.

The Liaison is not a direct responder to the community regarding the issues around those in the homeless community. The City's One Point of Contact online reporting system provides a single place to report issues surrounding urban campsites. This system provides a wide range of services based on the reports community members file online. The system is designed to provide a rapid response to complaints and concerns, and allows the City to centralize the information collection process. Use the link provided or call (503) 823-4000 to contact them directly.

Individuals looking to find health and human services in the City, should call or text 211, which can connect people with food and rental assistance, parenting resources, maternal and child health services, utility assistance and more.

All purpose information and referral
2-1-1