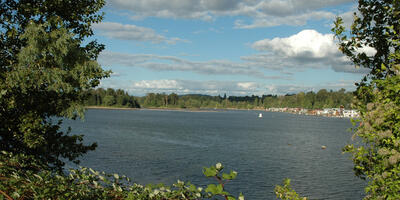 Willamette Park is a 26.85-acre regional waterfront park located east of SW Macadam Avenue at Nebraska Street, along the Willamette River. The park is an important regional destination with a variety of recreational functions. In addition, the park offers an un-programmed open lawn area for informal passive recreation and is a destination for cyclists on the Willamette Greenway Trail. The park is also an important component in the mosaic of habitat along the Willamette River, providing a valued greenspace experience.

Purple martins nest near the boat ramp. Other birds frequenting the park include gulls, sandpipers, cormorants, kingfishers, and swallows. From the north end of the park it's possible to see great blue heron and bald eagle nests on Ross Island. Osprey and Canada geese nests are visible on transmission towers on the east bank of the river near Oaks Bottom. Beavers are present in the area.

In December of 2012, Portland Parks and Recreation completed a planning effort called ‘The Redevelopment and Phasing Plan for Willamette Park’. That planning process was guided by Portland Parks & Recreation (PP&R) and the community, including a Project Advisory Committee (PAC) comprised of neighbors and engaged citizens. The plan developed a design concept that incorporates short-term developments and considers opportunities and community needs while anticipating long-range changes. A project list of prioritized improvements was generated from the redevelopment plan.

The 2015 Redevelopment Project is a strategic sequence of improvements to preserve and enhance an already popular and well-functioning park. This project’s proposed improvements were generated from 2012 planning process. Proposed improvements will improve the entrances and greenway trail amenities for the park, which will see heavy increases in bike and pedestrian traffic as the new Tilikum and Sellwood Bridges are completed. The park’s internal circulation system will also be enhanced, with new connector trails to create more looped walks. The dog off-leash area (DOLA) will be moved from the current location, along the west edge of the park, to an open area at the north end of the park, allowing the Bureau of Environmental Services to improve the existing oak tree habitat. In the southern portion of the park, circulation improvements associated with the new pump station and a new entrance for the SW Miles Place (south entry) are being redesigned.

Visit our Parking Guide for Parks for more information.

The park is part of the Willamette River floodplain and used to be called 'Carp Flats' - referring to access to carp during seasonal flooding. One of the largest Oregon white oaks along the Willamette Greenway dates back to the Revolutionary War and is found in the south end of the park.

SW Macadam Avenue and Nebraska Street
Portland, OR 97219
Get Directions