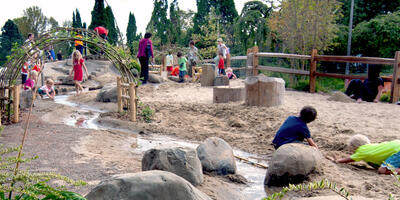 A New Pedestrian Bridge is Coming Soon to Westmoreland Park

Westmoreland Park visitors will soon have a great new connection! Portland Parks & Recreation is replacing one of the park’s pedestrian bridges over Crystal Springs Creek as part of the Westmoreland Park Master Plan. The new crossing, on the north side of the nature-based play area, will replace the bridge removed in 2018.

The new pedestrian crossing will be safer and more accessible for park visitors. A longer bridge span will improve habitat conditions and contribute to stream restoration efforts. The new bridge features low maintenance, long-lasting materials and will reflect other design elements in the park.

Onsite work to prepare the bridge footings and repair the access path will begin in May. Fencing will surround the construction area until the project is complete. The new pedestrian crossing will open this summer.

Funding for this project comes from the Parks & Recreation Capital Renovation Program. The new bridge structure was designed by Exeltec Consulting and is being built by Conway Construction. The original bridge was unsafe and removed in 2018.

The 2014 play area renovation was a pilot project for PP&R's Nature-Based Play Initiative. The goal of this initiative is to create settings in developed parks that encourage creative play and interaction with natural features.

As the pilot for the Nature-Based Play Initiative, this project provides an opportunity to build relationships with local education and child development programs. The Project Advisory Committee will serve as advisors to achieving the goals of natural and creative play and interaction with nature.

This project was supported with funding from Metro's voter-approved 2006 natural areas bond measure.

Crystal Springs Creek is a tributary of Johnson Creek, and is home to fish, river otter, heron, eagles, and frogs. Its naturally cool water and steady, year-round flow provide ideal fish habitat. Endangered salmon and trout, including coho, Chinook, and steelhead migrate through Westmoreland Park to the ocean and back again to spawn. Crystal Springs Creek is a place for children and adults to experience and enjoy nature in the city.

In 2003, Portland Parks & Recreation worked with the community to develop the Westmoreland Park Master Plan, adopted by Portland City Council in 2004. Restoring Crystal Springs Creek and transforming the duck pond into a wetland are essential components of the plan. The Master Plan calls for additional improvements to the park.

The U.S. Army Corps of Engineers, Bureau of Environmental Services (BES), Portland Parks & Recreation, TriMet, and Metro are partners in this project.

Additional historical information and photos on Westmoreland Park can be found here.

Westmoreland Park began as a part of a residential subdivision that was subtracted from the Ladd Estate's Crystal Spring Stock Farm in 1909. In 1924, the property was used as golf links, likely in conjunction with what is today known as Eastmoreland Golf Course. Prior to the 1920s, dating back as far as 1852, the property was used as farmland. By the 1930s, the site east of the subdivision had been converted from a wetland to serve time as a dairy, brickyard, and airstrip known as Broomfield Field (named after a Reed College Graduate by the name of Hugh Broomfield who lost his life over German Lines in WWI while on a recon mission.) However, as development increased, residents requested that these empty fields be turned into a city park.

In 1935, the City Planning Commission recommended development of recreational amenities for the nearby residents and "the improved appearance and traffic safety of McLoughlin Boulevard as a major traffic freeway entrance to the city." In January 1936, the City of Portland purchased the 45-acre parcel called Fairways Addition from Oregon Iron & Steel Co., a business owned by the Ladd Estate Co. After purchasing the land, the City of Portland immediately commissioned Francis Benedict Jacobberger to create a Study Sketch and Preliminary Layout for the West Moreland Recreation Park. F. B. Jacobberger was the son of Joseph Jacobberger, a principal of the architecture firm Jacobberger & Smith, founded in 1912. From 1921, the younger Jacobberger worked as a draftsman in his father’s office; when the elder Jacobberger died in 1930, Francis Jacobberger continued the firm in his own name.

As initially conceived, the park included (from roughly north to south) a park office and restroom building, outdoor handball courts, a roller-skating rink, basketball courts, twelve tennis courts, two children’s play areas, two picnic parks, a model yacht lagoon, bowling greens, a horseshoe pitching area, a fly-casting pond with nearby dry-casting area and fly-caster’s club house, four baseball diamonds, two football fields, a lacrosse field, a soccer field, various portable bleachers, and dressing rooms. Water from Crystal Springs, which entered the park at the north end, was to feed both the model yacht lagoon and the casting pond before flowing through to the south end of the park. Both the lagoon and pond were also intended for use as ice-skating rinks in the colder winter months.

A partnership between the City of Portland and the federal Works Progress Administration (WPA) helped escalate the park’s construction. Viewed as an important opportunity to employ laborers during the rough economic times following the Great Depression, park construction focused on manual labor in order to employ the greatest number of people. The fly-casting pond, specifically, was hand excavated, and was one of the first features completed at the park. By August 1936, the pond was home to the 28th Annual International Casting competition.

By the end of the first year of construction, projects at West Moreland (now Westmoreland) Park included the aforementioned casting pond, as well as the beginnings of the model yacht lagoon. In spite of "the persistence of farmed fields along the southern and northern portion" of the park project, several ball fields in the southwestern portion of the park were also under construction. Of particular note was concern regarding field drainage, which required additional attention in the form of hand-dug trenches topped with fine sand and/or gravel that connected to the creek through sewer pipes. (The need for additional drainage is not surprising given the original marshy topography of the Crystal Springs watershed as it flowed through the park.) Rustic bridges, constructed from local trees, were built for pedestrian crossings to span Crystal Springs Creek; the use of local materials in a rustic style was typical of WPA construction, especially for park-like settings.

In spite of the progress, the park project was closed due to lack of funds in approximately June 1937.11 By April 1939, however, interest in restarting the project was evident, and the project as reopened on July 26 that year. The work to date had varied slightly from the original study sketch, and some features, notably the model yacht lagoon, were constructed ahead of schedule to provide employment for the largest number of men. A major variation to the original design was the manner in which the casting pond received water from Crystal Springs. As initially designed, water would flow from the north end of the park, through the model yacht lagoon, into the casting pond, and then south through the park along the natural stream channel. However, as construction progressed, it became apparent that this course would not work, as the elevation of the fly-casting pool was higher than that of the creek. To fill the pool, water was taken from a point 3,000 feet northwest (within Eastmoreland Golf Course). The water through the lagoon continued along the natural streambed without further diversion.

The West Moreland Park project reopened on July 26, 1939, with approximately 300 men employed via the WPA for a total federal contribution of around $225,000. The casting-pond floor was concreted, the ball fields were graded, and at least one wood vehicular bridge was constructed across Crystal Springs Creek. Also in 1939, local druggist Nick Sckavone advocated for construction of an adult baseball stadium, which was constructed in 1942 and, in 1955, was renamed Sckavone Field in his honor (now Sckavone Stadium).

In 1945, lawn bowling facilities were constructed; the grass playing surface is also used croquet and the gravel playing surface is used for petanque. A restroom/picnic shelter, originally called the Field House, was built in 1949. The model yacht lagoon, as initially constructed, included a sloped soil shoreline with native plantings. In 1952, the lagoon was re-formed into the wading pool, a concrete-lined structure in roughly the same alignment as the previous water feature. Also during this time, Crystal Springs Creek appears to have been channelized through the length of the park, using both poured concrete and concrete stone blocks. In later years and into the present day, the persistent presence of waterfowl in the pool caused a change in the naming convention, with the wading pool now commonly referred to as the duck pond.

Installed in 1979, Uroboros, the name for an ancient Egyptian and Greek symbol that depicts a snake that bites its own tail, was created by Charles Kibby.

During the 1940s the first incidents of Crystal Springs overflowing its banks were documented. In 1974 it was reported that the concrete walls which channelized Crystal Springs Creek were failing. Also, in the 1970s, complaints were registered about ducks and geese creating menacing situations, dogs running loose, and parking problems. During the 1980s, swimming in the casting pond and Crystal Springs became a concern for local residents and PP&R staff because of water quality and safety issues. From 1996 to 1998, periodic flooding in the park inundated picnic areas, playgrounds, and paths. When the waters finally receded, leaving behind damaged stream edges and dying trees, questions about the future of the creek and park arose.

In order to address these issues, a master planning process for the park, with community input, began in 2002; a final plan was approved in 2003.

SE McLoughlin Blvd and Bybee Blvd
Portland, OR 97202
Get Directions