Most City of Portland offices will be closed Monday, May 30, to observe Memorial Day. 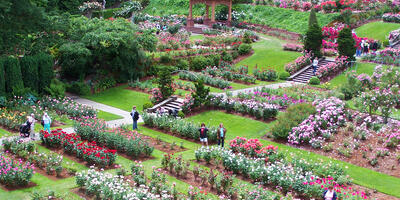 More than 10,000 individual rose bushes bloom in the International Rose Test Garden (IRTG) from late May through October, representing over 610 different rose varieties. The majority of roses in the Garden are commercially available. About 10 to 20 varieties are replaced each year with some of the best new roses released onto the market.

The primary purpose of the Garden is to serve as a testing ground for new rose varieties. In the beginning, while World War I was raging, hybridists sent roses from around the world to Portland’s garden for testing.

Plan your visit with parking, transit, and shuttle information from Explore Washington Park.

Pay to Park is in effect in Washington Park. When parking, use the Parking Kitty app or website.

Tour Groups
Due to COVID-19, guided tours are currently canceled until further notice. Guided tours for groups of 11 or more are available seasonally starting in the spring, for a nominal fee per person. Call 503-823-3664 to make arrangements. Visit the Rose Garden Store website at rosefestival.org/buy/rose-garden-store.

The Washington Park International Rose Test Garden celebrated its Centennial anniversary in 2017. With funding from the Parks Replacement Bond, this project removed ADA accessibility barriers from the main promenade within the Rose Garden and improved the connection to the parking lot, so that all Portland residents and visitors can equally enjoy this space for the next 100 years. Read more about these improvements on our Parks Replacement Bond page.

Portland has long had a love affair with roses. In 1888, Georgiana Burton Pittock, wife of publisher Henry Pittock, invited her friends and neighbors to exhibit their roses in a tent set up in her garden; thus the Portland Rose Society was established.

Madame Caroline Testout was a late 19th-century French dressmaker from Grenoble, the proprietor of fashionable salons in London and Paris. She regularly purchased silks from Lyon, which was an important center for rose breeding. The nurseryman Joseph Pernet-Ducher was called 'The Wizard of Lyon' due to his success in developing hybrid tea roses. Madame Testout was an astute businesswoman and understood the value of good publicity. She asked Perner-Ducher to name one of his new roses after her. He agreed but considered her choice of seedling to be mediocre. The 'Madame Caroline Testout' rose made its debut at the salon's 1890 spring fashion show. It was not strong on scent, but became an immediate success with Madame Testout's well-to-do customers as well as the gardening public for its abundant silky, rose-pink flowers. The new variety's popularity spread to America, and in Portland, nearly half a million bushes of 'Caroline Testout' were planted along the sidewalks. By 1905 Portland had 200 miles of rose-bordered streets which helped attract visitors to the Lewis and Clark Centennial celebration. Portland came to be known as the 'City of Roses'.

In 1915 Jesse A. Currey, rose hobbyist and Sunday editor of the Oregon Journal, convinced city officials to institute a rose test garden to serve as a safe haven during World War I for hybrid roses grown in Europe. Rose lovers feared that these unique plants would be destroyed in the bombings. The Park Bureau approved the idea in 1917 and by early 1918, hybridists from England began to send roses. In 1921 Florence Holmes Gerke, the landscape architect for the city of Portland was charged with designing the International Rose Test Garden and the amphitheater. The garden was dedicated in June 1924. Currey was appointed as the garden's first rose curator and served in that capacity until his death in 1927.

Part of the original design, the Royal Rosarian Garden is home to the namesake roses of all past Prime Ministers of the Royal Rosarians, a civic group that serves as the official greeters and goodwill ambassadors for the City of Portland. Founded in 1912, the Order of Royal Rosarians modeled their mythical 'Realm of Rosaria' after the government of England’s King Henry VII, whose rise to the throne in 1485 ended the War of the Roses. Members are 'knighted' into the organization under their chosen variety of rose, which is then their 'namesake' rose. The garden also features a stone bench honoring Jesse Currey.

In 1945, the Shakespeare Garden, located at Crystal Springs Lake in southeast Portland, was moved to Washington Park to allow for the expansion of Eastmoreland Golf Course. Designed by Glenn Stanton and Florence Gerke, it was originally intended to include only herbs, trees, and flowers mentioned in William Shakespeare's plays. The garden continues to honor the Bard with roses named after characters in his plays. The focal point of the garden is the Shakespeare Memorial, a brick wall with a plaque featuring Shakespeare’s image and his quote, "Of all flowers methinks a rose is best." Donated by the LaBarre Shakespeare Club, it was dedicated on April 23, 1946 - the 382nd anniversary of Shakespeare's birth. In 1957 the club added a sundial to the garden.

In 1967, rose curator Rudolph Kalmbach wanted to establish a formal garden featuring Gold Award roses. (In 1919 the City of Portland issued its first annual Gold Award for the best new rose variety.) With the support of the Portland Rose Society, Wallace Kay Huntington was selected to design the garden which was dedicated in June 1970. In 1991, the Portland Rose Society donated the pavilion which overlooks these award-winning roses.

Established in 1975, the Miniature Rose Garden is one of only six testing grounds for the American Rose Society (ARS) miniature rose test program. The national annual winners from both ARS and AARS associations are displayed in the middle of the garden along the center aisle.

Set in a sunken section on the upper level of the garden, the Frank Beach Memorial Fountain was dedicated in June 1975. The stainless steel sculpture, titled Water Sculpture, was designed and built by Oregon artist Lee Kelly. The fountain was a gift from the Beach family to honor their father, Frank Edwin Beach (1853-1934), the man who is said to have christened Portland the 'City of Roses' and who first proposed the annual Rose Festival.

Awards
The award called Portland’s Best Rose was established in 1996. Rose experts from around the world attend a one-day judging in June and select the best rose that day from thousands of submissions. Portland remains the only North American city to issue such an award. In 2006, the International Rose Test Garden received The Garden of Excellence Award from the World Federation of Rose Societies.

In 2017, the Garden’s Centennial anniversary, a construction project funded by the 2014 Parks Replacement Bond removed ADA accessibility barriers from the main promenade within the Rose Garden and improved connections to the parking lot.

Special Note on Parking
Parking for cars is very limited in Washington Park, especially during warm, sunny weekends. About 40% of all visitors skip the parking and arrive by rideshare, walking, biking or using TriMet transit service. Once you’re in the park, use the free seasonal shuttle to explore the park.