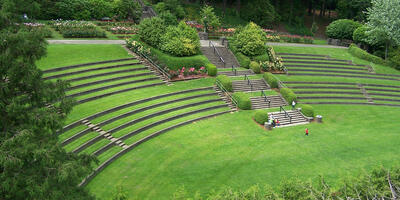 11/15/2022 | The Washington Park Archery Range will be closed for maintenance on Wednesday, November 16. Thank you for your patience and support.

From November 18 - January 7 event rate parking will be in effect in Washington Park for the hours of 4:00 pm - 10:00 pm. Please check the parks parking guide for more details.

Tips For a Safe Park Visit

Car prowls occur throughout the City of Portland including within Washington Park. Please see Tips For a Safe Park visit to learn more how you can help reduce the chance of your vehicle becoming a target.

Getting to and around Washington Park

Parking is very limited in Washington Park, especially during warm, sunny weekends. About 40% of visitors skip the parking lot altogether and arrive by rideshare, walking, biking, or using TriMet transit service. Once you’re in the park, use the free seasonal shuttle to get around!

The Washington Park Free Shuttle provides a safe, convenient way to explore all the venues and attractions in the park. Shuttles arrive approximately every 15 minutes and are all ADA accessible. The full loop takes about 30 minutes and connects with TriMet MAX Light Rail Red and Blue lines, as well as the TriMet bus line 63. See the current shuttle schedule.

Parking fills up quickly, so it’s best to use TriMet, walk, bike, or rideshare to get to the park. If you’re coming by car, you must pay to park. For more information on paying to park, visit the parks parking guide.

Where does parking revenue go?

The secret is out: Washington Park is a great place to be. As a result, we must find ways to address congestion in and around the park. In 2014, the cultural institutions in Washington Park and Portland Parks & Recreation formed a transportation management associate, known as Explore Washington Park. This nonprofit organization oversees the transportation and parking management program within the park. This program has resulted in a significant decrease in driving trips to Washington Park, while also increasing overall attendance and improving the overall visitor experience. Learn more

We’d love to hear from you! Please provide your comments through our Washington Park Experience Survey.

Washington Park is one of the oldest parks in Portland. Today, Washington Park has over 15 miles of trails, some of which are part of the 40-Mile Loop connecting Washington Park with Pittock Mansion, Forest Park to the north, and Council Crest to the south.

Washington Park is celebrating its 150th anniversary with Discovery Points, locations throughout the Park that highlight stories and culture from the past 150 years and present.

Chiming Fountain
In the main circle of the park is the Chiming Fountain. Water drips from one bronze pan to another, and gargoyles around the base spout water. Commissioned by the city for $400 in 1891, the cast iron fountain was created by John (Hans) Staehli, a Swiss woodcarver, who designed it after a Renaissance fountain. Originally the fountain was painted white and was topped by a cast iron figure of a boy holding a staff from which water spouted.

At some point over the years, the staff disappeared. The last known record of it was in 1912 when Willis McElroy's band was photographed in the nearby bandstand. In the 1920s, during a spell of freezing weather, water left in the fountain expanded and destroyed the figure of the boy. It was never replaced.

In 1960, the fountain was in such disrepair that the city was ready to scrap it. Local longshoreman Francis J. Murnane, whose avocation was the preservation of historic buildings and objects, appealed to Mayor Terry Schrunk and the park bureau was authorized to begin restoration. Much of the original decoration had disappeared so replicas were created from existing pieces for $450. With the additional costs of reassembly and installation, the total came to a little over $1,772 - a good investment!

Lewis and Clark Memorial
Placed at the entrance to the park, the Lewis and Clark Memorial is a 34-foot, rectangular granite shaft with each side bearing a large bronze replica of the great seals of the States of Oregon, Washington, Montana, and Idaho which comprised the Northwest Territory. This was the only portion of the United States that was acquired by discovery and therefore was never under a foreign flag.

President Theodore Roosevelt laid the foundation stone on May 21, 1903. He was assisted by the monument's designer, Portland stonecutter Otto Schumann. The memorial was completed in 1908.

Completed in 1904, this bronze statue, sculpted by Hermon Atkins MacNeil and cast by Bureau Brothers Foundry in Los Angeles, features two Native Americans standing on a block of rough-hewn native stone. Facing eastward, they look down upon the route that ox teams trudged bringing settlers to this part of the country. The older of the two is said to represent Chief Multnomah of the Multnomah people. At some point, the oak branch held by the younger figure was broken off.

Sacajawea Statue
A bronze statue of Sacajawea holding her son Jean-Baptiste is located near the Chiming Fountain. In commemoration of the heroic Shoshone Indian woman who helped lead the Lewis and Clark explorers through the mountains of the west, the statue was unveiled on July 7, 1905, at the Lewis and Clark Centennial. Among those present at the event were Susan B. Anthony, Abigail Scott Duniway, and Eva Emery Dye.

The project was promoted and paid for by subscriptions solicited nationwide by a group of Portland women headed by Mrs. Sarah Evans. The committee commissioned Alice Cooper of Denver, at that time an understudy of Lorado Taft, to sculpt the statue. It was cast in New York and required 14 tons of copper which came from the Sweden mine, just below Mt. St. Helens. The copper was donated by Dr. Henry Waldo Coe of Portland.

In April 1906, the statue was placed in its current location in Washington Park. Its inscription reads, "Erected by the women of the United States in memory of the only woman in the Lewis & Clark expedition, and in honor of the pioneer mother of Oregon."

Oregon Holocaust Memorial
Located near the corner of Washington Way & Wright, the Oregon Holocaust Memorial was dedicated on August 29, 2004. The memorial features a stone bench adorned with wrought-iron gating, screened from the street by rhododendron bushes. The bench sits behind a circular, cobblestoned area - simulating a town square.

During the Holocaust, many Jewish families were gathered in town squares before being loaded onto trains and taken to concentration camps. The square contains scattered bronzes of shoes, glasses, a suitcase, and other items to represent everyday objects that were left behind. A European-style, cobblestone walkway with inlaid granite bars, simulating railroad tracks, leads to a wall of history panels - giant, stone placards that offer a brief history of the Holocaust and quotes from Holocaust survivors.

At the end of the wall is the soil vault panel. Buried below the panel are interred soil and ash from six killing-center camps of the Holocaust - Chelmno, Treblinka, Sobibor, Belzec, Majdanek, and Auschwitz-Birkenau. The back of the wall is engraved with the names of people who died in the camps, followed by the names of their surviving relatives in Oregon and SW Washington.

Originally acquired in 1871, Washington Park is one of the oldest parks in Portland. The city originally purchased the 40.78 acres in 1871 from Amos N. King for $32,624. Many people questioned the purchase given that the site was thick with brush and timber, and cougar roamed the hills.

City Park, as Washington Park was originally known until 1912, developed slowly. In 1885, the city hired Charles M. Myers as its first park keeper. A native of Germany and a seaman, Myers had no formal training but enthusiastically began to develop the park by using his memories of European parks as a guide.

By 1900, the park had developed from a wilderness to a place of drives, walkways, formal plantings, lawns, clipped hedges, and ornamental flower displays.

In 1903, John C. Olmsted toured Portland and recommended changes of lasting usefulness to the park: he advised changing the name from City Park to one of more distinction, moving the main entrance to Park Place, separating vehicular traffic from foot traffic, and restoring some of the formally planted areas to their natural beauty with native shrubs and ground cover.

The last major land addition to Washington Park was made in 1922 when the entire 160-acre County Poor Farm was transferred to the Park Bureau. The southern half of the property was developed into the 9-hole West Hills Golf Course. The remainder was designated as a municipal arboretum in 1928.

Washington Park was also the site of Portland's first zoo, which Dr. Richard B. Knight began as an animal attraction in the mid-1880s. Dr. Knight was an English-born seaman who became a pharmacist upon moving to Portland. He purchased two bears (a grizzly named Grace and a brown bear named Brownie) along with other animals from his seafaring friends and exhibited them on a vacant lot next to his downtown pharmacy.

By 1887, the popular collection had outgrown its quarters, so Dr. Knight donated the animals to the city for a zoo. The animals were moved to the area near the current reservoirs. The collection grew rapidly. By 1894 there were about 300 specimens, mostly North American species plus some monkeys, a kangaroo, and some foreign birds. The city park keeper, Charles Myers, became the zookeeper as well.

He constructed the bear pit, which is believed to have been the first sunken, barless cage anywhere in the world. In 1925, the zoo moved to a higher location, the present site of the Japanese Garden. The zoo opened at its present location in 1959 and in the 1960s its management was transferred to Metro.

The Rotary Club of Portland spearheaded a $2 million fund-raising effort that culminated in the 1995 construction of the Rose Garden Children's Park, a popular, accessible play area for children of all ages.

Parking with an Oregon Wheelchair User or Wounded Warrior placard:

All disabled parking placard/plate holder MUST follow all other posted signs.