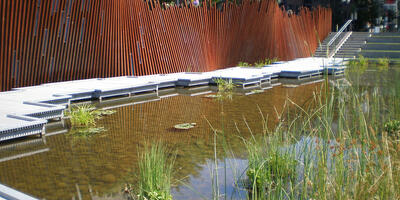 This park is maintained with the volunteer assistance of the Friends of Tanner Springs. To find out how you can help at your neighborhood park, call 503-823-5121.

What is now known as the Pearl District was once a wetland and lake fed by streams that flowed down from the nearby hills in southwest Portland. These wooded hillsides provided a natural filter for the streams, cleansing the water as it made its way to the Willamette River. The springs from Tanner Creek, named for the tannery built by pioneer Daniel Lownsdale in 1845, flowed into the shallow basin of Couch Lake, now the area surrounding Tanner Springs Park. As the population of Portland grew in the late 19th century, Tanner Creek was rerouted through an underground system of pipes to the Willamette River. The lake and the surrounding wetland were eventually filled to make way for warehouses and rail yards which in turn were replaced by residences, shops, and public spaces. Today, the park sits about 20 feet above the former lake surface.

From the beginning of the planning efforts for the Pearl District in the early 1990s, the creation of a network of open spaces was an important goal of both the neighborhood and the City. In 1998, a conceptual plan for the new parks and open spaces was proposed by the Tanner Creek and Water Feature Steering Committee and approved by City Council. Those recommendations served as a point of departure for planning the district's parks.

In June 1999, Peter Walker & Partners, a landscape architecture firm, was retained to provide concepts for three new parks between Tenth and Eleventh Avenues in the River District. They developed and refined plans for the parks with input from a Project Steering Committee and two public workshops. The final plan is characterized by a series of recurring elements which strengthen the connection between each of the three parks. Jamison Square was the first to be developed.

North Park Square was the working name given the second block to be developed. Planning for this park began in early 2003. Atelier Dreiseitl, a renowned German design firm, and GreenWorks, P.C., an award-winning, local landscape architecture firm, were selected to design the park. A series of community workshops were held between January and June 2003, allowing the public to participate in the design process. After committee review, the name Tanner Springs was adopted in April 2005. The springs connect the park to Tanner Creek that at one time flowed openly through this area; today it flows through large pipes beneath the city streets. Since the design of the park attempts to recapture the area's past with its native wetlands and flowing runnels, the name is fitting.

The Artwall runs along the east edge of the park. It is composed of 368 railroad tracks set on end and integrates 99 pieces of fused glass inset with images of dragonflies, spiders, amphibians, and insects. The images were hand-painted by Herbert Dreiseitl directly onto Portland glass, which was then fused and melted to achieve the final effect.

NW 10th Avenue and Marshall Street
Portland, OR 97209
Get Directions