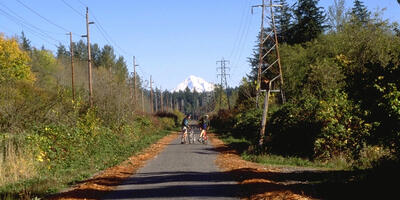 The Springwater Corridor is the major southeast segment of the 40-Mile Loop which was inspired by the 1903 Olmsted plan of a parkway and boulevard loop to connect park sites. The eventual developed trail will be over 21 miles long.

For the most part, the trail is well separated from the public road. The route is a scenic one, encompassing wetlands, buttes, agricultural fields and pastures, residential and industrial neighborhoods. Close to Johnson Creek, one of the last free-flowing streams in Portland's urban area, the trail criss-crosses the stream on its course to the Willamette River. The Corridor connects several parks and open spaces including Tideman Johnson Nature Park, Beggars-tick Wildlife Refuge, the I-205 Bike Path, Leach Botanical Garden, Powell Butte Nature Park, and Gresham's Main City Park.

The Springwater Corridor is a multi-use trail. The paved surface is generally 10-12 feet wide with soft shoulders. The hard surface trail is designed to accommodate walkers, joggers, hikers, bicycles, wheelchairs, and strollers. Equestrian use is more common east of I-205 where a separate soft surface path meanders away from the main trail where topography allows.

Himalayan blackberry used to dominate much of the Springwater landscape. It is a non-native plant and so invasive that it chokes out native plants. Over a decade of projects have helped control invasive plants and improve wildlife habitat. Look beneath the PGE transmission lines for new plantings of native shrubs and small trees such as red-osier dogwood, elderberry, Indian plum, and willow. Some of the adjacent natural areas such as Oaks Bottom Wildlife Refuge and Beggars-tick Wildlife Refuge feature a wide variety of habitats including open water, shrub/scrub marsh, cattail/smartweed marsh, and forested wetland; Powell Butte Nature Park features open meadow with stands of orchard trees and forested slopes below; and Tideman Johnson Natural Area contains a small riparian woodland.

Johnson Creek and the Springwater Corridor are intertwined, with at least 10 trail bridges over the creek. The creek was once host to abundant native fish populations, including threatened salmon species. Following a series of floods in the mid-1990s, the City of Portland began acquiring properties in the Johnson Creek floodplain. Protected as natural areas, these properties provide flood storage, wildlife habitat, and opportunities for wildlife observation along the Corridor. Ongoing streambank restoration will improve habitat and water quality for threatened fish species.

The Springwater Corridor is a former rail corridor; the Springwater Division Line was developed for rail service in 1903. By 1906, under a joint ownership with Portland General Electric and the Portland Railway Light and Power Company, the line reached its peak usage. By 1910, the company had six electric plants and 161 miles of rail, carrying 16,000 passengers each year on a citywide system. In addition to passengers, the rail hauled farm produce to Portland markets. It was at this time it acquired the name Springwater Line, probably because of the planned connection to the community of Springwater on the Clackamas River. It was also known as the Portland Traction Company Line, the Cazadero Line, and the Bellrose Line.

Many communities developed along the Springwater Line including Sellwood, Waverley Heights, Eastmoreland, Woodstock, Errol Heights, Lents, Powellhurst-Gilbert, and Pleasant Valley. Towns that developed along the line include Milwaukie, Gresham, Boring, Eagle Creek, Estacada, and Cazadero. During the peak of the railroad era, the Springwater Line was the linkage between these communities. To encourage weekend use, the rail corporation developed destination parks along the line such as Oaks Amusement Park on the banks of the Willamette River in Sellwood. These parks became major attractions, drawing thousands of passengers each weekend.

Passenger service was discontinued in 1958. Much of Springwater Corridor was acquired by the City of Portland in 1990, with additional acquisitions by Metro in the following years. Master planning for the Corridor began in 1991 and included input from community members, agencies, organizations, and municipalities, including Portland Department of Transportation; Oregon Department of Transportation; the cities of Gresham and Milwaukie; Metro; Clackamas and Multnomah counties; the 40 Mile Loop Land Trust; and the Johnson Creek Corridor Committee.

Construction of the initial Portland segment was completed in September 1996. The trail through Gresham was built in 1996 and an additional mile east of Gresham was built in 2000. With the completion of a 3-mile segment from SE Ivon to SE Umatilla Streets (known as Springwater on the Willamette) in 2005, the part of the trail within Portland is nearly complete.

SE Ivon Street to Boring, Oregon
Portland, OR
Get Directions