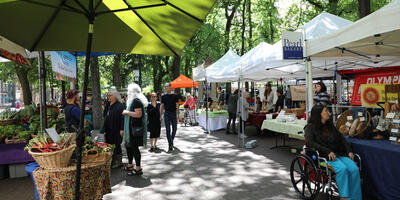 The Future of South Park Blocks

Portland Parks & Recreation has begun to shape the future of the South Park Blocks; one of Portland’s oldest and most popular parks. This 12-block greenspace stretches north from the campus of Portland State University, serving as a front yard for residents and businesses of the Cultural District. The park hosts vibrant community events and programs for Portlanders and regional visitors throughout the year.

This park is maintained with the volunteer assistance of the Friends of South Park Blocks. To find out how you can help at your neighborhood park, call 503-823-5121.

Prior to European settlement in the mid-19th century, the Willamette and Columbia rivers supported Native villages and fostered a vigorous trade network throughout the basin and beyond. Indigenous groups made significant contributions to the land since time immemorial. Despite the harm that has been done to these communities, Indigenous people in Portland continue their cultural practices and sacred connections to the land today. The proximity of the South Park Blocks to the Native American Student and Community Center (NASCC) at Portland State University provides a great opportunity to reconnect to this history and weave these stories and cultural practices into the urban park.

By the 1840s, Indigenous populations had been devastated by epidemics of introduced European diseases as settlers started to encroach the land that would become downtown Portland. In 1852, one of these settlers Daniel H. Lownsdale designated eleven narrow blocks at the western edge of town for public park space. Between 1852-75 the park was an unimproved roadway on the outskirts of the city center; the southern portion up to Jefferson was part of the Great Plank Road. During the 1870s the area became a residential neighborhood with large Italianate mansions, schools, and churches. In 1877 the first landscaping of these blocks occurred when the City Council authorized florist and landscape designer Louis G. Pfunder to plant 104 Lombardy poplars and elms between Salmon and Hall. The Ladd School opened on the present Portland Art Museum site in 1879. In 1885 the city's first parkkeeper was appointed and a more formal park began to develop. The development of the South Park Blocks reflected Eurocentric spatial organization and design details that were popular in U.S. cities since the mid-1800s. When the park was first planted with a grid of trees in 1877, inspiration for the South Park Blocks may have included Boston’s Commonwealth Avenue Mall (built 1858-1870s) and other park designs inspired by tree lined Parisian boulevards.

By the 1880s many lots were subdivided for smaller residences; by the turn of the century, apartment buildings were developed. Lincoln High School was located at Park and Market. Following the VanPort flood, the VanPort Extension School was relocated to the Lincoln High School building and grew to become Portland State University. The campus from Market to Jackson was established in the 1950s. In 1973 the campus was redesigned and streets closed off.

Today there are twelve South Park Blocks stretching through the heart of downtown Portland. Public art can be found throughout the South Park Blocks but is historically limited in what or whose stories are told. Potential replacement and new public art should represent more diverse cultural identities and histories. On the block between Hall and Harrison is the most recent addition. Installed in 2004, this work made of white Indiana limestone by Oregon sculptor Donald Wilson is entitled Holon. The word comes from the Greek holos which means whole, entire, complete in all its parts - something that has integrity and identity at the same time as it is a part of a larger system. A block north at Montgomery is the 1973 bronze statue and fountain Farewell to Orpheus by Frederic Littman (1907-79).

In the center of the block between Market and Clay is a granite mosaic sculpture by Oregon artist Paul Sutinen. In the Shadow of the Elm, installed in 1984, depicts the shadow of a tree that may have once existed within the grid of trees in the block. In the center of the block between Columbia and Jefferson is a very different sculpture, also installed in 1984. Comprised of three large granite pillars, Peace Chant is the first known peace memorial in Oregon. Sculptor Steve Gillman wished to express his own advocacy for peace as well as that of the nearby churches. In May 1985 the City Council named this block Peace Plaza.

Located between Main and Salmon is the Shemanski Fountain, given to the city by Joseph Shemanski in 1926 to "express in small measure gratitude for what the city has done for me." Shemanski (1869-1951) was a Polish immigrant who started out as a traveling clock salesman before he founded the Eastern Outfitting Co. and became an extremely successful businessman. The triangular structure of cast Oregon sandstone was designed by Carl L. Linde, a local architect whose work included many fine homes, hotels, and apartments. The fountain includes three small, low drinking basins for dogs.

The original design included a large central planter, but after the fountain was erected, Shemanski felt that a sculpture would better complete the graceful cupola. He commissioned Oliver Laurence Barrett, an art professor at the University of Oregon, to create a bronze statue of Rebecca at the Well. It is not clear why Rebecca was chosen, but as the wife of Isaac in the Old Testament known for her hospitality to strangers and kindness to animals, she was a fitting choice.

At the northern end of the block at Salmon sits the Simon Benson Memorial which was constructed in 1959. It was planned by architect Albert E. Doyle while designing the Benson Hotel. A round bronze plaque with a bas relief of Simon Benson, timber baron and philanthropist, is mounted on the curved brick wall with stone benches. He looks out at a drinking fountain which represents one of the 24 bowl fountains that Benson gave to the city in 1912.

The newest park on the Blocks is Simon & Helen Director Park located between Taylor & Morrison. The site was a surface parking lot donated to the city by real estate developer Tom Moyer who also made a substantial contribution toward the design and construction of the park. Another generous contribution was made by philanthropist Jordan Schnitzer who named the park in honor of not only his maternal grandparents but of all immigrants who helped to build Portland. The design team was led by internationally renowned landscape architect Laurie Olin whose projects include Bryant Park and Battery Park in New York City and Canary Wharf in London.

SW Park Avenue from Salmon Street to Jackson Street
Portland, OR 97205
Get Directions