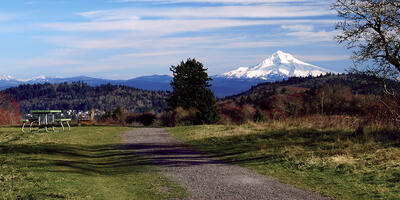 During freezing temperatures, the main entry from SE 162nd Avenue to the visitor center parking lot may be closed when hazardous/icy conditions are present. Park users should be aware they may arrive to a closed gate at the entrance.

Dogs are allowed on trails at Powell Bute Nature Park only while leashed. Dogs are not allowed off-leash or off-trail.

The Friends of Powell Butte is an organization consisting of neighbors and friends dedicated to and concerned about the qualities and resources of Powell Butte Nature Park. The association works closely with PP&R in planning and implementing park improvements, and providing volunteer services and citizen input. Monthly meetings are held the third Thursday of each month at the visitor center. For more info, go to Friends of Powell Butte.

Powell Butte, an extinct cinder cone volcano, rises near the headwaters of Johnson Creek - an urban creek with remnant populations of native salmon and steelhead. The park is comprised of 611 acres of meadowland and forest.

Since time immemorial, the members of the Confederated Tribes of Grand Ronde lived in their traditional territories, which extended over 20 million acres from the Columbia River to the Klamath River, and from the crest of the Coast Range to the crest of the Cascade Range. Their territory included Powell Butte.

Before the turn of the century, the large meadow area was cleared and an orchard planted by the first settlers. In 1925 the City of Portland purchased the land from George Wilson for future water reservoirs, but continued to lease the northeast portion of the property to Henry Anderegg, a farmer and owner of Meadowland Crest Dairy, until 1948 when the farming was discontinued. However, dairy cattle were permitted to graze on the acreage to preserve the pastures. In the mid-1970s, the Water Bureau prepared a development plan for Powell Butte that called for the construction of four 50-million gallon underground reservoirs to be located at the north end of the butte. In 1981, the first reservoir was built. A second 50-million gallon underground reservoir was constructed in 2014. These reservoirs serve as the hub of the Water Bureau's distribution system.

In 1987, the City officially established Powell Butte as a nature park and the park was opened to the public in 1990. The nature park is managed by Portland Parks & Recreation.