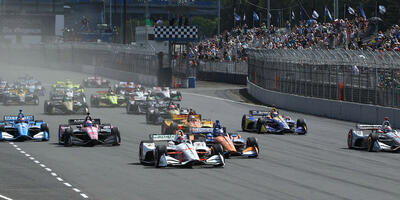 Go to www.portlandraceway.com for full facility and event details.

Businesses, non-profit organizations, and individuals are invited to form public-private agreements to carry out revenue-generating and capital-related activities supporting Portland International Raceway's goal to provide a "World Class Racetrack." The intrinsic value of what PIR offers potential partners is greatly enhanced by the large numbers of visitors it attracts that have an affinity for motorsports, cycling, and related recreational activities. PIR holds approximately 650 events per year and attracts over 400,000 visitors annually. For more information on PIR, go to Portland International Raceway.

PIR has prioritized the following projects:

Project Summary
PIR has 11.5 acres of land, which it believes would be suitable for an RV park catering to families and recreational visitors. The area is a shade tree, park-like setting that would be quiet at night yet be accessible to I-5 and a MAX station. The facility is spacious enough to retain an upscale, family-friendly appearance. Since, by law, RV sites must all be within 500 feet of the restrooms, the RV park would need to have a service building that is centrally located. The RV park would need to be designed for large rigs to navigate in and out of, have sufficient space between sites as to provide good comfort and minimize conflicts, be family-friendly, and establish itself at a high price point to encourage shorter stays. It is expected that the site will be developed with other amenities common to the better RV parks in the region such as a playground, a pet area, picnic area, and landscaping. There would be a single building containing a registration area, maintenance room, mechanical room, storage area, showers, bathrooms, laundry, and vending machines.

In 2004, PIR obtained approval for a Master Plan for the PIR property from the City of Portland; this plan gives it a blueprint for the 10-year development and management of the site.

Market Overview
The supply of recreation-oriented RV parks in the Portland area, and especially places convenient to public transportation and downtown, is tight. The high price of developable land is a major cause of the shortage of good quality RV parks. Furthermore, permanent residents seeking reasonably priced housing and workers attracted to Portland by the construction boom, who need good housing for a year or so, are occupying many sites in area RV parks that would otherwise be available for tourists. As such, there are few quality transient RV sites for recreational visitors.

Undoubtedly, an RV park will attract many tourists using RVs that would relish the opportunity to stay at PIR, which attracts nearly 120,000 visitors a year from beyond the
immediate region. In addition, with over 127,000 vehicles a day passing by PIR on I-5, many non-motor sport RV tourists would also be inclined to stay given the facility's proximity to the City and access to the MAX. Thus, a park-like, family-friendly park at PIR with competitive features, security, easy access to light rail, and operated to appeal more to vacationing patrons rather than long-term residents would achieve high occupancy rates if well managed and marketed.

Other capital improvements or services that enhance the visitor experience will also be considered.

Please review the details of the project(s), then submit your PIR Expression of Interest using the online form.

Background Information
The relevant economy that impacts PIR is the Portland-Vancouver-Beaverton metropolitan statistical area (MSA). It consists of seven counties. Five are in Oregon: Clackamas, Columbia, Multnomah, Washington, and Yamhill - and two are in Washington state: Clark and Skamania. A survey conducted by ECONorthwest in November 2005 revealed that about 72% of the visitors to PIR come from the MSA, of which only 22% are from Portland itself. For this reason, the economic outlook for the MSA best indicates the prospects for the proposed projects.

The forecast suggests that this region will see substantial gains in the number of new households, particularly outside of the City, in conjunction with real income growth. Both of these elements are particularly favorable for the developments at PIR.

Within the next five years, the number of households will increase by 57,870. Less than 24% of that growth will occur in Multnomah County. More importantly for the amenities proposed for PIR, household growth will be concentrated in the upper-income ranks. While the number of lower-income households is projected to fall by 8,621 between 2007 and 2012, the number earning over $70,000 a year is projected to climb by 57,870. Although some of the predicted increase would be driven by inflation, most are expected to arise from real wage and income gains.

Project Summary
Indoor kart racing is a competitive activity using racing karts that operate at speeds up to 40 miles per hour. Most facilities use gas powered karts. PIR is especially interested in ideas for electric-powered karts. The tracks are usually about 1,000 feet in length with many turns. The facilities use electronic timers and remote switches. They typically handle up to twenty racers at a time with races running about fifteen minutes. The interiors are designed to create an alternative reality so that guests are enveloped with the racing experience. These facilities often have a quick service restaurant or snack bar, meeting rooms, and a bar. The indoor karting facility envisioned for PIR would be different than the typical amusement park track, which uses slower moving karts that are designed for inexperienced drivers engaged in noncompetitive recreational driving. An indoor electric karting facility at PIR would attract a natural audience.

There are about 150,000 active go-kart racers in the United States. The prospect of operating an indoor track right near PIR has three key appeals to investors:

While PIR does attract many motorsports patrons and is convenient to families, these arrive-and-drive patrons would be price sensitive - and kart racing is expensive. For this concept to succeed, it would have to attract large numbers of corporate, group, and meeting clients. Therefore, the facility must have conference space and a bar/restaurant. The design and appearance of the facility must be conducive to stimulating sales to business groups. It cannot be arcade-like because child-toting families simply would not produce enough revenue to cover the high upfront costs of an indoor karting track. It is important to note that similar facilities in southern California, Boston, and Seattle capture 70,000 to 100,000 customers per year.

In 2004, PIR obtained an approved Master Plan for the PIR property from the City of Portland this plan gives it a blueprint for 10-year development and management of the site. It is important to note that the Indoor kart racing facility was NOT included in the Master Plan, so the proposer will be responsible for obtaining the required City planning and building approvals and permits. A review of the masterplan does not indicate substantial land use issues on the site.

Project Summary
There is a need for commercial space for businesses at PIR that provide repair and supply services to the racing public and, to a lesser degree, spectators. In 2004, PIR obtained an approved Master Plan for the PIR property from the City of Portland and this plan gives it a blueprint for 10-year development and management of the site. It is important to note that 20,000 square feet of commercial buildings were included in the plan.

The small businesses that would likely occupy commercial space at PIR would be those that specialize in providing services to the owners of racing vehicles that currently use the track. These include historic cars, racecars, motorcycles, racing bicycles, and experimental electric vehicles. The types of businesses that would likely locate next to PIR will fill the racing niche with highly specialized equipment and services not otherwise readily available. The intent would be to allow the market to determine what would be most desirable and successful.  Currently, participants have to travel to suppliers and service providers throughout the metropolitan area and beyond, which is both wasteful and inconvenient.

Undoubtedly, as discovered from the November 2005 survey of 517 PIR visitors that showed nearly a third of visitor spending was on automotive supplies and services, there is a large market to tap for entrepreneurs interested in catering to the needs of racing participants. Generally, one should anticipate small establishments, with fewer than ten employees each, that provide highly specialized goods and services would choose to locate at the PIR commercial development. In addition, one or two businesses serving the general public may also find the development attractive. Examples of potential businesses are:

Other commercial tracks around the country encourage the development of motorsports business clusters as a means to stimulate more interest in their facilities, improve the amenity value of their operations, and stimulate the local economy.

Project Summary
Currently, people who race vehicles at PIR have to haul them between the track and home. By having garages at PIR, which enthusiasts could rent, the track could generate revenue for itself, lessen traffic to and from the track, and save participants time and hassle. The concept ranges from simple garages meant only for secure vehicle storage to elaborate lofts with fully equipped ground floor shops with suites above that have kitchen facilities, full bathrooms, sleeping areas, concierge services, and balconies overlooking the track.

Prices depend on the size of the garage, location of the track, and the time rented. At Thunderhill Raceway in Willows, California, which is the nearest track south of Portland, you can pay $100 to $250 a day on a busy weekend, but as little as $300 for a whole week and $150 a month during the off-season. They have 20 garages.

In 2004, PIR obtained approval for a Master Plan for the PIR property from the City of Portland. This plan gives it a blueprint for 10-year development and management of the site. Included in this plan was the approval of the development of racing garages.

PIR is also interested in having a private partner build a new grandstand with both simple garages or garage suites integrated into the design. The developer would finance the construction of the garages and the City would participate in financing the grandstand construction.

In 1965, Portland International Raceway was built on the site of Vanport City, which was destroyed by a flood in 1948. Prior to its destruction, Vanport was the second largest city in Oregon. Vanport was constructed in 1942 to house the thousands of war-time shipbuilders that Henry Kaiser, of Henry Kaiser Industries, had recruited from New York to help with the war effort. Vanport, which was constructed in under a year, was deemed 'The Miracle City.' It had its own post office, nine schools, a fire station, a 400-seat cafeteria, a 785-seat theater, a library, a hospital, fourteen playgrounds, five commercial centers, and a police station staffed by 22 officers.

The problem with this instant city was that the quality of housing and building construction left much to be desired. On Sunday, May 30, 1948, just one day after the general manager of Vanport announced that the city was "not in any foreseeable danger" from rising flood waters, a segment of the ring-like dike surrounding the city collapsed. A 12-foot wall of water rushed through the community, wiping out all of the poorly-constructed houses. The residents were never officially notified that they were in danger. 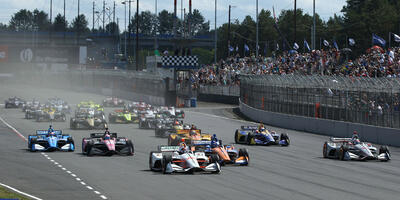 Go to www.portlandraceway.com for full facility and event details.