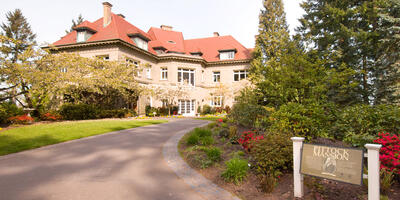 Hours of operation, admission fees, and other information

Park road gates lock at 9:00pm nightly. All vehicles must be removed by 9:00pm.

Once the private home of the Portland pioneer Pittock family, this 22-room house was designed by architect Edward Foulkes and completed in 1914. The mansion sits 1,000 feet above sea level on 46 acres and commands a view of five mountains in the Cascade Range. It is an outstanding architectural achievement with its eclectic design of circular rooms, combining fine plasterwork, cut and polished marbles, cast bronze, and superbly crafted hardwoods and paneling. Its progressive features included a central vacuum system, intercoms, and indirect lighting hidden in alcoves above the walls. The house is completely furnished with antique furniture and objets d'art, including family artifacts, appropriate to its 17th, 18th, and 19th century French and English designs.

Henry Lewis Pittock was a vigorous outdoorsman, and was a member of the first party to climb Mt Hood. He was a consummate businessman, and took ownership of the weekly Oregonian in 1860, the same year he married 15-year-old Georgiana Martin Burton of Missouri, only seven years after arriving on the wagon train from Pennsylvania. He went on to build an empire incorporating real estate, banking, railroads, steamboats, sheep ranching, silver mining, and a pulp and paper industry.

Georgiana loved gardening and kept a terraced flower garden filled with many kinds of flowers. She started the tradition of Portland's annual Rose Festival. In the community, she dedicated herself to the lives of woman and children. She helped found the Ladies Relief Society in 1867 and played a key role in building the Martha Washington home for single working women.

The couple lived there with their family from 1914 until the death of Georgiana in 1918 and Henry in 1919. The house remained as a family residence until 1958. Six years later, the City of Portland purchased the estate for $225,000. It was opened to the public one year later and has remained a community landmark ever since.