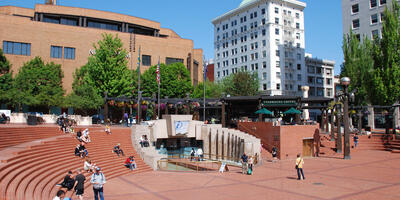 Visit thesquarepdx.org for all current information, events, and activities in #TheSquarePDX

Since its creation in 1984, Pioneer Courthouse Square has been affectionately known as Portland’s “Living Room”. The Square, a 40,006 square foot urban park located at the heart of the downtown core, has been a public gathering space for the benefit of Portland’s community members and visitors since its grand opening in 1984.  The Square hosts more than 300 programmed events each year that reflect the civic role of the Square within the community.

The block has a rich history as the site of a City school (1856 Central School), the 1890 Portland Hotel, and a former two-story parking lot in 1951.  The archway and gatework from the Portland Hotel are still part of the Square.  Pioneer Courthouse Square’s visionary design was the result of a national design competition and received an Architectural Design Citation from Progressive Architecture magazine in 1981.  The vision has endured to become Portland’s greatest testament to the strength and endurance of its civic will.  The original construction of the Square was in part funded by “Friends of Pioneer Square” with inscribed bricks.

There are also several significant art pieces in the Square including:

If you have questions about your brick or would like to buy a new brick, please call 503-223-1613 or visit thesquarepdx.org/bricks.

With over ten million visitors annually, Pioneer Courthouse Square is one of the most visited public sites in Oregon.  After thirty years of community enjoyment, the Square was in need of significant repair and renovation to address the failing waterproof membrane, the deteriorated brick plaza, structural failures, and stoa column repairs, as well as restroom upgrades for safety and accessibility. The membrane under the brick pavers was originally rated to last only twenty years and had reached a state of near-failure after thirty years, leading to water intrusion and increasing leaks.

In 2014, the Portland community voted to support the Parks Replacement Bond, a measure that resulted in up to $68 million in general obligation bonds. Bond funds are paying for the capital costs of repairs and improvements to existing park facilities. Parks outreach identified strong community support for prioritizing restoration of Pioneer Courthouse Square, the much loved City’s “living room”. Due to a small part of this project (restroom expansion) being eligible for System Development Charge funding, the Parks SDC fund contributed $150,000.

The 2014 Parks Replacement Bond included a not-to-exceed allocation of $10 million for all phases and costs associated with the renovation project at the Square including:

Portland Parks & Recreation, with its partner, Pioneer Courthouse Square, Inc., has worked to ensure the project:

The block was originally bought in 1849 by Elijah Hill, a shoemaker. He paid $24 and a pair of boots. Later the Portland School Board purchased the site and opened Central School, Portland's first real schoolhouse, in 1858. It was moved to an adjoining street in 1883 to make way for the Portland Hotel which occupied the site from 1890-1951. The elegant hotel was torn down and for the next 30 years the site was a parking lot. In 1979, the City acquired the block from Meier & Frank Company who donated $500,000 toward creating an open space. In 1980, a national design competition was held to select a design team. The winning team was led by Portland architect Will Martin, who died in a plane crash not long after the square was dedicated. Located across from its namesake, the historic Pioneer Courthouse, Pioneer Courthouse Square officially opened April 6, 1984, sharing Portland's 133rd birthday.

The Square's features include the Waterfall Fountain, built of granite; sixteen columns with classical pillars topped with carved yellow roses on which crawl pink-and-green spotted bugs; and two brick amphitheaters which provide seats for events. Other pieces of artwork include J. Seward Johnson's Allow Me, a bronze statue of a man holding an umbrella. A signpost lets visitors know how far they would have to travel and in which direction to reach sights such as Walden Pond or Moscow's Red Square. And every noon, the Weather Machine performs, forecasting upcoming weather by displaying one of three metal figures amid a show of mist and flashing lights. Helia, a golden sun, indicates a clear, sunny day; Blue Heron predicts mist, drizzle, and changeable weather; and fierce, open-mouthed Dragon forecasts storms. This whimsical machine also tells the temperature.

In 2017, Pioneer Courthouse Square received major renovations with funding from the 2014 Parks Replacement Bond. Improvements included replacement of the failing waterproof membrane and deteriorated bricks, installation of a new HVAC system and other renovations to the office spaces under the Square, repairs to the stoa columns, and construction of a new all-user public restroom thanks to a small contribution from System Development Charges. 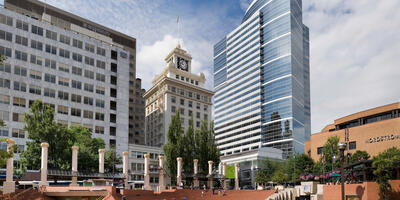 SW Broadway and Yamhill Street
Portland, OR 97205
Get Directions