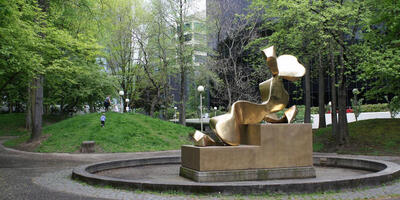 A project of the Halprin Landscape Conservancy

Francis W. Pettygrove was one of the early owners and developers of the Portland townsite. He was the winner of the historic coin toss with Asa Lovejoy which determined the name of the city that they founded. Pettygrove, from Portland, Maine, was the owner of Portland's first house, wharf, warehouse, and store.

In 1979, the Portland Development Commission installed Manuel Izquierdo's muntz bronze sculpture of a reclining woman, The Dreamer. Izquierdo, professor emeritus of Pacific Northwest College of Art, said that his sculpture "speaks of hope, of beauty and serenity, of love, and for a better life in our midst." He filled the sculpture with foam so that falling rain would make a gentle sound like a kettledrum rather than the ringing it would make if hollow.

SW 1st to 4th Avenue - Market to Harrison Street
Portland, OR 97204
Get Directions