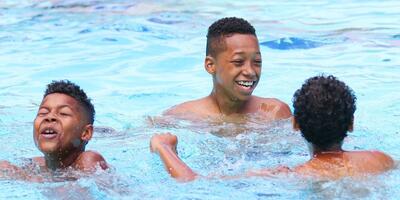 Peninsula Outdoor Pool is closed for the season.
On this Page

Thank you for a great summer 2022 season!

Swimming Pools and Lessons - this link will take you to our PP&R Swimming Pools page where you can find more information about fees, policies, swim lesson descriptions, and more.

Peninsula Pool was built to fill the need created by the Willamette River bath house closures, which were required due to increasing river pollution. As popular as the pool is with people, it also has a history of being enjoyed by Humboldt penguins.

In 1957, when the penguins were scheduled to make their debut at the Washington Park Zoo, the zoo's penguin facilities were not yet finished when the birds arrived from Antarctica. Peninsula Pool was used as a holding area until their own space was ready. In 1998, two ceramic tile murals created by artist George Johanson were installed on the south wall overlooking the pool deck. These colorful murals depict people enjoying the water at the beach and at a pool.

In 2018-19, thanks to funding from the Parks Replacement Bond and System Development Charges, Peninsula Pool underwent a major renovation. Improvements included an expanded shallow area for beginning swimmers that increased the pool’s capacity, pool and deck lighting, new deck-level gutters, drainage and circulation systems, a high-efficiency filtration system, new  pumps, a new building on the deck to house the pool mechanical systems, and a new ADA lift and other ADA improvements.