When a new home or commercial development is built in Portland, we need to expand the park system to meet the needs of a growing population. Collecting SDCs from development helps to pay for that park system growth.

The Parks SDC program has two ‘Sub-Areas’, Central City and Non-Central City. A portion of the fees collected in each sub-area needs to stay in that sub-area to provide more local park experiences (like typical neighborhood parks), and a portion can be spent on park experiences that serve a more citywide function (like regional trails, natural areas, etc.)

The following charts and map are summaries of SDC program revenues and expenditures from fiscal year 1998-1999 through 2020-2021. 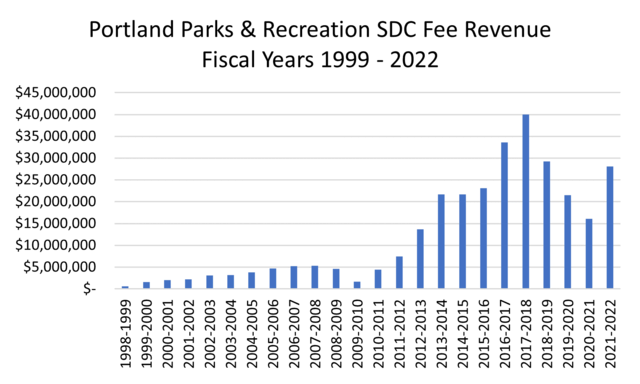 This summary of capital expenditures from the SDC fund shows actual expenditures by fiscal year, and does not include dollars that have been allocated to projects, but not yet spent.

This summary does not include other funding streams like the 2014 Park Replacement Bond, major maintenance, and other partnerships/donations. It is through a combination of these funding mechanisms (and with their individual constraints) that we maintain and grow the park system.

The Parks SDC fee is indexed annually, with updated fees taking effect on July 1. Park SDC fees will be increasing by 4.92% on July 1, 2022. The fee update methodology is specified in the Parks SDC Code.

Beginning July 1, 2018, Portland Parks & Recreation and the Portland Bureau of Transportation will assess development fees for additions to residential units by the amount of square footage in each structure.

Use this Bureau of Development Services Online Fee Estimator to calculate your SDC fees.

Please contact the Parks SDC Program with any further questions.

As required by ORS 223.309 Portland Parks & Recreation maintains a list of capacity-increasing projects intended to address the need created by growth. These projects are eligible to be funded with Park SDC revenue.