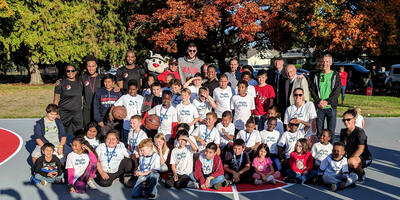 The currently developed 5-acre portion of Parklane Park includes an accessible play area, a basketball court, a Portland Loo, and a softball field. Construction will begin in Spring 2023 on a 20-acre expansion.
On this Page

Thanks to funding from System Development Charges, Parklane Park will be expanded from 5 acres to 25 acres. Construction of the full park is expected to start in Spring 2023, with completion in Fall 2024. All the landscape areas, including soccer fields and dog off-leash areas, will likely need to remain closed until the seed becomes fully established by Summer 2025. Learn more.

In 1873, Francis Elliott claimed 640 acres through the Donation Land Claim Act that included the land the park is built on. The area was comprised of small family farms and orchards. The park site itself was vacant pasture land with some Douglas fir stands. At that time the road to Sandy traversed the Elliott family's property. When they eventually platted their land, they were required to dedicate a right-of-way which passed through the site where the gravel path exists today.

In the 1940s, Henry Troh opened a small airport called Troh’s Skypark on the current-day park site. The airport closed in the 1950s and was replaced by a sand and gravel quarry owned by the Oregon Asphaltic Paving Company. Gravel from the site helped to build the surrounding neighborhood. By 1984 the excavation reached the water table, and groundwater filled the quarry. The quarry was filled in the 1990s, largely with material excavated in the surrounding neighborhoods.

When the surrounding subdivisions were built in the 1970s, the triangular parcel that is now Parklane Park, become a Multnomah County park. Local residents planted many of the trees, and installed red and white striped playground equipment, giving the park its nickname, Candy Cane Park. In 1993, the City of Portland acquired the park from Multnomah County. The 1996 Centennial Neighborhood Plan recommended acquisition of 20 acres to the north, the site of the former gravel quarry. In 2001, the City purchased the three additional parcels from the Oregon Asphaltic Paving Company.

In 2016, a Portland Loo was installed with funding from the 2014 Parks Replacement Bond.

SE 155th Avenue and Main Street
Portland, OR 97233
Get Directions

Parklane Park to get $6M towards further improvements