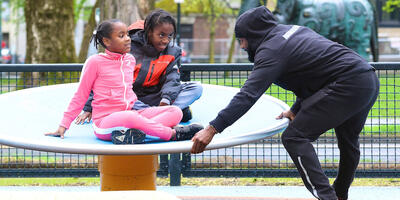 Thanks to the voter-supported Parks Replacement Bond, this project replaced the aging play structures at the North Park Blocks playground. The work included a new accessible play surface and pathway improvements.

These blocks were some of the original park properties in the city. Captain John Couch dedicated the blocks to the City in 1869. City plats show the park blocks continuing to Front Street, but Tanner Creek and poor drainage were obstacles to development and land north of Glisan remained vacant. The original design concept for the North Park Blocks was for a continuation of the South Park Blocks promenade. However, the linking was impeded early on by Benjamin Stark's reluctance to give the city the two blocks between Ankeny and Stark. The six blocks between Salmon and Stark donated by Daniel Lownsdale became part of a legal battle with his second wife's heirs. The court ruled in their favor and the property was eventually sold and developed. On the remaining blocks, trees were planted in rows like those in the South Park Blocks, using Big leaf maples and Black locusts with American elms at the street edge.

By the 1880s, the area was predominantly residential, but not fashionable like the South Park Blocks. Modest one- and two-story houses were built. From the turn of the century, more commercial and light industrial businesses and residential hotels were developed in the area. The railroad purchased the land north of Park to Front and expanded its rail yards.

In 1908, the People's Institute operated a playground and welfare program in the North Park Blocks. The next year the Park Commission added play equipment and took over. This became the Portland's first supervised playground, separating the boys from the girls. It became popular citywide. In 1920, tennis courts were built in the northernmost block and play areas were developed between Everett and Glisan. Also built around this time were two brick restrooms in the Ankeny block. As more playgrounds were developed in other parks, and commercial and industrial uses pushed out residential use, the park began to decline. Many large trees were damaged in the 1962 Columbus Day storm and were removed, changing the character of the park.

In 1992, a series of improvements was completed in the North Parks Blocks. Pains were taken to protect and preserve the remaining historic trees that had stood there since the park's inception. Light fixtures were replaced with the same style of ornamental ones now in the South Park Blocks. Different colored paving stones were used on the pathways to create bright, winding lanes. In 1993, a new playground was built and its popularity brought some vitality back to the park.

In October 2002, a 12-foot bronze sculpture was installed between Burnside and Couch streets. Based on a wine pitcher from the late Shang Dynasty (circa 1200-1100 BC), this sculpture is about sixteen times larger than the original. The young elephant standing peacefully on his father's back symbolizes safe and prosperous offspring. The elaborate surface decoration features cloud-shaped curves and birds and animals from ancient Chinese mythology. The piece is titled Da Tung & Xi'an Bao Bao. Da Tung may be translated as "universal peace" or "large bronze." Xi'an Bao Bao means "baby elephant." The sculpture was a gift to the city from Chinese businessman Huo Baozhu, whose foundry in Xi'an, China, is licensed by the national government to reproduce Chinese antiquities. Huo, who visited Portland a number of times, said he was motivated by a love of Chinese history and admiration for Portland.

In February 2005, a fountain designed by the famous weimaraner dog photographer William Wegman was installed between Davis and Everett streets. Dog Bowl measures 8x10 feet with checkerboard black and white granite tiles to resemble a patch of linoleum kitchen floor; four of the squares are artificial turf. Wegman designed the cast-bronze dog bowl, with water burbling up from an underground source, to be reminiscent of the Benson bubbler drinking fountains placed around town in 1912 by philanthropist Simon Benson.

In 2019, the North Park Block’s playground was fully renovated, including the addition of new accessibility features, thanks to funds from the 2014 Parks Replacement Bond.

NW Park Avenue from Ankeny Street to Glisan Street
Portland, OR 97209
Get Directions