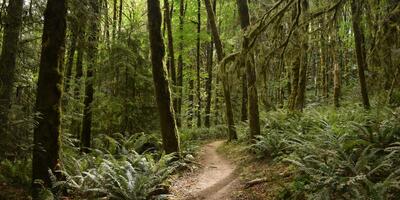 Portland Parks & Recreation has developed a Natural Area Acquisition Strategy to guide completion of a connected system of natural areas in Portland.
On this page

Portland Parks & Recreation has developed a Natural Area Acquisition Strategy to guide completion of a connected system of natural areas in Portland.

This April, we celebrated the completion of the Foster Floodplain Natural Area.  Since then, it’s been getting a lot of attention.  On August 24, more than 20 local environmental professionals, college professors, students, and government agency staff joined the Bureau of Environmental Services, Portland Parks & Recreation, and Otak on a tour of the site.  The tour was hosted in partnership with the Northwest Chapter of the Society for Ecological Restoration as part of their Restoration Walk series, which aims to foster interdisciplinary discussion and information sharing among ecological restoration practitioners.

Tour participants learned about this significant project and lessons that can be applied in other communities.  It’s a great example of using green infrastructure (our city’s streams, trees, wetlands, rain gardens and green streets) to solve a lot of problems at once.  The natural resources at Foster Floodplain work to reduce flooding on Foster Road, improve water quality, and provide wildlife habitat.

PP&R's acquisition program focuses on buying land from willing sellers, however, we do accept nominations from everyone. Do you know of a great habitat site that we should consider for acquisition? Submit a site nomination form.

Portland Parks & Recreation’s natural areas are home to a wide diversity of wildlife, including six different species of owls. One owl species that you may encounter is the barred owl, which has been observed in Forest Park, Gabriel Park, Hoyt Arboretum, Oaks Bottom and River View Natural Area.

Part of PP&R’s mission is to protect these wild neighbors in our urban landscape. Recognizing, understanding, and taking action to ensure positive interactions will help to protect wildlife in our parks. Barred owls are beautiful examples of predatory birds in Pacific Northwest forests and ecosystems; a sighting can be a great experience for an outdoor enthusiast.

What should you do if an owl is acting aggressively?
As visitors to parks and other forest environments, we are willingly entering wildlife habitat areas. While it is intimidating to see aggressive owl behavior, injuries from barred owl attacks are very rare. Following these simple suggestions will help ensure that encounters will be positive for both barred owls and visitors alike.

Life History
Barred owls populate wooded forests. They typically roost unnoticed during the daytime, though occasionally will hoot with a distinctive call described as sounding like ‘Who-cooks-for-you, who-cooks-for-you-all?’. At night they hunt small rodents, birds, and reptiles, often perching on a favorite tree before sighting prey. Like all owls, they swallow their food whole, regurgitating a pellet with the indigestible parts of their meal. Barred owls have few predators, notably raccoons and weasels which will raid their nests and great horned owls which will occasionally kill adult or juvenile barred owls.

Barred owls are solitary outside of breeding season (February to August). When that time arises, female and male owls will call out to each other, and perform a courtship “dance” that consists of rhythmic bobbing and the spreading of wings. Once a mate has been found, the paired owls typically remain together for future breeding seasons. Barred owls nest in tree cavities or take over large stick nests built by crows and other birds. The female owl will lay 2-4 eggs and sits on the eggs while the male hunts during the month-long incubation period. Though able to fly around six weeks, young owlets can remain with their parents for up to six months.

Barred owls are native to eastern North America, moving westward over the past century. The first barred owls arrived in British Columbia in 1959 and were first documented in Oregon in the mid-1970s (see figure one.)

The smaller spotted owl is native to the Pacific Northwest and utilizes a variety of habitat types for its needs. However, it is often considered a ‘specialist’ because of its preference for older forest stand characteristics (particularly when breeding), such as dense canopy closure, standing snags, and living trees with broken tops. Barred owls are 'generalists' in nature, meaning they have fewer specific habitat requirements and can occupy a wider variety of habitat types. Spotted owls are listed as threatened under the Endangered Species Act due to a decline in their habitat. Additionally, barred owls encroach upon and reside in spotted owl habitats, further contributing to spotted owl decline. In areas with established barred owl populations, spotted owl populations have been recorded to decline more dramatically the longer barred owls are present.

There are conflicting views surrounding the management of barred owl populations. The US Fish and Wildlife Service has issued permits allowing limited lethal control on an experimental basis in a small number of areas where spotted owls are established; however, barred owls are protected under federal law, and harming or killing them without a permit from the US Fish and Wildlife Service is illegal and can result in a jail sentence of up to 6 months and/or a fine of up to $15,000. Portland Parks & Recreation treats barred owls just as it would treat any other protected species.

Territorial Behaviors
Barred owls are territorial year-round, though it is hypothesized that this behavior increases during the breeding season and when young owls are establishing new territory. When a barred owl’s territory is threatened, it will swoop towards the intruder and hoot loudly to chase them away. Additionally, when the adults are protecting a nest during the breeding season, one owl may hoot and put on a display to distract the possible predator from the nest while the other remains with the eggs.

Barred owls have occasionally attacked runners, swooping down and hitting them on the head or neck with their talons. This is very rare, and has only been noted recently in nature areas in the Pacific Northwest, including Salem, Portland, and the Seattle area.