Effective July 28, 2021, Portland CAO Tom Rinehart has issued a directive mandating the use of face coverings for everyone inside City facilities and vehicles. Check our face coverings page for more information.

Face coverings are required at all times when inside city-owned facilities. To protect our community from the spread of COVID-19, PP&R is following guidance from public health authorities and elected officials. For detailed information, please visit portland.gov/parks/covid-19-updates.

Information
Browse the content below to learn more about our No Ivy League work.
On this page

Why We Remove Ivy from Natural Areas

Forest Park is one of America's largest urban forests. Set aside as a natural area within Portland's city limits, its 5,000+ acres are host to over 70 miles of hiking trails and bicycle paths. This natural area provides an unsurpassed opportunities to connect with the forest environment. However, our treasured resource faces a challenge experienced by many natural areas around the globe. Not only are humans changing the physical, chemical, and climactic structure of these ecosystems but we are responsible for the introduction of organisms previously not present. In the Pacific Northwest (PNW) one such organisms is the plant English ivy (Hedera spp.)

Members of the Hedera genus have long been admired by humans in their historic range throughout Eurasia, Northern Africa, and Macaronesia. The hardiness of these evergreen plants, their tightly weaved vines and intimate relationship with trees led them to become a symbol of vitality and fidelity in Western culture. It is because of this rich cultural significance that we humans have taken ivy, and many other organisms,  with us to new lands. The prevalence of Hedera spp. in the PNW is thought to be primarily due to escape from horticultural uses.

Evidence suggests that modern ivy's relatives have been present throughout regions of Western Eurasia and Northern Africa for more than 1 million years [1]. In this time ivy evolved to fill the unique ecological niche of a liana, a climbing plant dependent on a host for support. Important to these ecosystems, ivy plays an role in nutrient cycling, soil erosion reduction, and animal forage [2]. Ivy is highly plastic plant that can grow in a variety of light conditions, soil types and water levels - allowing it to rapidly recolonize disturbed areas as well as succeed in dense forests. The characteristics that make ivy a successful part of its native ecosystems have also made it a successful transplant in the PNW, though its success may be at the cost of our own native species.

English ivy has been observed to dominate the understory of PNW forests, especially in disturbed areas and edge habitat. In these areas the juvenile phase of ivy forms a thick mat of vines and climbs any available surface. This thick mat of vines may prevent significant amounts of light from reaching the forest floor and thus alter the species composition in these areas[3]. As the liana climbs it can reach below the crown of its host tree. A physiological change occurs when the juvenile form receives enough light and resources, transitioning to a mature form that spirals outward from the trunk of its host tree. Through this process ivy may further alter the composition of light reaching the forest below and in extreme cases from the host tree itself. The mature form of ivy is able to produce berries and distribute seeds, with the help of birds, expanding across a greater range than by vegetative growth alone.

Recent studies of ivy populations in the PNW have determined that the most prevalent species is Hedera hibernica (83% of 119 populations sampled) and not Hedera helix as was previously thought [4]. These species are closely related but differ in their ploidy, the number of duplicate sets of chromosomes, H. helix containing 2 sets (diploid) and H. hibernica containing 4 sets (tetraploid) [5] This distinction could be important for understanding why H. hibernica has been more successful in the PNW, but has not yet been explored in depth. H. helix includes over 400 cultivars with only a few identified as species of concern in the PNW including H. helix "Star", "Pittsburgh", and "California."

The efforts of the No Ivy League focus primarily on removing mature English ivy from trees in Portland's natural areas to reduce seed distribution and prevent possible damage to mature trees. In a number of areas the No Ivy League also removes substantial amounts of ground ivy in conjunction with non-native shrub removal and native plantings. This work aims to restore the plant community present before the introduction of species such as Hedera L. The No Ivy League uses hand removal exclusively throughout Forest Park and other natural areas. Though chemical and mechanical removal can be effective in the appropriate situation the No Ivy League uses hand removal techniques to provide the experience of stewardship to a wider audience than other methods would allow.

-3: This idea has not been the focus of specific research yet but could be reasonable. Seeds sense the ratio of red and far-red light to determine if they are shaded or not and thus whether they will face competition if they germinate. Notoriously shade tolerant, ivy could be altering the red/far red light ratio found beneath the mat and influencing the germination of the local seed bank. If you are interested in exploring this idea please contact us.

Girdle - The most basic technique to stop tree-climbing ivy dead in its tracks.
Once you have located a tree with ivy, use either loppers or a pruning saw to cut through each vine clinging to the tree trunk at shoulder height and at ankle height. This severs the connection between the life sustaining roots and the rest of the ivy. Be sure to cut ALL vines as even one can continue to nourish ivy higher up the tree. Strip the Ivy away from the tree between the two cuts - some vines can be so big that you need to pry them away from the tree - just be careful not to damage the bark. Toss the stripped section of vine or save one or more as a trophy - how will your friends believe that you cut away a vine as big as your arm without the proof? Recheck the 'girdled' area for any thin vines which may have grown under the tree's bark and you're finished. But, after all that work, you don't want to give ivy a head start by leaving it to grow next to the base of the tree.

Full Lifesaver - After girdling the ivy from a tree, work to clear the surrounding ground ivy
Imagine a 6-foot radius circle around the target tree, begin by peeling back the ivy mat 6 feet from the tree and thoroughly pulling every vine and root from the circle. You may also find it helpful to cut "lines" in the ivy mat within your imaginary circle and rip out ivy like a piece of pie. Cutting "lines" in the dense mat allows for precision removal around delicate plants and immovable obstacles. You will save more time and energy pulling around rather than through these obstacles. If you are working on a slope, pull downhill and let gravity work with you and  The keys to an effective Lifesaver are consistency and patience; all vines and roots must be removed.

Log Roll - This method is most effective in areas with extensive ground ivy. When used properly "Log Rolls" can be quite efficient and gratifying.
Begin by designating the area to be log rolled (a hillside or group of infested trees). Mark the top perimeter by cutting a line in the ivy mat, pulling apart each side of the mat as you go. If you are on a slope, cut horizontally across the slope to allow the ivy mat to be pulled downhill. Start to lift the mat and pull the cut edge of the vines downhill, rolling the ivy mat over itself. Let gravity do most of the work but also be aware of your surroundings unless you regularly perform backwards somersaults. Scan for native plants that may make rolling difficult and cut a line in the ivy perpendicular to your pulling edge so that the vine mat can be pulled around; this saves native plants that might otherwise have been uprooted by the thick mat and makes the log roll much more manageable. If you find yourself with a stuck roll, proceed to divide the "log" into several pieces and slice out the remaining perimeter. Once you have accumulated a few large ivy logs they must be mulched to ensure the ivy does not re-root.

Tonchi's Mulching Method- An organized approach to hand mulching pulled ivy.
Transportation of removed ivy away from the removal site is not always practical nor desirable. Mulching ivy and spreading it back onto the removed area seems to be an effective solution but mulching can be time consuming and tiring unless well organized. While removing ivy create manageable piles to be mulched; try not to exceed 2'x2'x1'. Start your piles on areas with no vegetation or recently cleared of ivy to prevent damage to other plants and ensure that no living ivy is buried below the pile. Begin by "cutting a line" through all of the vines about 6" from an edge, detaching a "slice" from the pile. Now cut that slice into smaller pieces by mulching perpendicular to the angle of the slice at intervals of ~3-4". Repeat until the entire pile has been divided then flip the mulched ivy and repeat again. Once the pile has been thoroughly mulched it is time to thinly spread the ivy bits back onto the areas of removal. Target areas most prone to erosion or those that have been most disturbed by ivy removal. Return in a few months to search for any root fragments that are now sprouting or any mulch that has re-rooted.

Take a look at the No Ivy League's assessment of ivy removal throughout Forest Park during its first decade. An invaluable resource for those looking to get an inside look at the ivy problem, the report provides a starting point for a multitude of valuable research projects as well. Sit back and enjoy.

The Know Ivy League: Expand your horizons with peer-reviewed journal articles on a diversity of topics.

The Dirty Thirty: The invasive Species of greatest concern in Forest Park:

City of Portland, Bureau of Environmental Services
BES provides a wealth of information and services regarding watershed and habitat management. Learn more about the City of Portland's Invasive Species Program

Community Watershed Stewardship Grants
Providing up to $12,000 to schools, churches, businesses, and other community organizations for projects that connect people with watersheds and protect and enhance watershed health.

The West Multnomah Soil & Water Conservation District
Many grant opportunities can be found through the WMSWCD, ranging from community projects to individual homeowners.

The Oregon Invasive Species Council
A great resource for information about current invasive species threats around Oregon. The invasive species reporting hotline can be reached at 866-468-2337.

No Ivy League Chapters and Other Ivy Removal Groups

Do you have an organization you think should be on this list? Tell us about it! 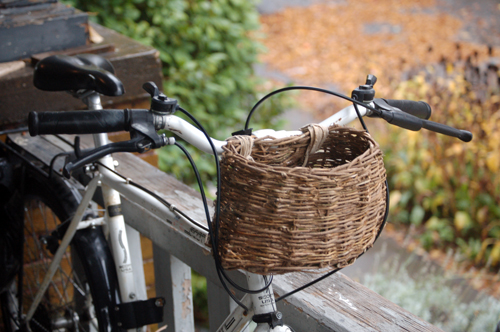 An excellent use of English Ivy vines after removal,
Urban Scout from the "rewild camp" program created this bike basket.

Are you passionate about the English ivy problem and want to do something about it, but can't find the time to help with efforts towards ivy's eradication? Please help us by donating your hard-earned money to fund our hard-working Summer Youth Crews. They do the most hardcore and gritty ivy removal and are indispensable. Please contact us!