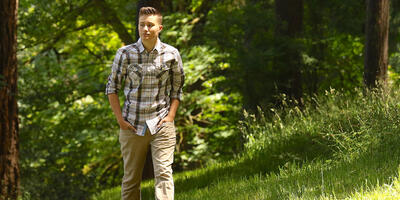 Renovation work is being planned for the Mt. Tabor Dog Off Leash Area to reduce erosion of the hillside. You may observe PP&R engineering staff onsite and see surveying marks in the area. We will update with a timeline for the work and what areas will be closed for construction once we have that information.

This park is maintained with the volunteer assistance of the Friends of Mt. Tabor Park. To find out how you can help at your neighborhood park, call 503-823-5121.

At the crest of the park is a bronze statue of Harvey W. Scott, editor of The Oregonian newspaper from 1865-1872 and from 1877 until his death in 1910. A gift to the city by Scott's widow, Margaret, and family, it was sculpted by Gutzon Borglum in the early 1930s while he was at work on his monumental sculpture of four American presidents on Mt. Rushmore in the Black Hills of South Dakota. Cast by the Kunst Foundry in New York, it was unveiled in June 1933 with great ceremony. 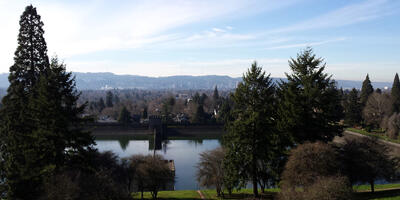 SE 60th Avenue and Salmon Street
Portland, OR 97215
Get Directions

The park is closed to motor vehicles all day Wednesday, and from 10:00pm to 5:00am all other days. The road gates at Salmon, Lincoln/Harrison, and Yamhill Streets will be closed during those times.

Pets not allowed within Mt. Tabor Amphitheater on days of concerts.

Construction started in October 2021, with expected completion in Summer 2023