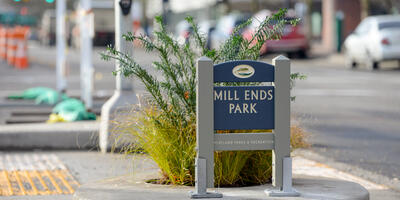 The smallest park in the world!

Mill Ends Park is a tiny urban park, consisting of one tree, located in the median strip of SW Naito Parkway in downtown Portland, Oregon. The park is a small circle 2 feet across, with a total area of 452 square inches (0.00007205784 acres). It is the smallest park in the world, according to the Guinness Book of Records, which first granted it this recognition in 1971.

In 1946, Dick Fagan returned from World War II to resume his journalistic career with the Oregon Journal. His office, on the second floor above Front Street (now Naito Parkway), gave him a view of not only the busy street, but also an unused hole in the median where a light pole was to be placed. When no pole arrived to fill in this hole, weeds took over the space. Fagan decided to take matters into his own hands and to plant flowers.

Fagan wrote a popular column called Mill Ends (rough, irregular pieces of lumber left over at lumber mills). He used this column to describe the park and the various "events" that occurred there. Fagan billed the space as the "World's Smallest Park." The park was dedicated on St. Patrick's Day in 1948 since Fagan was a good Irishman. He continued to write about activities in the park until he died in 1969. Many of his columns described the lives of a group of leprechauns, who established the "only leprechaun colony west of Ireland" in the park. Fagan claimed to be the only person who could see the head leprechaun, Patrick O'Toole. After Mill Ends officially became a city park on St. Patrick’s Day in 1976, the park continued to be the site of St. Patrick's Day festivities.

Over the years, contributions have been made to the park, such as a small swimming pool and diving board for butterflies, many statues, a miniature Ferris wheel (which was brought in by a normal-sized crane), and the occasional flying saucer. The events held at the park have included concerts by Clan Macleay Pipe Band, picnics, and rose plantings by the Junior Rose Festival Court.

The park had to be moved temporarily in 2006 for construction on Naito Parkway. It was replaced on March 16, 2007, in true St. Patrick's Day style with the Royal Rosarians, bagpipers, and the Fagan family, including Dick's wife Katherine, in attendance.

Again in December 2021, the substantial completion of the Portland Bureau of Transportation (PBOT) Better Naito Forever project resulted in a new and improved Mill Ends Park. The world-famous Mill Ends Park moved to a new location (a full six inches west from its previous location) as the City installed permanent bike, sidewalk improvements nearby. Naito Parkway is a critical transportation corridor for people walking, rolling, biking, and driving. Better Naito Forever has provided a permanent two-way bikeway and sidewalk along the west side of Waterfront Park. Part of the improvements for Mill Ends Park also included a new cloverleaf park border (legend has it the park is home to a family of leprechauns) and a new park sign. The bureau is hopeful park visitors can find the park in its new location without a map.

SW Naito Parkway and Taylor Street
Portland, OR 97204
Get Directions