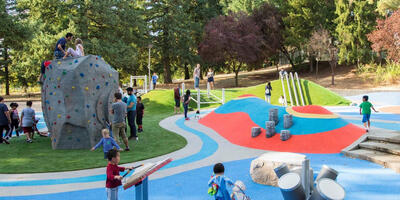 In November 2014, the Parks Replacement Bond was passed with overwhelming support by Portland voters, showing broad support for our City’s parks and recreation facilities. Bond funds are to be used for repair and replacement of the most urgent needs in our parks system. The initial bond project list included play area renovations and accessibility improvements at Lents Park’s playground. All improvements to the play area were in accordance with the 2011 Lents Park Master Plan.

Portland Parks & Recreation (PP&R) and Under Armour announced plans in early July 2015 to move forward with a significant partnership to enhance recreational opportunities for Portlanders.

The athletic apparel and footwear leader and PP&R teamed up to enhance athletic facilities within the PP&R system. Lents Park was identified as a perfect candidate for field improvements.

The project included many areas of priority identified in the Lents Park Master Plan which was developed by the community and adopted by City Council in 2011. The addition of the new turf soccer field, a community-approved feature from the Master Plan, required the removal of the existing gazebo. As part of the PP&R and Under Armour community engagement process, residents were provided an opportunity to provide feedback on the future use of the gazebo. Under Armour, PP&R, and the community worked together to ensure that the improvements to the site provide benefit to all Portlanders and site users.

Lents Park is named after Oliver Perry Lent, a stonemason who came to Oregon in the 1850s to farm a 190-acre land claim. The area became the center of a growing farm community. George P. Lent, the eldest son of Oliver Lent, platted the town of Lents in 1892. In 1912, the Lents community was annexed from Multnomah County and incorporated into the City of Portland.

According to neighborhood reports, the original 5.2 acres of Lents Park had previously been used as a gravel quarry. During the 1940s and 1950s, an additional 32 acres was purchased from private property owners by the City of Portland in an effort to assemble all of the land between SE 88 & 92 and SE Holgate & Steele for park purposes. In 1953, a central plan was prepared by the City, proposing locations for a baseball stadium, athletic playing fields, tennis courts, community buildings, pathways, and parking areas. Construction on the stadium began in 1956.

The stadium was named after Charles B. Walker. From 1930-1934, he supervised playground softball teams as a playground leader and in 1934, organized the first industrial and commercial softball leagues. In 1935, he was appointed as the city's first Sports Director. From 1944-45, Walker served as an American Red Cross Field Director in Germany. Upon his return from the war, he helped organize the first men's and women's softball tourneys ever held west of the Mississippi. In 1950, he was appointed as the commissioner of the Amateur Softball Association (ASA) for the Portland Metro area. He also served as the Pacific Coast Vice-President of the ASA. He retired from the Parks Bureau in 1969 after 40 years of dedication and service to the game of softball.

In 2017, Lents Park’s playground was fully renovated, including the addition of new accessibility features, with funding from the 2014 Parks Replacement Bond. 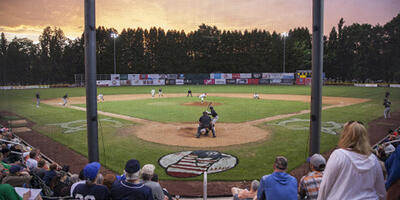 SE 92nd Avenue and Holgate Blvd
Portland, OR 97266
Get Directions